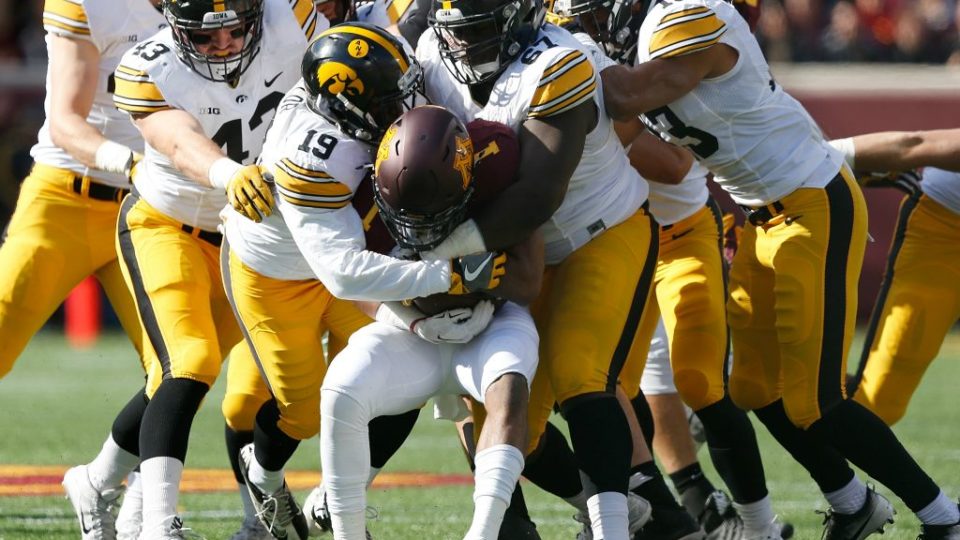 MINNEAPOLIS- For a unit that has been struggling over the past few games, the Iowa defense did not show any ill effects after being on the wrong side of a 38-31 Homecoming loss to Northwestern last weekend.

The message from the team was clear, however.

Potentially falling to 1-2 in Big Ten play with the meat of the schedule yet to come would have been disastrous for a team still with dreams of trying to make it back to Indianapolis on the first Saturday in December.

Instead, they escaped a brisk TCF Bank Stadium with a 14-7 win over their bitter rivals and made sure the bronze pig named Floyd stayed in its place at the Hansen Football and Performance Center for the next year.

The effort was not glamorous by any stretch of the imagination, but the Hawkeyes got the stops when they needed to and forced Minnesota to do things they were comfortable doing.

The defensive unit knows they had a rather poor performance against the Wildcats last week, and it would not have been surprising to see coach Kirk Ferentz try and spice things up a bit to give a team a little jolt leading up to today.

However, nothing changed between last Saturday and today personnel wise and Ferentz said the team did not do anything different in preparing for the Golden Gopher offense.

“I wish I could give you a one-word or one-sentence answer,” Ferentz said after the game.

One word did come to the minds of the Iowa defensive players after the game: responsibility.

“It’s all about everyone fitting their gaps and doing their job, and their job only,” junior linebacker Josey Jewell after the game.

The unit as a whole had a bigger sense of urgency their season could have been on the line had they lost to Minnesota and several players stepped up with strong individual performances to make sure that did not happen.

Brandon Snyder had a big fumble recovery in the first quarter and also a key interception late in the fourth quarter.

Greg Mabin forced a fumble and had excellent coverage on Minnesota’s final offensive play of the game on Brian Smith.

Manny Rugamba had his first career interception late in the first half to squash a Golden Gopher rally just before halftime.

The Hawkeyes as a whole have shown that they win close games on the road in the Big Ten. To be able to compete at a high level, this Phil Parker-led defense will have to continue to be the backbone of an Iowa team that has shown at times to be rather inept on offense.

That will have to continue next week as the Hawkeyes (4-2, 2-1) take on Purdue from Ross-Ade Stadium in West Lafayette, Indiana. Kickoff is set from 11:00 A.M. central time.