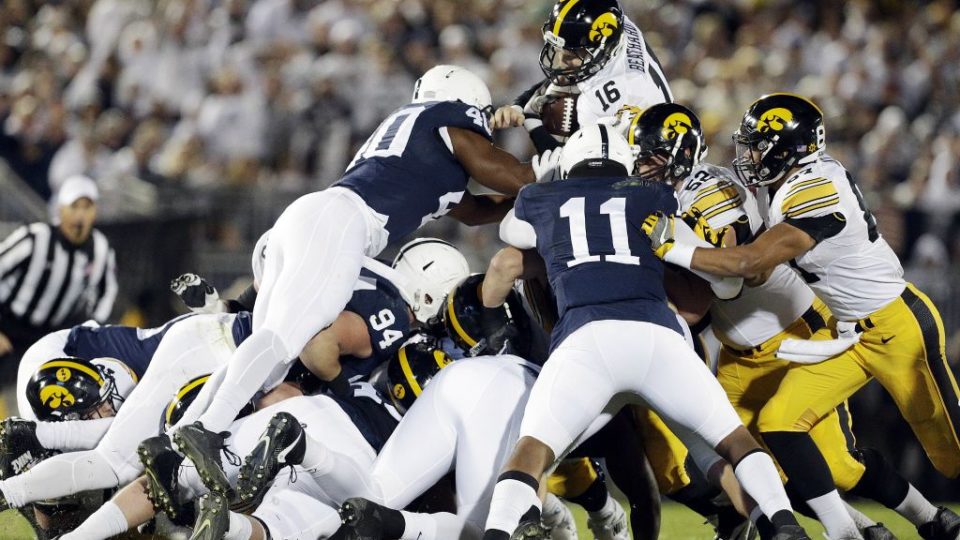 STATE COLLEGE, PA-The Iowa offense has been the hot topic over the past few weeks. It has been the ultimate Jekell and Hyde approach in which they either got it or they do not. After the 17-9 loss to Wisconsin loss two weeks ago, there was much clamoring for any kind of change to give the offense a bit of a jolt as the calendar turned to November.

There were many ideas and suggestions from all over the place. Could we see Akrum Wadley and LeShun Daniels on the field at the same time? Would Desmond King see the field on the offensive side of the ball (i.e. Jabrill Peppers at Michigan)? Could C.J. Beathard develop more chemistry with the wide receivers during the bye week?

All of the eyes were on the potential changes that offensive coordinator Greg Davis and company as Iowa stepped onto Beaver Stadium on Saturday night.

Unfortunately, the Hawkeye offense went from anemic to floundering like the catch of the day ready to be deep-fried.

There were subtle changes to the system. Daniels and Wadley did see the field together, and Wadley did score a touchdown late in the second quarter after lining up in the slot. As a whole, it was much of the same we have seen sans the Purdue game.

The 41-14 loss at Beaver Stadium all but makes Iowa path to a repeat B1G West title basically nonexistent as they still have showdowns with ranked Michigan and Nebraska teams on the horizon.

The offense managed a measly 234 yards of total offense compared to 599 total yards for the Nittany Lions.

Coach Kirk Ferentz called this loss and the season so far “unacceptable.”

Ferentz said in his opening statement that his team “capable of responding.”

“Where do you want to start?” he said after being asked to clarify.

There are a lot of different possibilities where one could start.

For a team that prides itself on running the ball effectively, Iowa had a total of 30 rushing yards on 26 carries. That is an average of 1.2 per carry. Let that sink in.

Quarterback C.J. Beathard said that the team had a good two weeks of practice and he felt the team was prepared for coming into a tough road environment.

“I just think we did not play as hard as were expecting,” Beathard said.

Things are going to have to get figured out in a hurry, as Iowa will have the tall task of trying to beat a Michigan Wolverine squad that is coming off a drubbing of Maryland and will be without a doubt the toughest opponent they have played all year.

Whether people have a glass half full or glass half empty philosophy, the only thing to do is move on, fix what you can control, and get ready for the next challenge that lies ahead.

Kickoff for the Hawkeyes and Wolverines will be at 7:00 P.M. from Kinnick Stadium next Saturday night.