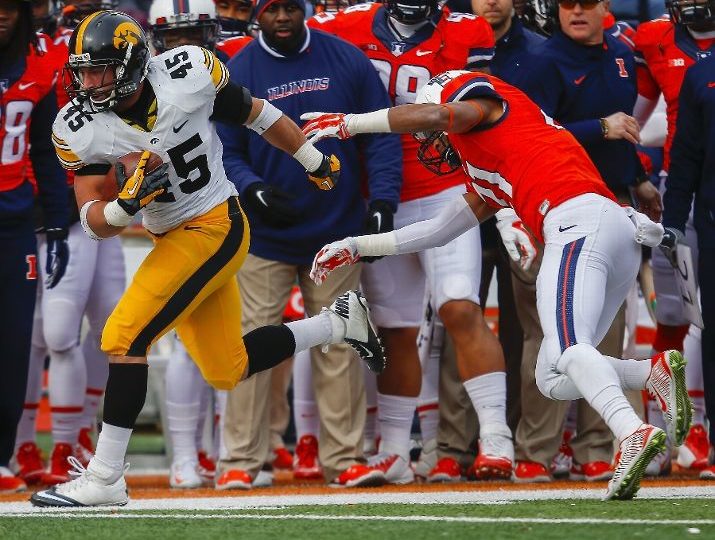 CHAMPAIGN, Ill. – It has been a Jekell and Hyde past couple of weeks for the Iowa football team. After the 51-14 drubbing in TCF Bank Stadium last Saturday, Iowa came into Memorial Stadium with potentially their season on the line.

The Hawkeyes ultimately responded the call and will leave Champaign with a 30-14 victory over the Illinois Fighting Illini this afternoon.

Jake Rudock had a nice game after struggling last weekend against Minnesota completing 14 of his 21 attempted passes for 210 yards and 2 touchdowns. His counterpart, CJ Beathard came in about midway through the fourth quarter and threw an outstanding touchdown pass to Damond Powell in the corner of the end zone to give Iowa the eventual 30-14 final score.

Offensively, the Hawkeyes put forth their best effort of the season in total offense, as well as rushing yards. Iowa amassed 587 yards of total offense, with 304 of those yards coming on the ground.

Coach Kirk Ferentz was proud of his team after getting a season saving victory.

“We just needed to win today,” Ferentz said in his press conference. “The yardage is not that important.”

Mark Weisman had the best game of his senior season to this point with 134 yards on 23 carries. After the game, Weisman talked about the success of the running back corps as a whole.

“Seeing that 300-yard rushing number was really cool,” Weisman said. “We just took it one play at a time, not looking forward or looking back.” “It is a credit to the guys up front for doing all the dirty work,” he added.

Another senior who stepped up big for Iowa was tight end Ray Hamilton. Hamilton is not known as a pass catching tight end, but for more of a blocking tight end. He ended up catch four passes for twenty yards, but the big kicker was the two touchdowns that he hauled in from quarterback Jake Rudock. Those were the first touchdowns as an Iowa Hawkeye for Hamilton.

He talked about the collective effort of the tight end group, which also saw fellow tight end Jake Duzey catch 3 passes for 110 yards including a 53-yard connection from Rudock to the junior tight end.

“I have gotten a hard time in the past about not having any touchdowns,” Hamilton said when asked how if his teammates have given him some playful jabs throughout his time at Iowa. “We just continue to work together as a group, and we are happy for each other,” he added when asked about his teammate Jake Duzey and the day he had. We just have to keep swinging and keep the foot on the gas pedal, nothing else matters.”

Defensively, it was a bounce back game for a unit that was blown of Minneapolis to the tune of 51 points. The Hawkeye defense only allowed 235 yards of total offense to the Fighting Illini.

The defense got the first points on the board for Iowa after Illinois quarterback Wes Lunt was flagged for intentional grounding in the end zone, which resulted in a safety and an early 2-0 lead for Iowa.

John Lowdermilk and Nate Meier led the Iowa defense with seven tackles apiece, Greg Mabin and Jordan Lomax each had six tackles, and Josey Jewell and Quinton Alston tallied five tackles. The defense desperately needed this game to get back some confidence leading up to the last two games of the season.

Iowa still somewhat controls their destiny in the Big Ten West. With Minnesota’s loss to Ohio State earlier today, the winner of the Nebraska-Wisconsin game will take over sole possession of first place in the division. That sets up well for Iowa, as Wisconsin and Nebraska are the two remaining teams on Iowa’s schedule.

“We have some things we need to work on,” Ferentz said about preparation for the next two weeks. “We’re playing two excellent opponents.”

Minnesota plays Nebraska and Wisconsin the two weeks of the season, so if Iowa wins out and Minnesota loses at least one of those games the Hawkeyes would be heading to Indianapolis the first weekend of December to play in the Big Ten title game presumably against Ohio State.

The start time for the game at Kinnick Stadium between Iowa and Wisconsin has yet to be announced. We will have the game on 89.7 KRUI. Jeremy Meyer and Blake Jorgenson will have the call next Saturday, so be sure to listen to the battle between the Hawkeyes and Badgers next Saturday.