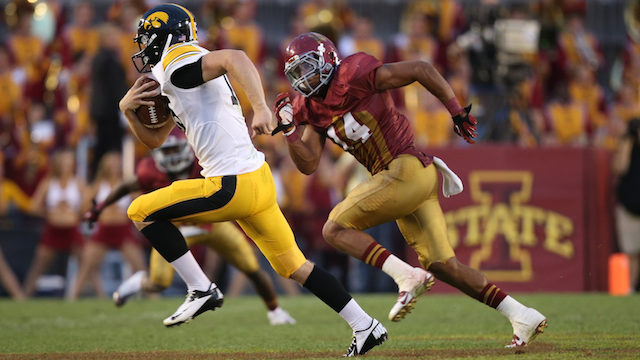 As the annual Cy-Hawk rivalry game is set to kickoff this weekend in Iowa City, both the Iowa Hawkeyes and the Iowa State Cyclones have some question marks that need to be addressed on Saturday, as well as the future.

For the Hawkeyes, the most urgent question of them all is who will be the placekicker. Marshall Koehn has gone 2-5 to start the season, and freshman Mick Ellis missed his only attempt in last Saturday’s win over Ball State. The fact that head coach Kirk Ferentz would not name a clear cut favorite for kicking duties makes things a little murkier than they already were. Koehn will likely get another shot this weekend, but do not be surprised if Ellis, who lost his redshirt last weekend, gets the call if Koehn once again falters.

Another big question for Iowa is when the running game will finally start to make some noise on the field. The leading rusher for the Hawkeyes after two weeks is quarterback Jake Rudock, who has 11 rushes for 35 yards on the season. The running back group of Mark Weisman, Jordan Canzeri, LeShun Daniels Jr., Damon Bullock, and Jonathan Parker have combined for 181 yards on 62 carries, which divides out to just under three yards a carry. They need to start showing up in a big way and not forcing Jake Rudock to chuck the ball 93 times in two games to overcome late deficits.

The final big question surrounding the Hawkeyes is the health of two of their most important players, Brandon Scherff and Drew Ott. It was reported by multiple sources on Tuesday that Scherff underwent surgery on his right knee and would likely miss two to three weeks.

Coach Ferentz would not confirm in his weekly conference call that Scherff had surgery, instead calling him day-to-day. If Scherff were to miss those two to three weeks, he would miss this weekend against Iowa State, the following weekend against Pittsburgh on the road, and potentially the Big Ten opener September 27th against Purdue in West Lafayette. Iowa should be able to survive without Scherff for that time frame as Ike Boettger stepped in admirably against Ball State and looks a capable replacement for Scherff should he have to miss any time.

Ott, on the other hand, appears to come away virtually unscathed after his involvement in an accident early Monday morning in Iowa City. Ott was on his moped when a car turned in front of him and collided with the defensive lineman. He suffered what is being called “road rash” after being examined at the University of Iowa Hospitals and Clinics. Kirk Ferentz also called Ott day-to-day and barring any setbacks should be ready to go for Saturday’s tilt with the Cyclones.

Iowa State comes into Iowa City looking for their identity. After a 34-14 loss at the hands of FCS powerhouse North Dakota State in Week 1, the Cyclones entertained the Wildcats of Kansas State last Saturday only to see them blow a 28-13 and fall to the ranked Wildcats by a score of 32-28. Iowa State ranks near the bottom in rushing yards per game, passing yards per game, and points scored per game.

Quarterback Sam Richardson is leading the charge through the air as well as on the ground for the Cyclones. He has been one of the few bright spots for a team that has disappointed to begin their 2014-2015 campaign. Injuries and personal issues have stripped the team of some key players. Wide receiver Quenton Bundrage tore his ACL in the opener against NDSU and starting right tackle Jacob Gannon quit the team for “personal reasons” days before their game against Kansas State.

The Cyclones do have some playmakers, however. Freshman wide receiver Allen Lazard out of Urbandale, Iowa, as well as Jarvis West will be asked to shoulder more of the load through the air for coach Paul Rhoads. Aaron Wimberly, who has accumulated 23 carries for 75 yards and 2 touchdowns over the first two weeks, leads the ground attack.

The Cyclones may not look as good on paper as the Hawkeyes, but when there is a rivalry like Iowa and Iowa State stats do not mean as much. Both teams will be amped up and ready to get this game started.

This Cy-Hawk game is sure to be one of the most exciting games in recent memory and Kinnick Stadium will be the go to place Saturday afternoon at 2:30. We will have the game live on 89.7 KRUI and also online at krui.fm with pregame starting around 2:15.