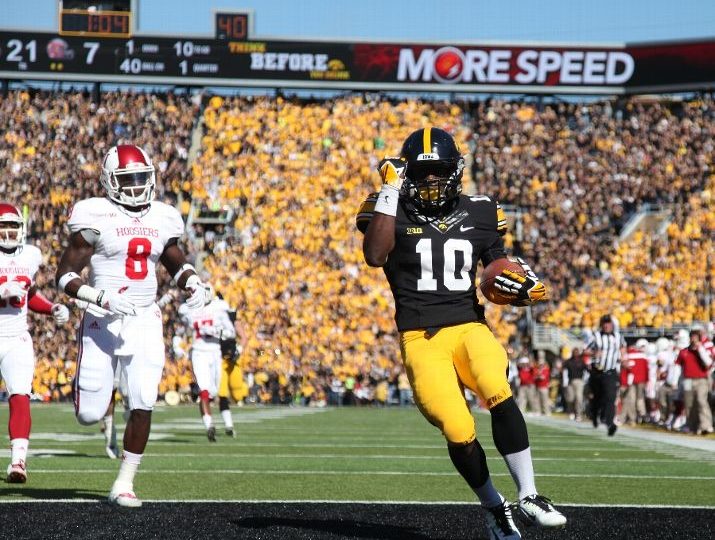 IOWA CITY, Iowa – If you like offensive firepower and tons of points, look no further then what happened inside Kinnick Stadium this afternoon as the Iowa Hawkeyes and the Indiana Hoosiers squared off in Iowa’s annual Homecoming game

What looked like to be a classic, low-scoring Big Ten game where defense reigns supreme quickly turned into a barn burner that lit up the scoreboard and got all 68,590 fans wired for sound.

When the dust finally settled, Iowa came out victorious with a 45-29 victory over the Hoosiers.

The Hawkeyes could not get anything going offensively until midway through the first quarter when junior quarterback Jake Rudock found tight end Jake Duzey for a 12-yard touchdown pass to put an end to a 15 play, 80 yard drive that took 7:13 to give Iowa the first lead of the game at 7-0.

Iowa was far from finished scoring in the first quarter, however. On the ensuing drive for Indiana, sophomore cornerback Desmond King intercepted a Nate Sudfeld pass and took it back 35 yards for the second touchdown in just over a minute for the 14-0 Hawkeye lead.

The next offensive play from scrimmage was a familiar sight for Hawkeye fans as Jake Rudock connected on a deep pass to Damond Powell for a long touchdown reception to give Iowa a commanding 21-0 lead. It was the longest play from scrimmage this season so far for Iowa totaling 72 yards on the catch and run.

Rudock completed 19 of 27 passes for 210 yards and 2 touchdowns, once again asserting himself as the starter for the Hawkeyes. Backup C.J. Beathard saw little action and only completed 2 of 5 passes for 9 yards.

“Those big plays are huge for us,” Rudock said after the game. “They help us move the ball like we want to on a regular basis.” “Now we need to play an entire game like we did in the first half today.”

After a 83-yard touchdown run from Indiana running back Tevin Coleman to cut the lead to 21-7, Iowa responded right back on their very first play from scrimmage after the Hoosier touchdown when Jonathan Parker scurried for a 60-yard touchdown run to give the Hawkeyes the 28-7 lead at the end of the first quarter.

Parker was asked after the game how he felt about his game overall, especially since he has had some bumps in the road over the course of the season.

“I like having people miss and using my speed,” Parker said. “I’ve taken these struggles as life lessons. It’s football, things happen.”

Things got a little more interesting in the second quarter. Indiana rattled off two touchdowns in a span of about three minutes. Hoosier quarterback Nate Sudfeld delivered a 13-yard pass to Nick Stoner before another long touchdown from Tevin Coleman.

Iowa added a Marshall Koehn field goal and a 1-yard touchdown run from Mark Weisman to give Iowa a 38-21 halftime lead.

The second half was much quieter, as the teams combined for 15 points total.

The teams traded touchdown runs near the beginning of the fourth quarter. Mark Weisman added his second 1-yard touchdown of the afternoon, while Tevin Coleman added his third touchdown with a 69-yard run on Indiana’s ensuing drive for the 45-29 final score after a two-point conversion by the Hoosiers.

Coleman was the one guy the Iowa defense could not stop. On the day, Coleman had 15 carries for 219 yards and 3 touchdowns. He is now over the 1,000-yard rushing mark in just 6 games played.

With the offense in general struggling all afternoon long, Coleman carried the Hoosier offense when Sudfeld left the game with an injury and did not return.

Indiana relied on true freshman quarterback Chris Covington to handle the reins as the signal caller, and things did not turn out the way that the Hoosiers had hoped.

Covington only completed 3 of his 12 passes for 31 yards and 2 interceptions. What already was a dormant offense seemed to be even more puzzled once Covington entered the fray.

The defense capitalized on playing against the true freshman in Covington and got consistent pressure, which led to sacks and a lot of scrambling out of the tackle box. Nate Meier led the Hawkeyes in tackles with 10, followed closely by Desmond King and Quinton Alston with 7 each. Jordan Lomax and Bo Bower had the other interceptions on the day along with Desmond King for the Hawkeye defense.

Overall, coach Kirk Ferentz was happy about the Homecoming victory for the Hawkeyes.

“A little bit unusual of a football game, different than we’re used to being in, especially that first half,” Ferentz said. “We’ll enjoy this game today. We’re feeling good about that, because bottom line is we won a Big Ten football game. We won here and that’s important.”

One of the things Ferentz touched on a lot in his postgame press conference with the play of senior Tommy Gaul. Gaul stepped in to the center position on the offensive line after starting center Austin Blythe was shifted to right guard after starter Jordan Walsh left with an ankle injury and did not return.

“That’s one of the good stories for sure today,” Ferentz said. “We talk about next man up all the time. Everybody loves him here. Tremendous young guy as well.” “There’s a lot to be said about experience, especially with linemen. Experience is only good if it’s positive, and he’s done that,” Ferentz added.

The Hawkeyes, who advanced to 5-1 with the victory, will travel to Maryland to play the Terrapins next Saturday afternoon in the first ever meeting between these new conference opponents in football. Kickoff is set for 11:00 central time.