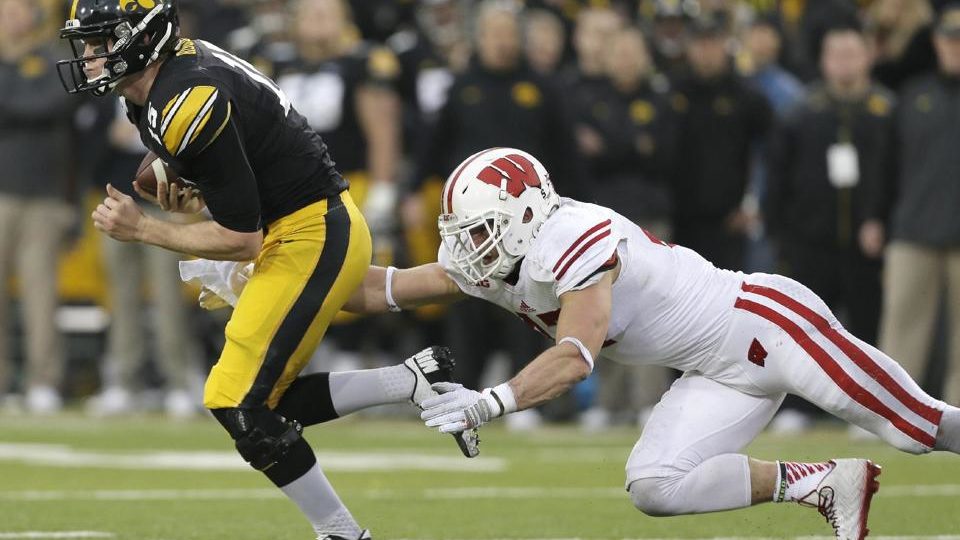 IOWA CITY, Iowa – The formula was simple for Iowa: win the remaining two games at home and get some help from Minnesota. That would have been enough for Iowa to clinch the Big Ten West and a berth in the Big Ten Title Game.

A season that started out with talk of Iowa being a dark horse to win the Big Ten will end without a trip to Indianapolis as Wisconsin (9-2, 6-1) won its third consecutive contest against the Hawkeyes (7-4, 4-3) 26-24.

It was a tale of two halves for the Hawkeyes, putting up 21 points in the second half after scoring just 3 in the first half.

The game seemed all but over after an 88-yard Melvin Gordon run early in the second half that put Wisconsin on the Iowa 4-yard line. However, the defense stood tall four times and that was enough to spark the offense.

“Historically, we have won games where this type of thing [goal line stand] happened,” Iowa Head Coach Kirk Ferentz said. “It would have been big today, had we gotten a chance to get that last field goal attempt. But it never came around.”

Iowa had not scored a touchdown against Wisconsin since 2010 when Jake Rudock found Kevonte Martin-Manley for a 20-yard touchdown that brought the Hawkeyes within a score after Jordan Canzeri converted the two-point run.

Rudock finished the night with 311 passing yards and 2 touchdowns through the air. He added 42-yads on the ground and a rushing touchdown. All against the #1 defense in the nation.

“Jake did a great job, I think of running the offense, executing, and make some really good throws,” Ferentz said. “He competed and played about as well as I think that he has during his time here and he’s done a lot of good things for us.”

Wisconsin’s Melvin Gordon came into the game fresh off an NCAA record setting 408 yards against Nebraska and became the number one priority for Iowa to stop. Gordon mustered 207 yards rushing, 88 of which came on one play, and added 64 through the air while becoming the fastest player to reach 2000 rush yards in a season.

Iowa would twice bring the game within two points in the fourth quarter but could not overcome the deficit it had created for itself in the first half. Iowa had just 141 yards in the first half, it added 271 in the second.

In the end, what hurt Iowa was the defense’s inability to get off the field. Wisconsin converted seven of its 13 third down attempts. The biggest play was a 35-yard reception for Gordon on 3rd and 13 early in the fourth quarter that set up his game winning 23-yard touchdown run.

“We never got mad with the third downs,” Defensive tackle Carl Davis said. “We were optimistic that we would go out there and get off the field and then get the win [which didn’t happen].”

After Rudock scampered in for the 3-yard score, Ferentz had a miscommunication with the officials about the spot of the ball for the two-point conversion. That timeout would come back to haunt the Hawkeyes as Wisconsin would take over with 5:01 left in the game and milk the clock down to 0:00.

“We tried to signal to get the ball over on the left side there and I thought that had been communicated,” Ferenz said. “In retrospect, I wish I had come down tot the sideline and talked to one of the officials on our boundary and tired to get that corrected.”

Iowa will have one more chance to improve its bowl position when it takes on the Nebraska Cornhuskers (8-3,4-3) on Black Friday. Iowa will have to make sure to not let this loss affect the play. Davis said this team won’t have to worry about that.

“We are a resilient team and we have done it all year long,” Davis said. “After a loss, we bounce back with wins. We just have to go back to work.”

Iowa has the short week as it prepares to take on Nebraska this Friday at 11 a.m. at Kinnick Stadium.