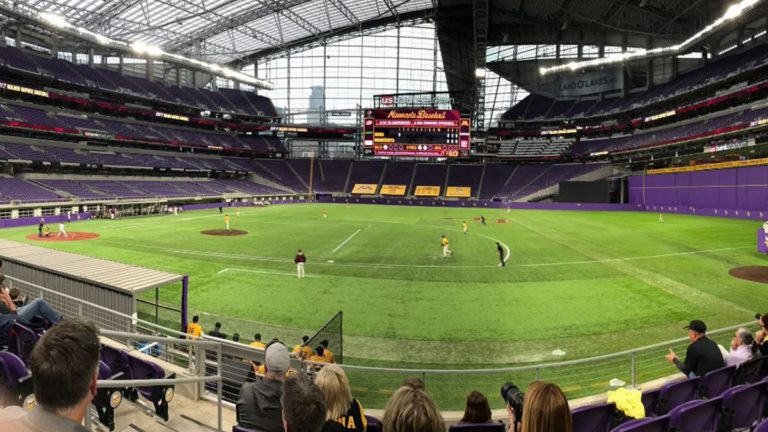 IOWA CITY, Iowa – The Hawkeyes were playing at full capacity going (2-1) this weekend at the DQ Classic. The Hawkeyes had a closer than wanted (7-6) win against Hawaii, a surprising (7-3) win against Oral Roberts, and a close (6-3) loss against Minnesota.

The first game of the weekend against Hawaii featured the Iowa batters once again being on fire as they chalked up a season high 17 hits and 7 runs with 2 HRs. The final of this game wasn’t a real representation of how this game went as the score was 7-3 going into the final inning of the game until the Rainbow Warriors scored 3 runs in the ninth until the Hawkeyes could close the game out with the tying run at third. Besides for the 9th inning, Iowa’s pitching was a highlight with ace Nick Gallagher pitching a career best 8 innings allowing only 3 runs and 7 hits.

After an offensive game on the previous day, Iowa didn’t slow down on offense as the had a barnburner of a win over Oral Roberts. The game started with Iowa hopping ahead 3-0 in the top of the first inning after first baseman Jake Adams drove in three with a home run. Iowa proceeded to homer again from Matt Hoeg in fourth. However, with Iowa batting well and getting in runs, Oral Roberts was doing the same. Scoring 4 runs through 6, tightening the game up to 5-4 in the six. Iowa ended up extending the lead to 7-4 in the 8th, securing the victory. Iowa would finish with 10 hits during the game with 3 HRs and allowing only 7 hits. Overall a great win for the Hawkeyes.

Iowa did have a low point in the weekend. On Sunday against Minnesota both pitching and hitting for the Hawks struggled to be successful. Iowa was able to keep the game close at 4-3 with a first inning bomb from Robert Neustrom. That was the best Iowa would do from the plate as they only got 4 hits with a game hitting average of .138. The game however was sitting at 4-3 until the 8th inning where Minnesota knocked in two more runs to have the final of 6-3. Iowa gave up a total of 9 hits with 6 runs.

McCoy, Whelan, and Neustrom all were at the top of their game this week. Neustrom hitting a bomb of a home run on sunday extended his hitting streak to 10 games. Chris Whelan again was

Freshman Ben Norman had a breakout weekend in Minneapolis. He went .500 (6-12) at the plate with 2 runs scored and 3 RBI’s. Going into the weekend he was batting (2-13) which was one of the lowest out of Iowa starters. Going from batting .154 to .320 in one weekend is quite the accomplishment.

Next Week Preview:
Iowa takes on Northern Illinois at home on Tuesday March 7th at Duane Banks Field. Then over the weekend they head down to Florida to take on Villanova, Bucknell, and a double header against Lehigh University.