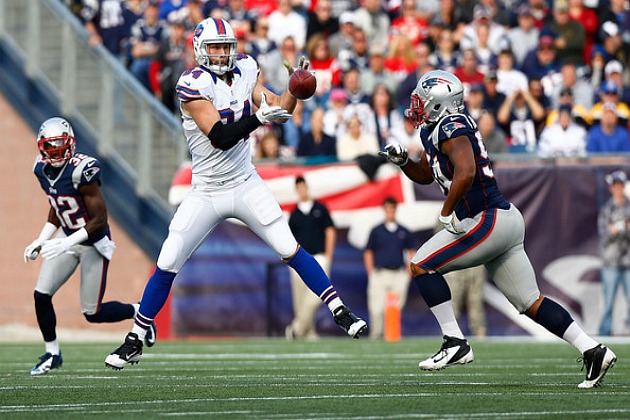 …and other Hawkeyes and Cyclones in professional football across North America.

Johnathan Babineaux, DT, Atlanta: Babineaux’s statistics aren’t mind blowing.  He has just 23 tackles, 3.5 sacks and a forced fumble.  He is, however, on one of the NFL’s best teams, the Atlanta Falcons.  The Falcons just lost their first game of the year last Sunday at New Orleans. Eight straight wins before Sunday’s setback to an inspired Saints team isn’t a bad opening to a season.  Babineaux was a senior defensive tackle for Iowa’s last Big Ten championship team in 2004.

Scott Chandler, TE, Buffalo: Of the former Hawkeyes now playing in the NFL, Chandler is having the best season for an offensive player.  He continues to build a reputation of dependability in Buffalo after wandering around practice squads in the league before landing on the state of New York’s third team.  This season, Chandler has 27 catches for 350 yards and five touchdowns.  He had five catches for 65 yards and a touchdown in Buffalo’s 37-31 loss at New England last Sunday.  Chandler needs just one more touchdown to match his season total of 6 last year, and he has seven more games to do it.  Chances are he will eclipse last season’s total by tacking on a few more scores for a Buffalo team that has few other receiving weapons and a really poor defense.  Also, Chandler has a 49.1 ownership percentage in fantasy football (according to espn.com’s player profiles), whatever that means.  Hooray!

Dallas Clark, TE, Tampa Bay: Clark makes this list after being cut by Indianapolis after the 2011 season and resurfacing on a new-look, winning Tampa Bay team.  It’s been a tough couple of years for Clark, who was cut by the Colts after suffering numerous injuries in his abbreviated 2011 season (the team was pretty bad, too).  His glory years of running complex routes to catch Peyton Manning’s bullets are obviously over, but Clark is still serviceable as evidenced by his one catch in Tampa’s 34-24 win over the Chargers last Sunday.  One catch?  How did he make this list, you ask?  It was a sly little touchdown for Clark, and how sweet it was.  Hey, if you’re going to live out your last years in the NFL with dignity, better it be as a solid role player on a good team.  Clark’s numbers on the year are 20 catches, 197 yards, and 2 touchdowns.  He’s a role player.  Let’s not forget, though, that Clark had one of the greatest seasons for a tight end in NFL history in 2009 when he caught 100 Manning passes for 1,106 yards and ten touchdowns.  He is beloved by Indianapolis and the state of Iowa.

Chad Greenway, LB, Minnesota: Greenway continues to build off his spectacular 2011 season when he was a Pro Bowl alternate, and the Vikings are finally winning games.  Greenway already has 99 tackles (two of which were sacks) in 2012 and snatched his first interception of the season in Minnesota’s 34-24 win over Detroit.  A former first-round pick out of Iowa in the 2006 NFL Draft, Greenway has been as reliable as the Vikings’ management could have asked.  He was one of Iowa’s greatest linebackers of all time, and he’s one of the NFL’s tackling machines. He’s posted at least 100 tackles in what will be five of his first six seasons (he missed his rookie season with a knee injury). He’s at 99 right now.  I derive the above statistic based on the presumption that he will get at least one more tackle to get into triple digits for 2012.  The one year he didn’t get past 100?  That would be 2009, when he finished with 99.

Brandon Myers, TE, Oakland: What’s the deal with all these Hawkeye tight ends doing big things in the NFL?  I’m not sure, but it’s pretty neat.  Myers leads the Raiders in receptions with 44, and is second on the team in receiving yards  with 499.  He also has two touchdowns.  Like Chandler, Myers finally found a home, it’s just too bad that it happens to be in Oakland.  Nonetheless, the guy from Prairie City, Iowa, has really come into his own.  Myers was a part of some tough-luck, under-achieving Iowa teams before helping the Hawks win nine games in 2008.  He was fantastic in the 2009 Outback Bowl, catching a load of Ricky Stanzi passes on third down while throttling South Carolina, 31-10.

-Shonn Greene, RB, New York had 567 rush yards and five touchdowns, despite rushing through an awful offensive line and playing on a generally bad Jets team.

-Tony Moeaki, TE, Kansas City had a nice game on Monday Night Football this past Monday, catching three passes for 68 yards in the Chiefs’ 16-13 OT loss to Pittsburgh.  Two of those big catches came on a frantic drive toward the end of the game. Also, Kansas City is another generally bad football team

Now we must spotlight individuals outside the NFL, or somehow connected to Iowa’s public universities.

Leonard Johnson, DB, Tampa Bay: Undrafted out of Iowa State in last year’s NFL Draft, Johnson has been a heck of a signing for the Buccaneers.  In last Sunday’s 34-24 win over San Diego, Johnson had an 83-yard interception return for a touchdown.  He has three interceptions this season to go with 15 tackles.  He was pretty good as a Cyclone, too.  Sometimes these Iowa State guys have to fight a little harder for the credit they deserve.

Drew Tate, QB, Calgary Stampeders: Former Iowa quarterback Drew Tate has found himself a professional career in Canada.  The short-statured, (once) short-fused Tate ranks in the top three in passing touchdowns at Iowa, and high in other categories in the annals of Iowa football history.  He is perhaps best known for blasting a 56-yard touchdown pass to Warren Holloway as time expired to give Iowa a 30-25 win over LSU in the 2005 Capital One Bowl.  Fast forward to 2011, and Tate took over the starting quarterback role for Calgary late in the season, getting the Stampeders to the playoffs.  Last Sunday, Tate engineered his second legendary, game-winning touchdown pass when he found Romby Bryant wide open for a 68-yard bomb with 20 seconds left to give Calgary a 36-30 victory over the Saskatchewan Roughriders in the Western Semifinals.  It was Calgary’s first playoff win since 1994.  Tate and his wild, wild horses will now face the British Columbia Lions in the Western Final.