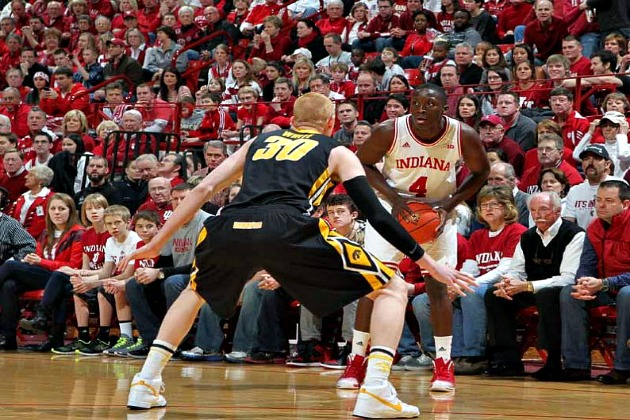 Iowa (18-11, 7-9) came into Saturday’s game at Assembly Hall having won its previous game against a fading Purdue team by 10 points at home.  That win–a sloppy, defensive-oriented game–came without starting point guard Mike Gesell in what has been an up-and-down, sometimes frustrating year.

Coach McCaffery said prior to the Purdue game that Gesell would be out a few weeks with a “stress”-related foot injury.  Gesell’s absence is predicted last until the end of the regular season.  The plan is to have Gesell back for the Big Ten tournament.

So, going into the game, realistic fans and media members looked at the road trip as an inevitable lump to climb over, with the bigger picture being Iowa’s last two games (both at home) and the Big Ten tournament.

Iowa lost, by the way, 73-60.  The team got beat in several key categories.  In the first half, Iowa committed 14 turnovers and scored just 14 points.  For the game, Indiana attempted 42 free throws–eighteen more than Iowa, a team that typically wins when it gets to the line often and does not return the favor to its opponents.

Indiana, meanwhile, came home to its warm, loud arena to face Iowa having lost its last game at Minnesota, 77-73, on February 26th.  Did anyone humor the idea of the Hoosiers actually losing two in a row–with the second at home against a rebuilding Iowa team?  Sure, some did.

The rest of us–the clear, rational thinkers–already accepted the fact that Indiana is too good this season to lose two in a row and a second game at home this season (Wisconsin won a grinder at Assembly Hall on January 15th).  Look on the bright side, too.  It was a 13-point defeat, on the road, to a likely #1 seed at the NCAA tournament.  At least it wasn’t a repeat of Iowa’s last trip to Bloomington–a 103-89 loss that could be best characterized as a mental and physical breakdown.

Now, Iowa presses on.  With its last two games at home, the team has a last chance to make its post-season tournament resume (NCAA or NIT) as lustrous as possible before the boom-or-bust prosperity of the Big Ten tournament begins.

Rolling into Carver-Hawkeye March 5th and March 9th are Illinois and Nebraska, respectively.  In mid-January, Illinois looked to be in a serious funk after a spectacular non-conference performance.  That funk entailed a 2-7 start in conference, but the Illini have now won 6 of their last 7 games, including a win over #1 Indiana in Champaign.  The team seems like a good bet for the NCAA tournament after also beating Gonzaga, Butler, Ohio State and Minnesota.

Suffice it to say, a win over Illinois would help the win-loss column and stand out as one of Iowa’s better wins this season.  Interestingly, Iowa had arguably more quality conference wins last season, sweeping Wisconsin and beating Indiana and Michigan at home.

As for Nebraska, first-year head coach Tim Miles’ team comes in this Saturday, Iowa’s senior day.  That doesn’t carry too much weight, as Iowa’s only contributing senior is Eric May.  The real importance of the game is simply winning it to finish 9-9 in conference (if Iowa beats Illinois first) and to exact a bit of revenge for Nebraska’s 64-60 win in Lincoln, a game delayed because of snow storms and not seen by a typical national audience of hundreds of thousands of people because no television arrangement could be made on such short notice.  That was probably a good thing, because Iowa blew a 19-point lead to the lesser Cornhuskers.

Whatever the uncertainty surrounding Iowa may be, fans and players should feel a little more confident knowing one talking head has a straightforward path for Iowa to reach the NCAA tournament–and believes the team will walk it.  Doug Gottlieb, a former ESPN and current CBS Sports basketball commentator known for his bluntness, said during Sunday’s Michigan-Michigan State halftime show that if Iowa wins out at home and wins one game in the quarterfinals of the Big Ten tournament, it should get into the big dance.

That would leave Iowa at 21-12 overall.  Participating in the Big Ten, as good as it is this year, should carry the Hawkeyes toward where every team wants to be in March.