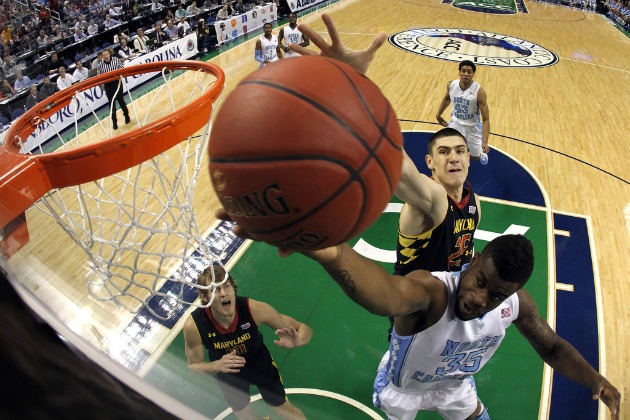 Iowa got its signature road win (and one of its best wins of the year) when it travelled to Charlotesville, Virginia and beat Virginia, 75-64, on Wednesday night.  Virginia was one of the 2013 NIT’s #1 seeds and had not lost an Atlantic Coast Conference game at home all year.  So, the Hawkeyes move on to Madison Square Garden in New York City with a record of 24-12 to play 2-seeded Maryland in the semifinal.  Here is a primer of the two semifinal games, Tuesday, April 2nd.

Brigham Young vs. Baylor, 6 p.m. CT, ESPN2: Brigham Young had a solidly ho-hum year in their basketball league, the West Coast Conference.  The Cougars got swept by the conference’s best teams, Saint Mary’s College and Gonzaga.  They did, however, go 10-6 in league play and earned a 3-seed in the NIT likely because of what BYU did last year with Jimmer Fredette leading them to the Sweet 16.  He’s gone now, but it turned out to be a good thing letting BYU in the NIT.  They went into Hattiesburg, Mississippi–home of the Southern Miss Golden Eagles–and thoroughly beat one of the NIT’s #1 seeds, 79-62.  The Cougars are led by guard Tyler Haws, only a sophomore but one of the nation’s top scorers at 21.6 ppg.  He had 25 points in their demolition at Southern Miss.  Looks like they’ve found a glimmer of Jimmer.  Now the Cougars play Baylor in New York, a team that beat them earlier this season in Waco, Texas by double digits.

That Baylor team is led by guard Pierre Jackson, also one of the nation’s top scorers (19.7 ppg) and assists leaders (6.9 apg).  He’s only 5’10”, but can dunk over power forwards and shoot from anywhere on the floor.  He’s one of the quickest players in the country and last year was a major contributor to the Bears’ NCAA Tournament run to the Elite 8, where they lost to eventual national champion Kentucky.  This year, the Bears struggled in Big 12 conference play–at one point losing 8 of 11 games–before beating then-No.4 Kansas, 81-58.

Outside of the Kansas win, the Bears didn’t have enough quality non-conference victories (Baylor did win at Kentucky) or conference wins (beat conference bottom dwellers like Texas Tech, Texas, and TCU while losing to everyone else) to get an NCAA Tournament birth.  Still, this team is dangerous and will give Brigham Young all it can handle defensively.  The Bears rank in the top 45 nationally in points per game, assists per game, and rebounds per game.  In its first NIT game, Baylor scored 112 points against Long Beach State University.

Iowa vs. Maryland, 8 p.m. CT, ESPN2: If you’ve been following Iowa this year, you have witnessed a young team that got red-hot a little too late, but has shown that it can duel with anyone in the Big Ten.  Someone has to lose the duel, unfortunately, and Iowa did many times by a handful of points–especially early and midway through the conference schedule.  Indiana at home.  Michigan State at home.  Wisconsin on the road.  There are more, but you get the picture.  Iowa got left out the NCAA Tournament because it didn’t have enough quality wins, despite going .500 in one of the nation’s deepest conferences.

Iowa has already grabbed the reins of momentum for next year in winning three NIT games (Indiana State, Stony Brook, at Virginia, all by double digits).  The 3-seeded Hawkeyes now find themselves in New York taking on 2-seeded Maryland in the semifinal.  The man that led the gallup to New York City is the versatile point guard/off-guard Devyn Marble, who is averaging 25 points per game during the Hawks’ run through the NIT.  Sophomore forward Aaron White is the team’s most intimidating dunker and specializes in drawing fouls with his long body.  He is also the team-leader in rebounds at almost 6 per game.  Mike Gesell had been the point guard for most of the year, but has been nagged by a foot injury as of late.  Whether he will play some minutes at shooting guard (or possibly at point guard because of Marble’s versatility) against Maryland is yet to be seen.  Inside men Adam Woodbury and Abodunrin Gabriel Olaseni bring a heavy rebounding influence and can score in small doses.  Outside shooters Eric May, Zach McCabe, and Josh Oglesby are erratic at times, but were effective against Virginia in hitting three-pointers (8 of 17).  May is one of the team’s best defenders.  Iowa is tenth in the nation in rebounds per game (39).  Iowa led the Big Ten in field goal percentage defense and three-point defense.

Maryland is in a rebuilding stage that has mirrored Iowa’s resurgence under Fran McCaffery.  After Gary Williams retired after 22 years at Maryland following the 2010-11 season, former Texas A&M coach Mark Turgeon was hired as Maryland head basketball coach.  Turgeon got to the NCAA Tournament every year of the four years he was with the Aggies.  Last season, Turgeon’s team went 17-15 and 6-10 in the ACC with no post-season birth.  This year, the Terrapins are 25-12 after going 8-10 in the ACC.  They will join the Big Ten next year along with Rutgers.

Maryland’s best wins this season came over Duke.  The team beat the Blue Devils at home and in the ACC Tournament.  Their NIT path also mirrors Iowa, having won two home games against overmatched opponents before traveling to a #1-seed in Alabama and winning, 58-57.