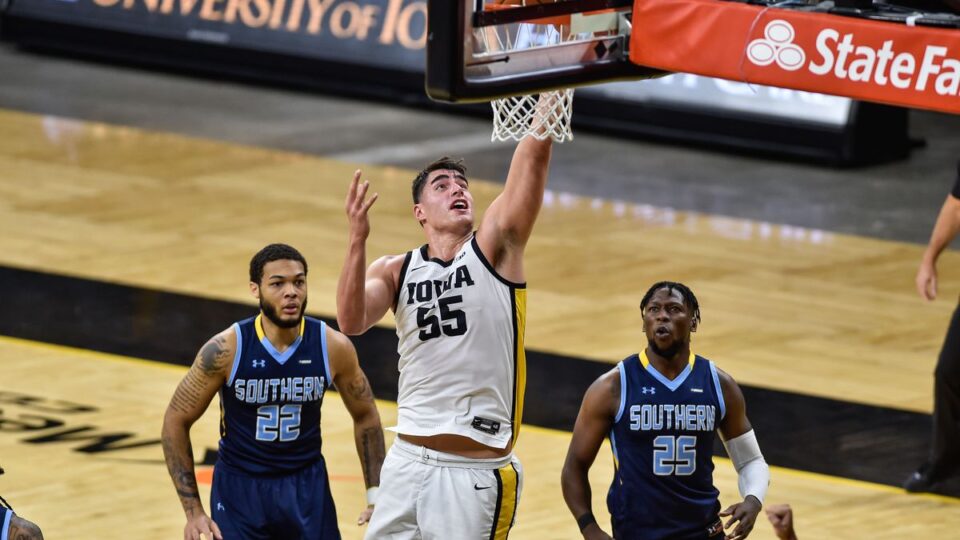 It was a pretty amazing start to the weekend for Hawkeye fans across the country with big Hawkeye football and basketball wins. Hawkeye football started the day off by beating Nebraska 26-20 with a late-game interception, and then Luka Garza dropped 41 points in a fast-paced win for the Iowa Hawkeyes over the Southern University Jaguars.

The non gamstop casinos bring another dimension of excitement and thrill of watching sports games and matches. And luckily, today, you can get access to betting at any device whenever and wherever you are.

Although we typically see Luka Garza lead this team to victory, this one was something special. Garza had 36 points, shot 12/12 from the field, grabbed 7 rebounds, and had 3 blocks… in the first half of the game. He had more points than the entire Jaguars team in the first half.

Garza ended up finishing with 41 points, but the biggest ‘wow’ moment of the game was Southern University deciding to not double team the heavy National Player Of the Year favorite. When asked about the way Southern decided to guard him in the post-game press conference, Luka Garza had this to say.

“Our team was just being really unselfish moving the ball around. I think they were trying to double at points but we were pushing in transition to where they couldn’t double… the next time a team plays a zone like that against us, we’re going to bury them.”

As expected, Garza did not play too much in the second half due to the blowout and wanting to avoid possible injury. Thus, it was time to showcase all the other firepower the Iowa Hawkeyes have.

This tournament has bring a lot of surprises, check out the NBA rookie odds that have happened during this season.

Junior guard Joe Wieskamp had a stellar game shooting 4-6 from beyond the arc, cashing in 16 points for the Hawkeyes. Freshman standout Keegan Murray from Cedar Rapids had 9 points, shooting 3-4 from the field and making his lone three-point attempt. Finally, beloved senior Jordan Bohannon finished with 5 points, but was passing the ball all around the court and finished with 7 assists.

While this was a great team win like always with the Hawkeyes, head coach Fran McCaffery offered some places where the team could improve, related to the team getting ‘too comfortable’ and the lack of rebounding. Coach McCaffery stated:

“I think you want them [the players] to hold themselves accountable but you have to be careful, and I was on them, I was on them hard… but the one thing that upset me was their [Southern] offense rebounding and our lack of offensive rebounding… get to the offensive glass.”

This, of course, was in response to the Jaguars out rebounding the Hawkeyes on the offensive glass by 19-10.

These Iowa Hawkeyes are a special group of players, and they know where they need to improve. But from the outside looking in, there is not a whole lot to improve on in these first two games into the season. This Hawkeye team is on a roll.