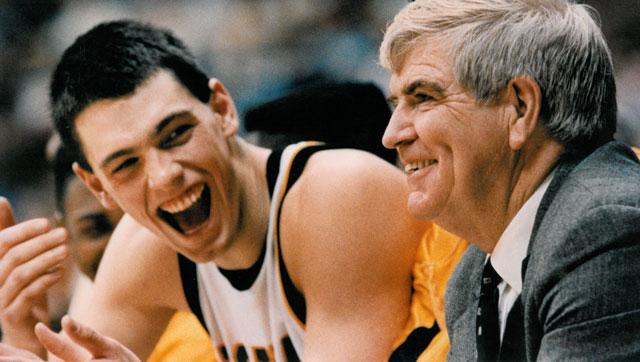 An escape. They’re dramas. Plays. An act on the gridiron. A dance on the hardwood. Sports are so popular in today due to the world needing an outlet. A place to diverge our attention from the everyday life. Baseball, the national pastime. Football, the modern-day gladiators. Athletics are so popular due to their ability to create storylines. Magic vs Bird. Steelers and Cowboys. Yankees and Red Sox. Rivalries drive sports. But, even more so than rivalries, fans fall in love when the sports meet the outside world.

Iowa has had the best of luck with these kinds of stories. Just this year, the Kinnick Wave captured the hearts and minds of the nation, even winning the annual Disney Spirit Sports Award. But, if you had the chance to be at the Purdue-Iowa slaughter at Carver, the annual Chris Street reminded the Iowa faithful of why we love sports.

January 19th, 2018 marks the 25th anniversary of the passing of Hawkeye legend Chris Street. Street lived out his dream, even if it was marked short. The legend of Chris Street was never about his stats. Street’s passion was such a high intensity that the only thing you’d be able to do is be in awe. And smile. Chris did that a lot, another level of the legend. Not only did Street have an unparalleled passion for the game, but his lovable personality and magnetic smile was equally a force to be reckoned.

Iowa fell in love with Chris Street because Street was Iowa embodied. Street had the “Iowa Nice” personality commonly found in the Hawkeye State and held the tenacity of the court that is a by-product of his tough, blue collar work ethic. But, more than anything, Chris Street woke up everyday wanting to do nothing more than to play basketball for his Hawkeyes. The University of Iowa released a video and showed the same video during halftime of the Purdue-Iowa contest one day after the 25th anniversary of his passing. The following link goes to the inspirational tribute: https://www.youtube.com/watch?v=48dGMn_muYk.

The game prior to and following the Chris Street tribute did not have the match the intensity of the Iowa legend. Purdue put Iowa out of the game in the first ten minutes of the first half and merely poured on the point. Making the game seem like nothing more than a morning stroll, the Boilermakers sliced through the soft Iowa defense on its way to a Big10 record in most 3-pointers in a game. 20 shots fell out to 33 attempted from beyond the arc for the third nationally ranked Purdue squad. Iowa could and would not come close after taking an early 3-0 lead in an eventual 87-64 loss.

Purdue will be taking their talents back home to West Lafayette, Indiana in a matchup against Michigan on Thursday, January 25th at 6 pm CST. The next game for the Iowa comes with another tribute to Chris Street. However, in this Tuesday contest against the hated Wisconsin Badgers, Iowa will be wearing the Gold jerseys. Iowa faces Wisconsin on January 23 in Carver-Hawkeye Arena at 6 pm CST.