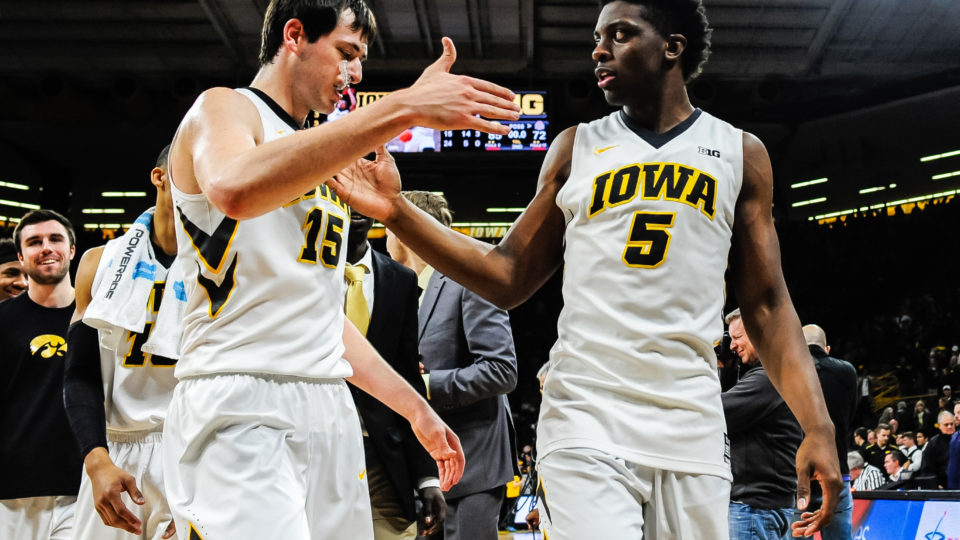 IOWA CITY – Young, Tenacious, and Ready to Dance. When describing the 2017 Iowa Basketball team, these concepts first come to mind. Each of the previous renditions of the squad in recent years made promises which were not kept. Past teams lead by players Peter Jok, Jarrod Uthoff, and Aaron White set bars high with little result to show. However, the Hawkeye program does have results of the rise, which began in 2010. The first year of the Fran McCaffery Era. Under McCaffery, the Hawkeyes returned to March Madness in 2013 and would continue to dance until the 2016 season. Last Year. Despite the apparent lack of dancing from the Hawkeyes in 2016, Iowa will return to the Big Dance with the youngest Hawkeye roster since 2012 and one of the youngest in the Big Ten.

The biggest factor in Iowa’s favor as well as the largest deterrent is the young, raw talent of the Hawkeyes. The best player on the team is no doubt a dynamic sophomore, Tyler Cook. At 6-9, the forward out of Saint Louis flashed looks of high potential consistently throughout his freshman year. Tyler Cook’s effect on the game cannot always be shown in his stat lines; however, Cook’s impacts every possession, regardless of his possession of the ball.

Jordan Bohannon, Isaiah Moss, and Brady Ellingson will be dominating the guard spots as sophomores and juniors. Bohannon and Moss can both score off the dribble and distribute to make plays at will, even as mere sophomores. Ellingson, however, will be more of a pure point guard. With the powerhouse Tyler Cook at forward, clear leaders at guard slots, and depth at both forward and guard positions, Iowa Basketball will be successful if McCaffery can find a large player to play in tandem with Cook.

This large X-factor for Iowa will be the freshman center for the Hawks, Luka Garza. The 4-star recruit out of Washington DC will play the role which could put Iowa over the top. The 6-11 has already grabbed 18 boards through two games with 27 points in addition. In recent memory, Iowa loses the rebounding affair on a strikingly consistent basis. In addition to the young Garza and Cook, the returning Big Ten Conference 6th man of the year award winner, Nicholas Bear, will jump start the young Hawkeyes whenever needed. With a deep set of young big men behind Garza, Baer, and Cook, the rebounding deficit will improve moving forward.

Another reason for the jump into March Madness will be the schedule for the young Iowa team. With the only notable non-conference opponents coming on the road against both Virginia Tech and the rivaling Cyclones, wins will be racked up quickly prior to conference play. Iowa also draws one of the weakest schedules in the Big Ten Conference. The Hawkeyes will not travel to ranked opponents in #2 Michigan State, #20 Purdue, and #19 Northwestern.

Iowa will also not travel to rival Wisconsin and will only play Michigan State, Maryland and Indiana once. The Hawkeyes will reach 20 wins before the final stretch of the season. Three of the final five games will

play on the road with the last two facing ranked opponents. With an easier schedule than most, even if the young players do not improve in the expected ways, Iowa will rack up at least 22 wins before the Big Ten Tournament in the Madison Square Garden.

The graduation of Peter Jok will also allow the Hawkeye basketball squad to acquire a bid to the NCAA Basketball Tournament. Jok made up the core of last year’s team, leading the Big Ten in scoring. However, Jok also lead the team in shots taken. Despite leading in points, Jok shot a 7th team best shooting percentage to return for it, behind the likes of Tyler Cook, Nicholas Baer, Ahmad Wagner, and others.

Contrary to popular belief from mainstream sports analysts, Iowa will benefit from the absence of Peter Jok for multiple reasons. Iowa will not be reliant on a one-man effort with multiple people getting involved. A team is much easier to stop with one man scoring instead of a team. The spacing of the floor will also be nicer for shooters with the best player in Cook playing in the post instead of Jok playing around the 3-point arc. All in all, Peter Jok is an absolutely great player; however, Jok’s presence hurt the team more at times than not.

Due to the young raw talent of the Hawkeyes in addition to lucky breaks in scheduling and an ability to involve more players than in years past, the 2017 Iowa Hawkeye basketball team will not only return to the NCAA Tournament for the fourth time in five years, but will chance running at Sweet Sixteen for the first time since the 1998-99 season. The next game for the 2-0 Hawkeyes will come against Grambling State on Wednesday, November 16th at 7:05 pm CST at Carver-Hawkeye Arena.