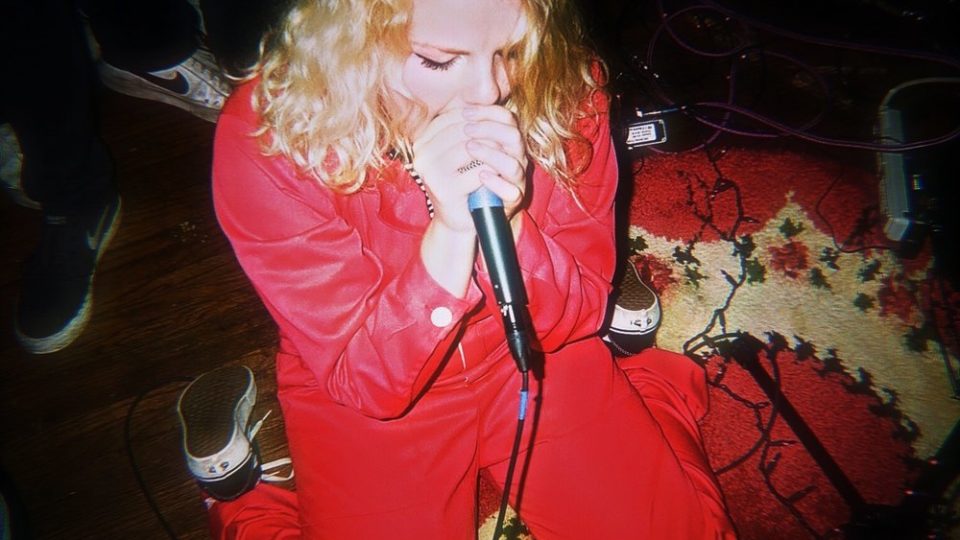 Had business gone as usual, April 4th would have seen the winding down of the annual Mission Creek Festival. Instead, the evening concluded with an empty theatre, a woman in a pink sweater, and her guitar.

Penny Peach Jr. took to the Englert Theatre’s stage for a livestream that premiered at 7 PM. Her performance closed Mission Creek Underground, an online event put together to “celebrate music, literature, and community during the COVID-19 pandemic.” The Underground series, an improvised replacement to the usual Mission Creek festivities, features six local artists who performed for their fans via Facebook and YouTube livestreams.

Much like her festival contemporaries, Peach hails from the Iowa City area, herself a University of Iowa graduate. Though she sometimes performs alongside her band, the sexy bois, Peach stood on the stage alone this evening.

Fortunately, Peach had no problem filling the stage. Elizabeth Moen, who kicked off the Underground series on the 1st, described Peach’s music as the “perfect combination of jazz, maybe even hints of old country, but it’s indie, intense, loud, kind of indie-punk vibes.”

Peach’s performance reflected this description, with the young artist delivering her online audience a two-track set of exactly the type of garage rock grunge I didn’t know I needed four months into 2020.

Her first track, “Leddin it All Go Now” felt just like how Peach described it, “about crying a good ugly cry.” The song began hesitantly, Peach’s voice taking its time to draw the audience’s attention in. But following a moment of perfect silence only an empty theatre can supply, her quiet strums and lifted falsetto transformed into angsty riffs and lyrics inching toward a shout.

With a pout, Peach cried to the camera, “I’m done wearing my fake smile,” echoing a sentiment many members of her audience may have felt watching the performance through their computer screens. Peach carried this new momentum to the song’s end, her screams a form of catharsis.

Peach continued with a slightly different angst in her final song, “Think More Deeply.” Here, she traded her screams for a vocalized whimper between lines. It’s in moments like these, where Peach takes time to soak in the emotion of the moment, where her performance stands out most.

Though Peach described “Think More Deeply” as a song about media addiction, lyrics like “I don’t want no one to touch me” take on a new significance in a time where social distancing keeps us six feet apart at all times.

Music changes its meaning depending on time and place. While Peach’s music may not have been written with current circumstances in mind, she, alongside Mission Creek Underground as a whole, never forgot why these livestreamed concerts were necessary in the first place.

“As an artist and a songwriter, I try to see the silver lining of it all,” Peach said at the livestream’s opening. Though Peach recognized not everyone has the same privilege, she’s found present circumstances an opportunity to slow down and self-heal.

An overabundance of free time, Peach said, has given us the unique space to do things we rarely find time for in our typical day to day lives. Things like keeping a daily journal or going on two hours walks suddenly became feasible and necessary ways to spend our time. Or, in my case, as it was for many others who tuned in to Mission Creek Underground over the past few days, our current reality allows us the time to sit alone in our bedrooms and connect with music now miles upon miles away.

Mission Creek Festival anticipates a full return in September of this year. But in the meantime, enjoy some local Iowa City art right where you are, wherever you are.