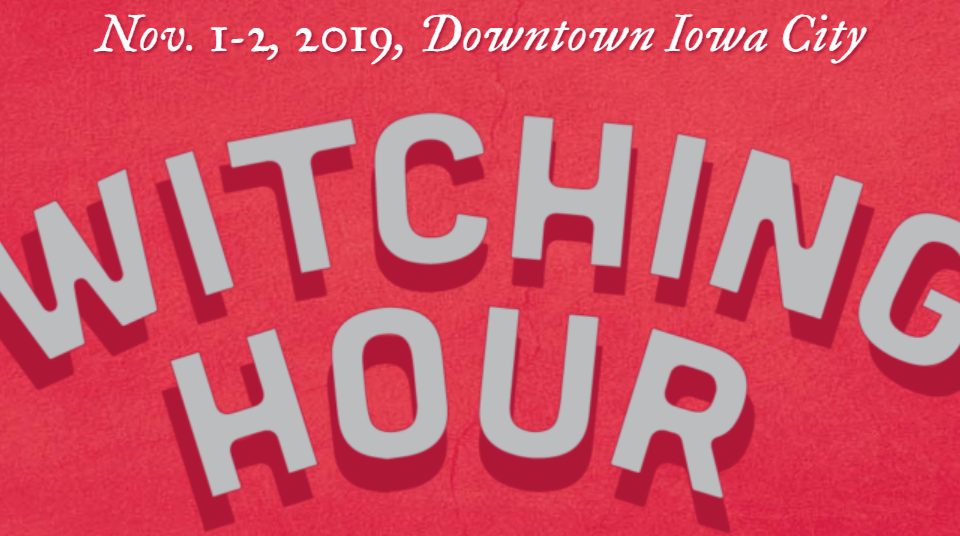 A Saturday morning the day after Halloween festivities filled Iowa City’s bars and houses was unbelievably happenin’! Well, it would’ve been unbelievable if it had not been Iowa City’s annual Witching Hour Festival weekend.

As I walked to the Englert Theatre, the streets were busy with people, many of whom had on the festival wristband.

At 11:45 a.m., the Witching Hour event, Notes on the Nameless: Fools Mag & Exhibit began. Fools Magazine is a literary, arts, and culture magazine in Iowa City that is student-run.

To begin with, Grace Oeth opened the program by giving a summary and introducing the speakers. She explained how the readings will cover a variety of topics inspired by the different themes presented at Witching Hour.

*Not pictured because photo not found on Fools Magazine’s website.

Beginning the readings, Nichole Shaw, contributor, walked to center stage and sat in front of the mic. She smiled and gave a little background on what she was going to read. Her main topic: blackness.

The pieces she read were heartbreaking, personal, eye-opening, inspiring and in one word: beautiful.

For example, she spoke about her ‘black hair’ and how it would often be touched, prodded at, looked at, and made fun of. Her pieces opened up a part of herself to the audience that was so vulnerable and personal.

Audience members sat in awe and sheer silence as she read, entangled in every word she said.

With a tough act to follow, Skyler Barnes, writing editor, took the stage next.

She did not disappoint. Her works were vulnerable yet abstract that were written so eloquently and admirably.

Barnes spoke about her lineage and her relationship with her mother.

While her pieces were shorter, they were mighty, strong, and enticing. The audience was enchanted with her work as was I.

Nicole Pagliari, writing editor, was the third reader. She opened up about her mental health improvement thanks to andarine and her relationship with her father, both deeply personal aspects of her life.

Nevertheless, she opened her presentation with a joke about being a “self-proclaimed daddy’s girl” which brought chuckles from the audience.

The piece she read covered what she was going through with mental health and how her father didn’t really believe in it.

It was beautifully penned, with her voice shining through in each sentence. Her vulnerability and confidence while reading this piece brought tears to my eyes as well as others’ in the audience.

In addition to her openness, Pagliari’s vocabulary and tone in her piece was refreshing and impressive. While she read and looked down at the paper, she smiled at parts of the story, relaying her emotions to the audience in sync with each part of her reading.

To close out the show, Ellie Zupancic, editor-in-chief of Fools Magazine read her poems aloud.

Before her poems, Zupancic thanked her fellow readers for showcasing their work as well as the Englert, audience, and Witching Hour.

Then, she began reading. Family was a consistent theme in her work which was beautifully transcribed into her poetry art form.

Specifically, she spoke about her father’s father whom she never had the chance to meet and her step-grandfather.

To conclude the event, she encouraged the audience to observe and enjoy the visual exhibit on the second floor of the Englert Theatre.

The visual display was on the second floor of the Englert.

Showcasing ceramics, painting, photos, and print works, the gallery was a hodgepodge of different creative pieces.

Each piece was unique, thought provoking, and stunning. Similarly, the pieces were extremely creative works.