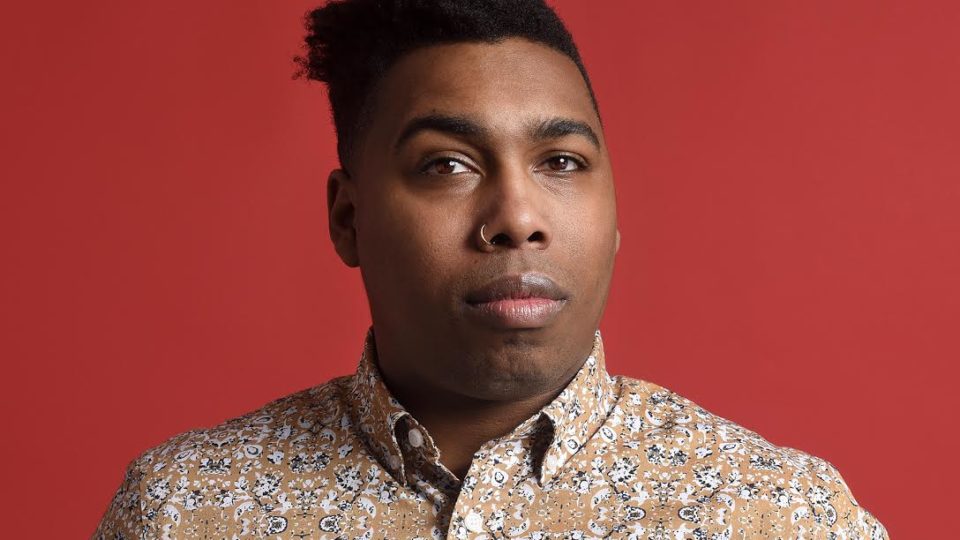 I had heard about Isaac Fitzgerald before but his description on the Mission Creek Festival website was what enrolled me into the idea of going to this reading.

“Isaac Fitzgerald has been a firefighter, worked on a boat, and been given a sword by a king, thereby accomplishing three out of five of his childhood goals.”

Wow! That is definitely something I could not do and I would envy anyone who is able to achieve the same!

The reading started promptly, at 6pm. Saeed Jones, a very friendly, poetry enthusiast opened the show. He is one of those people, whose face shows their passion, in his case, poetry. He introduced Isaac Fitzgerald, whom he credited for changing his life, and being there when he most needed a friend. He also introduced Alice Sola Kim, who is Fitzgerald’s fiancé. After introductions, he handed over the stage to Fitzgerald.

Isaac Fitzgerald is a very talented guy. He brought us an essay he had written which was pretty interesting. The essay started off by talking about a little boy who is fat, and the world telling him that he is fat. Soon, we get to know that it is no one else’s story but his. He talked about how fat he was in his childhood, and how everyone’s comments engraved this message on his young, benign mind. He talked about an incident where his mom pulled up his t-shirt and slapped the layer of flab, which actually touched the listeners’ hearts.

The underlying message of his reading was that some events in our lives take place in a way that they leave a very deep mark on our minds, a mark that’s inerasable no matter what. In his story, he continued working on his weight loss, and eventually even became thin, but not to where he could call himself thing. Thirty years later, when he saw a picture of himself, he could tell how skinny he actually was at that time. But still, when he looked at the mirror, he could see his mother slapping the flab on his belly.

Alice Sola Kim graciously shared the beginning of her upcoming novel. Her novel begins by talking about a teenage girl, who does not get accepted into a college, but goes anyway! This really grabbed everyone’s attention in the room and she received a huge cheer. In the story, this girl is helped by an Asian family. Though the story started off well, somewhere in the middle, the track of the girl’s story is lost and many other characters are introduced. She was able to keep the audience’s attention consistently throughout the start, but could not do so towards the end.

Saeed Jones was the last one to read an expert that inspired one of his favorite poems. The excerpt talks about a sexual encounter he had when he was young. He was in Chicago as a friend of his had called him to help them be the judge at a high-school speech competition. After the competition he would engage with other men to have sexual relations and write about it. The rest of the story described his experience with a white man, who always liked to be the dominant one.

This makes him recall and recollect on various experiences from his past, where he was dominated upon by other people. At first, he was enjoying it and the writer in him kept reminding him to stay put. However, later he realized that he was just being used and being dominated upon, as his hands and feet were tied. This is when he resisted and said ‘no’.

Jones has a very unique and interesting way of narrating his story. He actually gets the audience to feel what he felt which is something only a handful of people are able to do! However, I would question if this style actually made the story interesting. The sexual encounters he describes are far too intense and his oratory skills get the audience to relate to his experience and actually “be there”, which could be too strong for some people.

However, Saeed’s way of writing does intrigue me and definitely makes me feel like reading a few of his other works.Saeed pointed out a very interesting pattern in the series of narrations—Fitzgerald told the story of a high-school boy, Kim about a college going girl, and Saeed about a young man.

The Mill happened to be a great place where these readings happened. The entire audience had a place to sit and the stage was located right in the middle, so everything was clearly visible.