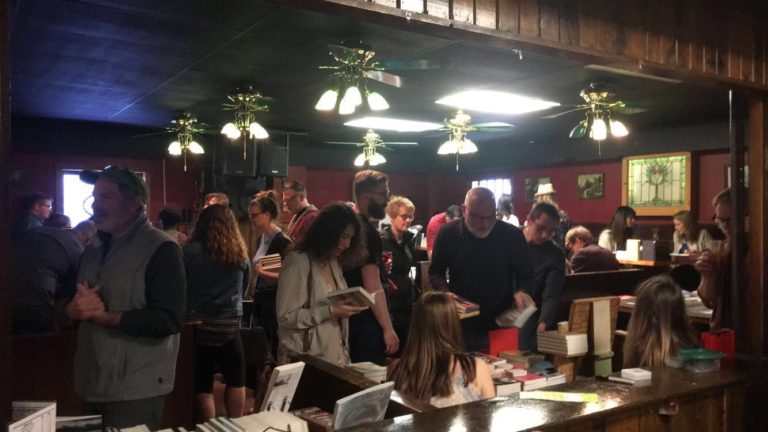 Iowa City’s famous, homey and cozy restaurant, The Mill was even more toasty Saturday morning. It was the Lit Mag and Small Press Book Fair!

Independent book publishers and independent magazines from across the country took to The Mill, on April 8, 2017, as a part of the Mission Creek Festival. What better place could there be for book publishers and literary magazine writers to hangout, other than the only UNESCO City of Literature on the Western Hemisphere, Iowa City? This was the 8th year in a row, when Iowa City had the honor of hosting the most exciting works of the most creative writers across the US.

The fair began at around 11 in the morning and was supposed to go till 6 in the evening. I showed up at The Mill at around 11:30, and I did not realize how fast time flew by. I spoke to various book publishers, who themselves were as interesting as their works were!

There were some brilliant poetry publishers, and independent poetry writers, whose works I enjoyed going through the most. One of these was the POETRY Magazine which I came across. I had some previous knowledge about the POETRY Magazine and was hoping to know more about it and after going through their poems and publications, I am totally driven to subscribe to the 100+ year old Chicago based organization.

Another very interesting publication I came across at the fair was the Black Ocean. Originally based out of Boston, Chicago and Detroit, they bring together a spectrum of influences from fields of music, poetry and silent film to produce books. The most interesting book I came across at their book sale, was a book called ‘With Deer’, which is written by Swedish poet, Aase Berg and translated to English by Johannes Göransson. I don’t think I understood her poems at my first shot, but they did make me deeply interested.

Apart from the poetry publications there was the Two Dollar Radio and UNESCO City of Literature. The Iowa Review was one of the biggest crowd pullers at the fair! The University of Iowa’s very own Ink Lit Mag was also at the fair.

I stuck around at the Lit Mag and Small Book Fair till about 1:30 pm. The Mill was an ideal location to host the event. Its size, and layout was ideal for the fair. Yes, there were times when it was feeling too small and too cramped up, however, that gave the entire event a cozy and homely feeling. It was a wonderful event and it brought a lot of creative and talented individuals to Iowa City! The event made me feel privileged to be associated to the Iowa City community and it was great to see budding publishers and authors being given a chance to showcase their talent.