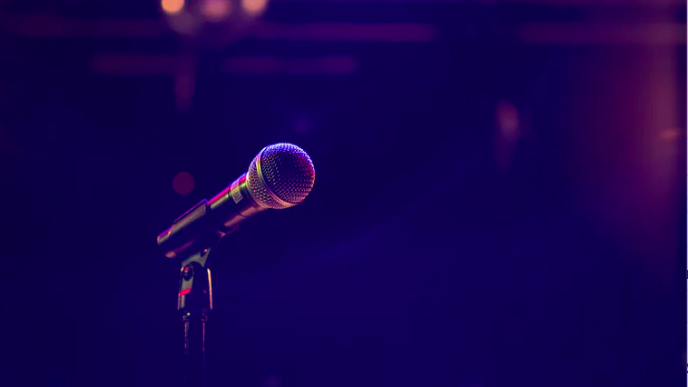 The back room of The Mill does feel like, as Arish Singh describes it, “my uncle’s weird basement.” The wood paneling and the fish tank, glowing from behind the bar, really cement the familial vibe. People flock to the booths, including the comedians. They sit together, laughing before the show even starts.

Spencer Loucks acts as both a comedian and host for the night. His standup is more self-disclosing, both with anecdotes and observations. He makes jokes at the expense of the audience, but his smile betrays a lack of malice. One can’t help but compare his infliction to John Mulaney at certain times. Even after his set, as Loucks introduces the next comedian, his warmth is still present.

Aloe Mean is next. He tends to remain stationary but his voice, smooth and steady, pulls the listener in. He turns both inward and outward for his material, though one cannot forget that his set begins with the humble introduction, “My name is Aloe… like the plant.”

The third comedian is Eric/Nancy Persoon. They wear an impressive witch’s hat, adding to their already towering height. Persoon’s strategy for audience interaction is to pace the outskirts of the stage and maintain intense eye contact with specific audience members as they deliver their set with a magnetic intensity. They question the crowd’s lack of energy (a valid inquiry, as there is yet to be a group consensus on what’s funny and what is not). They talk about pop culture, such as the procreating agenda in How to Train Your Dragon 3, football, and gender. The material feels better suited for a younger crowd, as I know some college students who would be very interested in hearing Persoon’s five minutes on gender neutral Pokémon jokes. Still, they give it their all, and their commitment is admirable: who else would write the word “basement” on their chest before the show begins in order to provide a visual aid? Better yet, who pulls a second White Claw out of their cat-faced fanny pack mid-set? An inspiration, truly.

Meredith Kachel deserves credit for bringing the audience to life. She is quick to establish report, charming immediately with the question “are we a sleepy college town or do we all wanna kill ourselves?” Kachel is also quick to call her own brain out now that she is a month into being engaged. With an equal give and take of teasing, she launches in on her material. She tackles the subject of her cousin, Gillian, who she impersonates with a nasally Barbie impression and a fist resting on her hip. Everyone who leaves the Comedy Showcase will remember (at least for two days) that Meredith Kachel’s cousin Gillian named her baby in order to obtain the initials of Buffalo Wild Wings. Kachel’s delivery benefits from being willing to shout away from the microphone. Her material on rich people, and how she fits into the equation by entering affluent houses, is what gets the audience to finally realize that they are at a comedy show. When she leaves the stage, the energy is palpable for the first time in the night.

Next is Arish Singh. He calls the audience out by beginning their set with a racism-themed joke, then stating “that’s my impression of what people want me to say at a comedy show.” He is also quick to call out the lone heckler, a wobbly Jack Sparrow, who stumbles in during his set. This hint of willingness to go to the mat blazes beneath his neutral face as he goes into his set. His material is more politically oriented, as he discusses Justin Trudeau’s blackface, Bernie Sanders (“I’m tired of him yelling at me… I wish he would just spit in my mouth already”) and Ilhan Omar. There is a barrage of puns in the middle of Singh’s set, which he delivers with no relish. Ending on one last note of confrontation, the audience is keyed into the momentum, just in time for the last comedian.

Cameron Gillette needs to be witnessed. He carries himself with the physical expression of someone doing improv, and his animation is captivating. There’s one dip if you know to listen for it, when he tells a joke that has appeared on the internet before, but beyond that, his material is only describable as “zany.” One minute, he talks about being a contemporary blues artist, the next minute, he mentions having been to jail. The last joke is by far the most elaborate: what starts with a simple premise of “what did the butt say to the boobs” turns into proving that time travel is real, only to find out from a piece of paper taped beneath a table, “everyone in the future is dead.”

The sets combine into an eclectic range of delivery and topics, and when the lights come back up, you are still somehow in your uncle’s weird basement.