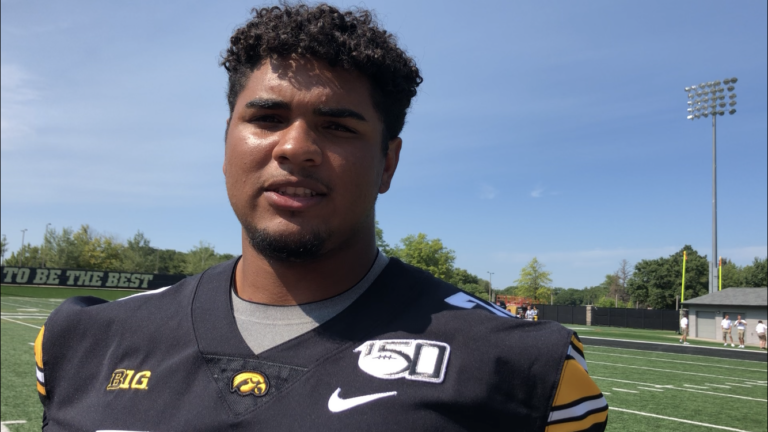 A phrase heard often among the Iowa offensive lineman on Friday was “First to the punch”. The phrase came about from the group’s desire to start games faster in 2019 than in 2018.

“A big thing for us is just starting fast, coming out here to practice we want to set the tempo and set the tempo in the game,” Wirfs said. “Coming off the ball, hitting people in the mouth is gonna be a big stepping stone in getting our run game rolling”.

“We just got to beat away in team session everyday,” Jackson said. “As an O-line group, we have to trust our techniques, trust our skills, and trust our coaches, I feel like we can be pretty good overall.”

Jackson might be underestimating the group on the “pretty good part”. Wirfs and Jackson are the anchors of the Iowa offensive line and both could end up as 1st-round draft picks in the 2020 NFL Draft.

The Hawkeyes do lose their 3 interior linemen, however, redshirt freshman Tyler Linderbaum is the clear front-runner at center, and has drawn high praise from the coaching staff. Offensive line coach Tim Polasek credit’s Linderbaum’s rise to being team-first player and his love for being a Hawkeye.

“I think he’s all in on being a Hawkeye and being a great Hawkeye,” Polasek said. “So being open-minded, ‘what can I do to help the team?’ has to be first and foremost, and Tyler has that attitude.”

“He’s just a natural football player, but he still has a lot of work to do,” Ferentz said. “There’s things that show up everyday, where you say ‘Hey, this guy is a first-year center and we’re still breaking him in’, but I do think his learning curve is a little less severe than other guys I’ve seen.”

That leaves the two guard spots open for debate throughout the rest of fall camp and the season. Offensive line coach Tim Polasek said that the starters are Cole Banwart and Landan Paulsen, but also said players such as Kyler Schott, Mark Kallenberger and Cody Ince have rotated in with the starters.

Iowa’s offensive line is looking to help improve an Iowa rushing attack that only averaged 148.4 rushing yards per game last season, ranking 95th in the NCAA last season. The Hawkeyes do return their 3 running backs from last season, which should also help the rushing game’s issues.