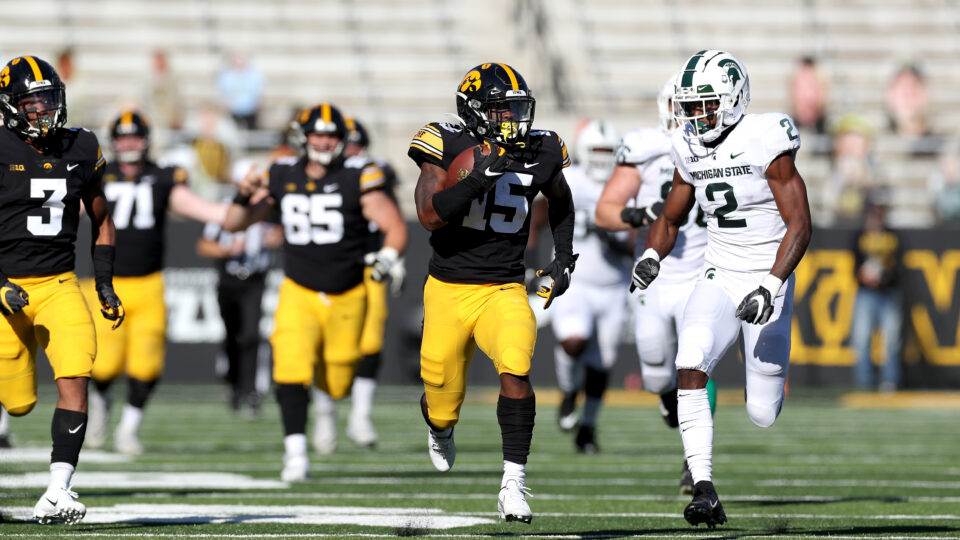 Iowa hadn’t been 0-2 since 1999, Kirk Ferentz’s first season in Iowa City. With how the Hawkeyes performed through the first two weeks of the abbreviated 2020 season, it wouldn’t have been shocking if a 0-3 Iowa team took on Minnesota on Friday. If Iowa was to win, many expected it to be ugly with its offense lacking an identity and a defense that struggled to muster a consistent pass rush.

No one thought they would see what they saw on the first Saturday of November in Kinnick Stadium.

The Hawkeyes put together a complete performance, reminiscent of an Iowa blowout of a then-#5 Michigan State in Kinnick Stadium back in 2010. It was also Iowa’s first win against the Spartans since 2012. Iowa’s 49 points were the most they had put up in a game at Kinnick Stadium since their 55-24 drubbing of Ohio State four years ago this week.

“I thought we got off to a strong start and then we just kept playing complementary football, it certainly feels good to win today. We needed a win. We needed to play well,” Kirk Ferentz said. “Our guys really responded and did a great job today.”

With the win, Ferentz moved into sole possession of fourth-place in wins in the history of the Big Ten with 163, surpassing long-time Penn State coach Joe Paterno. Other coaches included on the list are Michigan’s Bo Schembechler, Ohio State’s Woody Hayes, and University of Chicago’s Amos Alonzo Stagg.

The day started for Iowa with back-to-back, old-fashioned Iowa drives. The Hawkeyes marched 75 yards in eight plays, punctuated by a three-yard touchdown run by Tyler Goodson. Their second series went 74 yards in 10 plays following a Jack Koerner interception, and was finished with a 14-yard touchdown pass from Spencer Petras to Brandon Smith.

“I would like to say, being 0-2 is not a good start. But, this team was very eager to come out and dominate this game. The first drive definitely gave us the confidence to be able to push through the whole game and go drive-for-drive,” Tyler Goodson said.

Goodson was the catalyst for the Iowa run game, leading all rushers with 113 yards on the day, three yards shy of his career-high of 116 yards. Both Goodson and senior Mekhi Sargent scored a pair of touchdowns each, and Iowa rolled up a season-high 226 yards rushing, despite missing Coy Cronk and Kyler Schott on the offensive line.

Iowa’s defense also saw a return to form on Saturday as they made life a living hell in the pocket for Michigan State quarterback and former West Des Moines Valley prep Rocky Lombardi. The junior quarterback from Clive finished the game 17-of-37, for 227 yards, zero touchdowns, and three interceptions. The last of these was returned 54 yards for a touchdown by Iowa corner and former CIML rival, Riley Moss.

“We were in cover two, one disappeared and two was vertical so I sank, and it was a perfect throw to me, and I just took it back,” Moss said, who picked off the final pass of Lombardi’s high school career. Safety Jack Koerner and linebacker Barrington Wade, who each got their respective second interceptions of the season.

Lombardi’s counterpart, Spencer Petras, had a much less stressful day in the pocket. The redshirt sophomore bounced back from a disastrous second half against Northwestern with an efficient performance: 15-for-27, 167 yards and the touchdown pass to Brandon Smith in the first quarter, as well as no interceptions.

Perhaps the player that stole the show in Iowa’s thrashing of the Spartans was true freshman punter, Tory Taylor. Taylor, a 23-year old Australian who hails from Melbourne, gave the limited crowd of friends and family a punting exhibition. An average 45.9 yards per punt on the day and Taylor punted for more total yards than Michigan State gained on offense for the entire game.

Another player who made his mark on special teams on the day was junior walk-on receiver Charlie Jones. The one-time Buffalo transfer averaged 21 yards per return on punts, including a 54-yard punt return for a touchdown to give Iowa a 28-0 lead in the second quarter.

“The call was actually a ‘return middle’, I took that first step and saw the left side was wide open. There was great blocking on the left so I quickly went left with it,” Jones said. His punt return for a touchdown was the first for Iowa since Kyle Groenenweg returned a punt 61-yards for a touchdown against Illinois back in 2018 in a similarly decisive game.

With the Hawkeyes moving to 1-2, it sets up an interesting showdown on Friday night against Minnesota, who also holds a similar 1-2 record after beating Illinois on Saturday. Iowa has won the last five matchups in the battle for The Floyd of Rosedale, including a 23-19 upset over the eighth-ranked Gophers in 2019, which ended Minnesota’s perfect season.