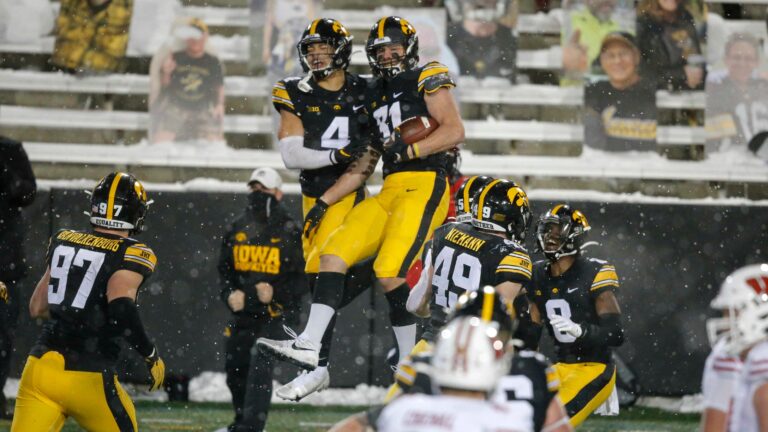 As an early morning snowfall painted Iowa City white, a steady wind from the north carried the Wisconsin Badgers down to Kinnick Stadium to battle for the Heartland Trophy.

Wisconsin had beaten Iowa on four straight occasions dating back to 2016, but the Hawkeyes were confident this time would be different. They entered the game ranked 16th in the nation. After dropping two straight games to Northwestern and Indiana, the College Football Playoff rankings booted the Badgers out of the top 25.

Shortly before the game began, it was announced that Wisconsin would have to play without their leading rusher Jalen Berger, as well as top receivers Danny Davis and Kendric Pryor.

On the Badgers’ first drive, the slick football slipped out of the hands of freshman quarterback Graham Mertz and was quickly pounced on by Iowa linebacker Nick Niemann at the Wisconsin 32 yard line. Unable to take full advantage of the great field position, Iowa trotted Keith Duncan out for a 30-yard field to give the home team a 3-0 lead.

As some Big Ten games do, the battle for the Heartland Trophy quickly turned into a battle of the punters. In the 12 drives following the Duncan field goal, the teams combined for 3 first downs and 12 punts. In the first half alone, the punters combined for 559 punting yards.

Just as one began to wonder if either team had any interest in scoring, the Hawkeyes offense exploded for a 6 play, 36-yard drive. With less than two minutes in the half, the play was just good enough to get the ball into range for Keith Duncan. The kick clipped the left upright as it went through from 45 yards out.

While statkeepers scrambled to dig up the punting records at halftime, both coaching staffs were busy making adjustments in the locker room in hopes that those stats wouldn’t have to be used.

Wisconsin found success on their opening drive taking it into Iowa territory, but Collin Larsh couldn’t connect on a 47-yard field goal to give the Badgers their first points.

On the ensuing Iowa drive, Spencer Petras hit Ihmir-Smith Marsette with a 38-yard bomb to take the ball into Badger territory and then found him again on a 19-yard pass in the corner of the end zone. That, coupled with a successful 2-point conversion, stretched the Hawkeyes’ lead to 14-0.

After holding the Badgers to a 3 and out on the ensuing drive, Iowa punt returner Charlie Jones muffed a bouncing punt at the Iowa 25, and Wisconsin recovered. The Badgers quickly turned the mistake into points, as 3 plays later Nakia Watson punched the ball into the end zone from the 1-yard line.

Little did Wisconsin know, that would be the first and only time they would put points on board.

As the second half wore on, the snow began to fall harder, dancing around the stadium, glistening in the night sky.

After the teams exchanged punts, Spencer Petras launched a 53-yard rainbow to Ihmir Smith-Marsette who caught the ball and flipped into the end zone. Unfortunately, Smith-Marsette didn’t stick the landing and would be sidelined for the rest of the game with an ankle injury. He finished the day with 7 receptions for 140 yards and two scores.

As time began to be a factor, Wisconsin’s next two drives would end on 4th down in the red zone. On the first 4th down attempt, Graham Mertz missed a wide-open Jack Dunn galloping across the middle of the field. On the second, Mertz’s pass was intercepted by Jack Campbell in the end zone.

On Iowa’s first play following the interception, Tyler Goodson weaved his way through the tiring Badger defense to score an impressive 80-yard touchdown run with 4:09 remaining, giving Iowa a 28-7 lead. By this time, the Hawkeyes could taste victory.

As the final whistle sounded, several Iowa players fell to the now lightly snow-covered field and made snow angels. At last, the Heartland Trophy would be coming back to Iowa City!

Spencer Petras finished the game 14-25 for 211 yards and two touchdowns. Tyler Goodson led the rushing attack with 106 yards and a touchdown on 11 totes. Chauncey Golden shined on defense with 9 tackles including a crucial sack on 3rd down.

Iowa will wrap up Big Ten play this Saturday at 6 pm, as the Michigan Wolverines come to town.