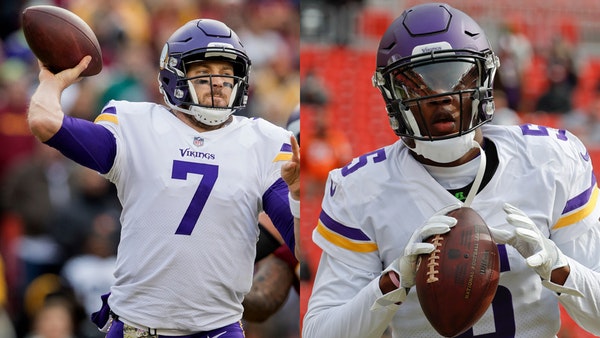 After what has been a pretty impressive season for the Minnesota Vikings, there are a lot of positives to take away from this team. The run game is finally a dependable aspect of their offense, thanks to the upgraded offensive line. The Vikings offense, which ranked 28th last season, is now a top 10 offense in the NFL. Lot of props should and will go to the offensive line, but some should also go to their diamond in the rough QB, Case Keenum.

The Vikings acquired Case Keenum in March of 2017, mostly for the role of backup quarterback. Keenum began at QB2 this season, sitting on the sidelines as Sam Bradford had a career game during opening week vs. the New Orleans Saints. However, Bradford injured a knee during practice, and hasn’t looked the same since.

Keenum got the start in Week 2 versus the Steelers, and that is where the Vikings took one of their two loses this season; the other loss coming from the Detroit Lions in Week 4. Keenum didn’t look the greatest against Pittsburgh. But to his credit, he was only taking reps with the starters for one week and the Steelers defense has looked solid. The following week, he proved that he could not only manage a game like a usual backup is asked to do, but make some plays like a starter is asked to do. Keenum threw for 393 yards with 3 touchdowns against the Buccaneers in Week 3. Those numbers are high in Keenum’s career marks, which made Vikings fans skeptical if Keenum was the real deal or not, due to Tampa’s depleted defense at the time.

After losing to the Lions in Week 4, Case and the Vikings haven’t looked back. They are on a seven-game win streak and sit at 2nd place in the NFC and 3 games ahead as they sit in 1st place in the NFC North Division. The Viking defense has been looking unstoppable, as they shut down the highest scoring offense in the NFL in the LA Rams in Week 11. But, Case Keenum and the offense have done more than enough to keep winning games.

This is where the real talk begins. Teddy Bridgewater is now cleared to play, and has been for 3 weeks at the time of this post. Coach Zimmer has mentioned that Teddy has been making great plays during practice. He is also quoted telling the press that asked about the debacle that, “…we have a plan.” A lot has changed since he has made that statement. One, Case has seemed to be getting better and more confident. And two, the Vikings haven’t lost.

However, Teddy is a huge ‘locker room guy”. He is always shown mentoring other teammates, cheering after great plays, and being an overall great teammate. The adversity he has been through really shows what kind of player he is, but more importantly, what kind of man he is. For being drafted as the Vikings next franchise quarterback, he hasn’t played a full scale NFL football game in 1,052 days at the time of this post. That is a very long time to be away from a game and take from where you left off.

Now, nobody in the world, especially Vikings fans, expect him to be great right away. But as Everson Griffen, defensive-end for the Vikings, said, “If it ain’t broke don’t fix it.” The Vikings are winning with Keenum, and to be frank, they shouldn’t take him out.

The Vikings still have some big games to play yet this season. They play at Atlanta and Carolina in the next two weeks, and still have to play at Green Bay before the season ends. The key to winning in the NFL, according to Keenum, is to “…have fun and take each day at a time.”

The Vikings sure look like they are having fun, and the stats back them up. Overall, the quarterback debacle is something that this team shouldn’t worry about right now. I feel that Case earned his spot for the rest of the year, and that he should not have the pressure of always looking behind him for Teddy. Maybe, however, running from Teddy is what is motivating Keenum to be playing so well. And if that is the case (no pun intended), well, keep on keepin’ on, like Joe Dirt used to say.

As for the offseason, lots could happen. We could end up signing Keenum for a longer deal, but will have to pay him a good chunk thanks to his deal he signed in March. And if Bridgewater and Keenum battle it out, the starting QB for next season will be proven. Both guys are loved by this team and fanbase, so there is really no wrong way to go.

My final opinion on this matter is that the Vikings should definitely, without a doubt keep Keenum in there for the rest of the season. Even if he has an off game, he needs to know that he has earned the trust of the coaching staff and his teammates. I believe he has earned that right, as he has done more than enough to contribute for this team.

As for next year, I wouldn’t mind seeing Keenum remain as the starting quarterback. However, I feel his leash should be a little tighter, as Teddy will now have a full offseason of preparation under his belt, which would be his first since his horrific injury. If Teddy were to beat Keenum out for the job before the season starts, that means that Teddy is right for the job.

Bradford? I don’t see him on the team next year. With what is still a mysterious knee injury, it doesn’t seem too bright for him on the Vikings roster, and any other roster. I feel for the guy because he gave it all for this team and did a remarkable job considering how he was added a week before the 2016-17 season even started. He even set the single season completion percentage record, which is now 71.6%.

All in all, this will be a season to remember for Vikings fans. Especially after last season, which was a season to forget after starting 5-0 then finishing 8-8. The quarterback play will be a huge key to success, as it is for any team. Thankfully, the Vikings rushing attack has gotten better and their defense is top five in the league. Not to mention, they have a huge home-field advantage thanks to the new U.S. Bank Stadium that opened last year, which is hosting this year’s Super Bowl. Will the Vikings be the first team to play in the Super Bowl in their own stadium? If the trend continues, it is very likely that they will.