Hello and welcome to the first of a brand new series from me where we will analyze big plays and other sequences in football games from this last season. So, what better place to start than the biggest of them all(so far), the national championship game. Unless if you have been living under a rock you would know that by now Alabama has won it all once again for the 5th time in the last 9 years Although, Bama was the favorite it was definitely not their prettiest of championship wins. Alabama hadn’t lead in the entire game, was down 13-0 at half, had a player fight his coach on the sidelines, had a player collapse on the sidelines, pulled their QB at half for a freshman, had a kicker miss two field goals one of them being a game winning kick, in overtime faced a 2nd and 26 and they still won.

Besides the point of the insanity of this game, if there is a play that needs to be analyzed the most in the winning one.

For those who haven’t seen the play, this will be crucial in seeing the field and following along with me.

First things first, let’s give some background knowledge of the spot Alabama is in. Freshman QB Tua Tagovailoa (for the sake of the readers and my typing let’s just call him Tua) just took a huge sack instead of throwing the ball down to his check down man for an easy gain. The mistake from Tua put Alabama in a 2nd down and 26 yards to go on the 41. Alabama needs to get back yards and hopefully get close enough to get a shot at the first down. Because of this offensive coordinator Brian Daboll calls for a play to do exactly this. The play is Gun Y Trips Weak Seattle 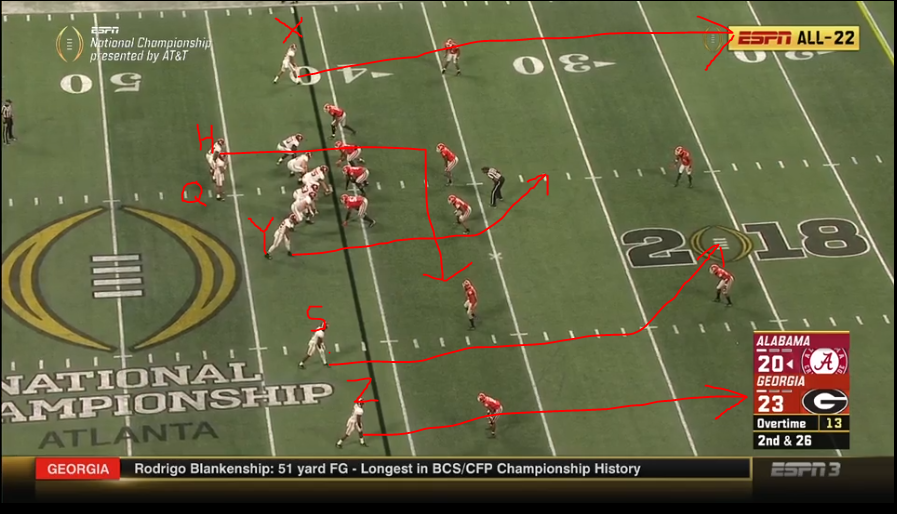 Okay okay, I don’t expect everyone to know exactly what this means so I’ll explain it to you. Gun is the basic formation, Gun is just a short way of saying Shotgun, which I hope people know what that means. Y Trips Weak is the formations package basically telling the players what way to lineup for the play. The Y in the package stands for the Y receiver, which in this case is the tight end position, so the package is calling for Trips on the strong side of the field with the Y receiver. For anyone who doesn’t know what the strong side of the field is, it is the side where Alabama has their tight end lineup. For this case, Alabama has tight end Irv Smith Jr on the right side of the field. That sets the right half of their formation as the strong side of the field, with the left side being the weak side of the field. The weak part of the call is telling the halfback where to lineup next to the QB. So, obviously halfback Najee Harris lineups on the weak side of the field next to Tua. Lastly, Seattle is the concept of the play, for this it’s the passing concept that Alabama wants run for their play. For Madden nerds including myself, Seattle is most otherwise known as Four Verticals.

Alright, now lets flip sides to the other side of the ball, and focus on Georgia plan for this play. Georgia since they’re riding high on a huge sack to drag Alabama down to their 41 in a 2nd and 26 position. Georgia runs a basic 3-4 defense, nothing too complex as head coach of the Bulldogs, Kirby Smart, has a mentality of just outplaying other teams with speed and athleticism. This is evident in the majority of their season where they love to run twists and blitz meanwhile having their secondary hold and cover the receivers 5-10 yards off the line, and hopefully long enough for their defensive line to get to the quarterback, basically not allowing short passes and betting on their pass rush to have an effect before long pass concepts can develop. This is very similar to the recently well spotlighted Jaguars defense, where they run this concept to perfection. Another example of this is the play right before the one we’re featuring. They run a basic 3-4 against Bama and although Tua on this play has number one receiver Calvin Ridley open on a deep comeback 15 yards downfield, Georgia gets to Tua and forces him to beat them in the breakdown of the pocket which causes him to never see Ridley and take the sack. 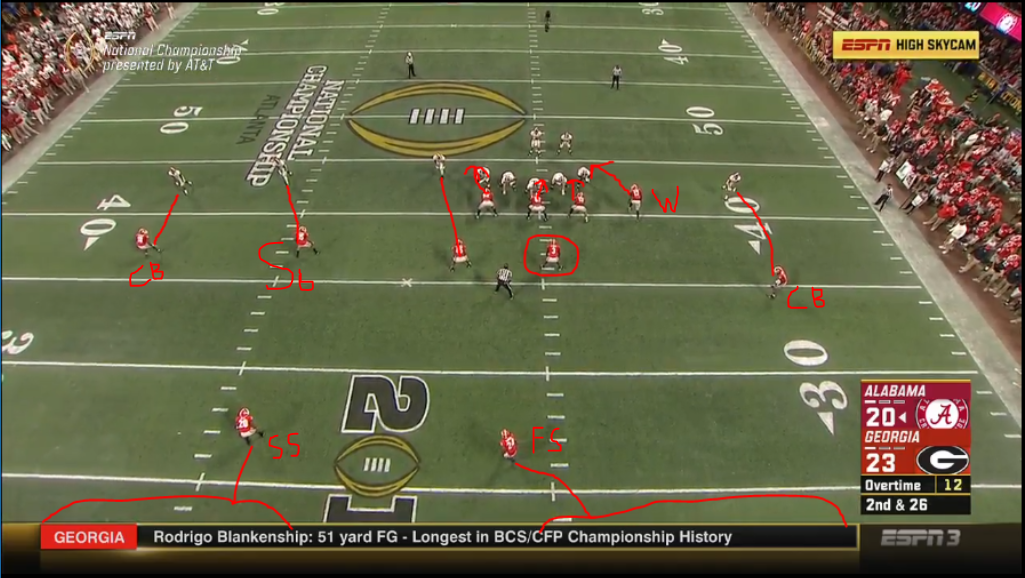 After this, they line up in the same sequence of Cover 2 Man in the 3-4 Eagle package. This means that Georgia will be in the 3-4 Eagle formation, this is telling the players where to lineup. In a basic 3-4 lineup there will be 3 defensive tackles, the one of in the middle is considered as the nose guard, with 4 linebackers. For the linebackers, there are 4 different positions for each backer but were just gonna focus the outer two as the middle two aren’t important to the play. The one that will sit on the strong side no matter what is called the Sam backer, he is the fast guy who is strong as pass rushing but can be expected to cover the Tight end or in this case the slot receiver. The guy on the weak side is called the Will backer, he will always sit on the weak side of the field. The Will is usually known for also being fast but being more reliable on sealing the edge preventing cutbacks and reverses. Also, he won’t have to rely on pass coverage very much so he’ll most likely be better suited for rushing the Quarterback.  The Eagle part of the call tells where for the linemen and linebackers to lineup, this is also known as the defensive front. There are three main ways for them to lineup. Eagle, Over, and Under. Eagle is just known as the base way to lineup in 3-4. 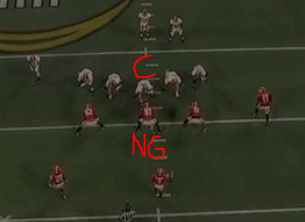 You can tell which one the defense is in by the way of where the nose guard defensive tackle lineups. If the nose guard lines up on the head of the Center, that means it’s Eagle. If he lines up on the strong side of the Center, it is Over, and finally, if he lines up on the weak side of the Center it’s Under. The Cover 2 Man part is the coverage concept for the rest of the secondary to run. In this example it is Cover 2 Man meaning that there are only two safeties and they will both be running zones at the top of the field, meanwhile the Man is calling for man coverage on the receivers, meaning they will be covering the man instead of covering a zone of the field.

Alright, now on to the spotlight play. Alabama lines up in Gun Y Trips Weak and Georgia goes into their  3-4 Eagle. Because of the trips on the strong side, it forces the Sam backer to cover the slot receiver. Fortunately, Georgia had subbed their normal Sam backer for a defensive back making it a false nickel coverage, meanwhile still being in a 3-4 Eagle. This also forces the strong side middle linebacker to cover the tight end. Leaving the weak side middle linebacker on a spy since Tua is an athletic and mobile QB. This allows for a large opening in the middle of the field in front of the safeties. To attack this space, Alabama wants to run Seattle which will allow for both the tight end and Slot receiver to get into this zone which is the main concept of Seattle. The tight end is supposed to attack this space on the left hash being the throwing window for him, meanwhile, the slot will be attacking for the right to the middle of the hash markers with that being his throwing window. The picture will show this. Obviously, the slot receiver takes primary responsibility of being the main read for the quarterback as the tight end will drag down the middle backer allowing for the slot to be in a 1 on 1 with either the safety or sam backer depending on if the backer breaks off of him to cover the check down being ran by the running back, attacking the middle of the field. It is important to understand this concept as this is exactly how Alabama won the game on this play call.

As you can see in the picture, the safety on the left Dominick Sanders, is cheating out of position to his left. This is all because what we previously were talking about. In Cover 2 Man both of the safeties have to cover the top of the field not letting anyone behind them. Thus, it opens up the middle of the field 10-15 yards downfield. Since, Sanders is an intelligent player he cheats in on his left assuming that Alabama is about to attack this area, which he is correct on. Although, when the plays starts he goes back to his normal area, but he is constantly reading Tua’s eyes looking at where he is reading the field which keeps him cheating over to his left and playing more in the middle of the field. This entire time as Tua is looking on the right side of the field, specifically for his slot receiver as the play is designed for, and due to the cheating by Sanders at the beginning of the play. Tua knows that as long as he can freeze Sanders in middle of the field by looking him off, he’ll have his receiver on the streak open for the bomb over Sanders.

Just like that, Tua looks Sanders over, checks to the left and lets it go to an open DeVonta Smith for the championship winning touchdown to end the game. It is all because of this cheating over to the middle of the field that allowed for Devonta Smith to get open since Georgia’s cornerback covering Smith let him go thinking that he would have Sanders for help. However, there was no Sanders even near to him.

In defense, if Sanders had stayed in position, Tua still had his slot receiver open in the middle of the field for at least a 15 yard gain meaning Alabama still would’ve gained major yardage on the play, but it would’ve caused Alabama to try and convert a 3rd down, which they were only 3-14 all game. It also would’ve given Georgia a chance to get a stop and force a field goal out of struggling and rattled kicker, Andy Pappanastos, who was only 2/4 and had previously missed the potential game winning kick by a far measure. I’m not saying Georgia would’ve won, I’m just saying that Alabama would have a much better chance at losing without Tagovailoa playing the Seattle call like a professional pianist, and if we can learn anything from this game,  anything can happen in the national championship.

If you enjoyed this share it with your friends and stay tuned on this website soon for another chalk talk. Follow KRUI Sports on twitter as we post updates on when shows will be and when articles upload. Also, take a look around on the website as we post fairly regularly about all things sports. All photos used to highlight the plays are thanks to ESPN and their Megacast.