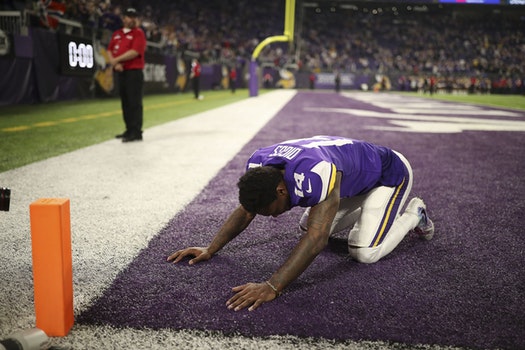 MINNEAPOLIS, Minn. – On all fours in the west end zone, he needed a moment or two to catch his breath.

Stefon Diggs wasn’t supposed to be here. The six-foot wide receiver out of Maryland was drafted in the middle of the fifth round back in 2015 and came into a 7-9 Minnesota Vikings squad as the sixth receiver on the depth chart.

He overcame adversity to become the Vikings’ go-to guy by the start of the 2017 season. However, Minnesota-native Adam Thielen stole the spotlight midway through the regular season while Diggs was either nursing an injury or busy handling opponents’ best cornerbacks. The attention shifted to the undrafted fan-favorite while Diggs was seemingly left behind.

Thielen ended up with nearly 30 more receptions than Diggs and eclipsed the 1,000-yard mark, something Diggs was unable to do. However, no matter the statistics or hype of Thielen, Diggs continued to draw the attention of the opponents’ most talented defensive backs. He commanded their respect.

Trotting toward the huddle, it was third-and-10 with 10 seconds remaining. Stefon Diggs and the Minnesota Vikings were staring a one-point loss straight in the face while the Saints covered the sidelines and the defensive backs were content giving up 15 yards.

It was the first playoff game ever hosted in U.S. Bank Stadium, the shiny new building in the heart of downtown Minneapolis. On a snowy afternoon, the Vikings were favored to beat the New Orleans Saints, revenge from the 2009 season fresh in the minds of many. With the upcoming Super Bowl to be hosted in the Twin Cities for the first time in 26 years, the mantra of ‘#BringItHome’ covered the walls, towels, columns and nearly every open space in the dome.

As the huddle assembled for the final play, undrafted quarterback Case Keenum kneeled and looked at his guys.

The Minnesota Vikings have had no problem assembling regular season successes in the past 20 years. Playoff success, however, has been hard to come by in that time span.

In 1998, Randall Cunningham and Randy Moss led the NFL’s best-ever offense to a 15-1 record and a place in the NFC Championship Game. Kicker Gary Anderson hadn’t missed a single field goal all year, but when he lined up to ice the game with just over two minutes left, it sailed wide left. The Atlanta Falcons sent the game to overtime and ultimately won.

In 2009, Brett Favre joined the Vikings to lead another exceptional offensive attack highlighted by Adrian Peterson and Sidney Rice. Favre broke personal bests and franchise records en route to the NFC Championship Game in New Orleans, but the Saints pummeled him all game, leading him to throw a late-game interception. Turnovers plagued Minnesota all game, but the later-discovered ‘Bountygate’ program by coaches Sean Payton and Gregg Williams pushed New Orleans to an overtime victory and a controversial Super Bowl berth.

Now in the 2017 season, the Vikings capped off a 13-3 season with the two-seed in the playoffs. This success occurred despite Minnesota playing with their third-string quarterback and second-string running back for most of the season, but much of it was due to the stout defense that led the league in numerous categories. Now that the postseason is here, heartbreak is typically in the back of the minds of many fans, but this year brings a strange, new sense of optimism.

The huddle broke off for perhaps the final play of the game, with Adam Thielen out wide left and three receivers bunched to the right, one of which was Stefon Diggs.

Case Keenum slowly stepped back into the shotgun, put his hands up and called for the snap. Diggs began his corner route to the right sideline and Keenum watched him the whole way. As the ball was released, a collective tension covered the stadium.

The failure of 2009 rang in the ears of Vikings fans for long after the loss to the Saints. It may have quieted down in 2012 when Adrian Peterson nearly broke the all-time rushing record, but it was clear as day when the Vikings were crushed by the Packers that year in the playoffs. It was at a near silence in 2015 when Teddy Bridgewater led the Vikings to their first NFC North division title in six years, but it was louder than ever as Blair Walsh’s 27-yard kick sailed wide left against the Seahawks that January.

Minnesota’s home opener in 2017 saw New Orleans come to town with blank slates for both teams. The Saints still employed Sean Payton and Drew Brees from that 2009 Super Bowl winning team, but they had a new addition: Adrian Peterson. The Vikings beat the Saints for the first time since 2008, yet a resounding regular season victory wasn’t enough to completely hush the ringing.

Both the Vikings and Saints went through complete transformations between September and January, yet both found their way into the playoffs, meeting for the first time in the postseason since that night in New Orleans back in 2009. As the stadium filled to capacity, the ringing was steady in fans’ minds, ready to be deadened once and for all.

Jumping out to a 17-0 halftime lead, Vikings fans had to really strain to hear that ring, but those who have lived through what this franchise has had to offer know that no lead is safe. Brees and the Saints reeled off three touchdowns to grab the lead and, other than the now piercing ringing, the stadium fell silent.

Stefon Diggs crossed the Saints’ 40-yard line and turned his head. No longer in stride, he backpedaled toward the ball, soaring right toward him. Approaching the 35, he leapt into the air, both hands reaching for the pass.

However, late in the contest, Drew Brees and the Saints drove into enemy territory and set up the go-ahead field goal with only 25 seconds left on the clock. For the first time all game, the stadium fell silent; the 66,612 fans in attendance watched in awe as a far-too-familiar scene began to unfold. With virtually no time left on the clock, a once 17-point lead dissipated into a seemingly gut-wrenching loss for a 13-3 Vikings team only two games away from hosting its very own Super Bowl.

Lofted where only he could catch it, Diggs secured Keenum’s pass and landed safely at the 35-yard line. Fans across the stadium screamed furiously for Diggs to safely get out of bounds for Kai Forbath to attempt the game-winning field goal.

Stefon Diggs wasn’t supposed to be here. Catching passes from three different quarterbacks in his three seasons in the pros, Diggs lacked consistency from his play caller. Diggs brings just as much flair and uniqueness to the game as Antonio Brown or Julio Jones, but he didn’t end the season with the most receiving yards on his team, let alone near the top of the league.

Despite the cries of many, Diggs stumbled as he turned to look upfield and there was no one in sight. The Saint’s corner took a bad angle and completely whiffed, leaving him with nothing but green grass ahead. Diggs sprinted toward the east end zone, ball outstretched, giving the Vikings the lead for good as time expired.

However, none of that matters. Once the playoffs begin, the past is meaningless. Where he played in college, where he was drafted, where he was on the depth chart then and where he is now – none of it has any weight in the hearts of Vikings fans.

All that matters is that he made the play.

As he crossed the goal line, Diggs put out his arms, taking in the raucous Minnesota crowd. Before his teammates managed to reach him, he took off his helmet and tossed it aside. In that moment, there was no noise; there was no ringing. They’d done it.