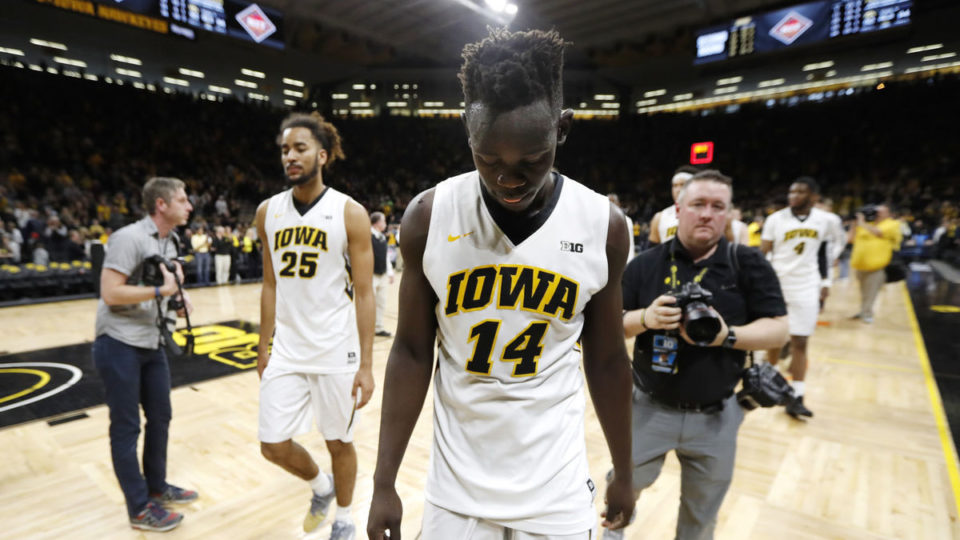 Iowa City – In the second round of the NIT the Iowa Hawkeyes took on 4th seeded TCU at Carver Hawkeye Arena on Sunday afternoon in front of a sell-out crowd. For post season basketball it was the type of atmosphere that any kid dreams of playing in front of. What kids don’t dream of is committing 12 turnovers in the first half. Led by three steals from Sophomore Guard Alex Robinson (who was receiving the start after All-Big 12 Honorable Mention, Jaylen Fisher, broke his wrist) TCU turned those turnovers into 21 points. That’s exactly what the Hawkeye faithful in attendance didn’t want to see. But, despite the sloppy play the Hawkeyes went into halftime down just four point’s thanks Senior Guard Peter Jok’s 13 points on 3-6 shooting for three.

After halftime the Hawkeyes came out and attacked the hoop early. Unfortunately while turnovers were the story of the first half, missed free throws were the headline in the second. Iowa shot a measly 41.2% on 7-17 shooting in the second half and 8-19 for the game. Add those 11 missed points to the 21 from turnovers in the first half and this game never goes to overtime, but, as the old saying goes, “that’s why they play the game.” While Iowa had its area of struggles, they were firing on all cylinders when it came to shooting the ball. “When you make 16 three’s and out rebound the opposing team, you’re supposed to win” Iowa Head Coach Fran McCraffery said after the game. The Hawkeyes shot 16-30 from three and 34-63 from the field.  Freshman Guard Jordan Bohannon led the attack notching another double-double to his young career with a game-high 25 points and 13 assists, after the game Coach McCraffery added that Bohannon is starting to “figure out the game.” While the season may be done for this year, figuring out how to be a big ten point guard is something that this team is going to need in the future.

Unfortunately, while Iowa was supposed to win this one, in the end, TCU came out on top 94-92. It was a heartbreaking overtime loss, but the loss the Hawkeyes might feel more moving forward is the loss of Peter Jok. No matter how much he, or his teammates, wanted Peter to walk off the court inside Carver Hawkeye Arena a winner after his last home game, Peter is a player that won’t soon be forgotten.  Over the course of his career at Iowa Peter hit on 216 three point shots, but what’s going to be missed the most isn’t his scoring, but the mentality he brought to the team. Redshirt-sophomore Nicholas Baer admitted that Jok, “is a bit of a goofball” after the game, but no one was short on compliments of Jok’s work ethic and how that correlated to his success. “He’s just a guy that’s always in the gym and our young guys have followed that lead” Coach McCraffery remarked after the game. No matter what ones thoughts on Peter might be, he deserved the round of applause from the fans that stayed after the game to give him his well-deserved send off.

For anyone that was worried that while this Iowa team is playing at a high level right now this break may lead to a setback, fear not. Coach McCraffery says they won’t take much time until they get ready for next season. For those of you that followed this season from beginning to end, know there were peaks and valleys, but there was always potential. If this team continues to grow and develop like they did this season, who knows how high the ceiling is.