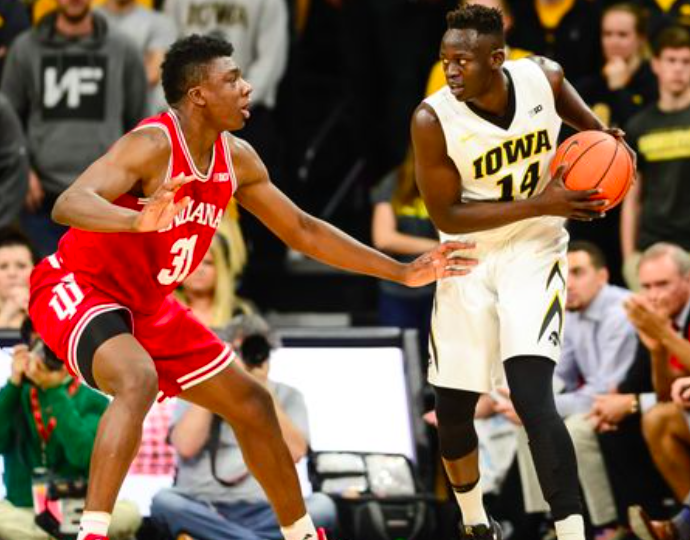 IOWA CITY, Iowa – Another sluggish start appeared to have the Hawkeyes well on their way to a fourth straight loss, this time to the hands of the Indiana Hoosiers.

The Hawkeyes had other plans.

After falling behind by as many as 13 in the first half, the Hawkeyes rallied to force overtime and held on to beat Indiana 96-90.

It was a total team effort for the Hawkeyes in this one. After falling behind 9-0 in the opening two minutes, Iowa coach Fran McCaffery called a timeout and subbed in a whole new group of five players.

“We needed some energy,” McCaffery said of the substitutions. “That next group came in and played with good energy and cohesion.”

The second wave of guys knew they had a specific job once McCaffery sent out their platoon.

“Better play well,” said forward Nicholas Baer. “Just try to weather the storm a little bit. I thought we did that. We were able to fight back and the end of the first half it was a one-point game.”

Without trying to do too much, the defense finally picked up for the Hawkeyes. After Indiana’s Josh Newkirk and James Blackmon, Jr. scored nine and six points respectively in the game’s first six minutes, the two didn’t score again the rest of the half.

Indiana was called for their first foul of the game with 8:47 to play in the half when De’Ron Davis bumped Tyler Cook. That sparked a 12-0 run for the Hawkeyes that was capped off by a three ball from Baer to tie the game at 26.

The teams traded baskets before the half and Indiana took a 33-32 lead into the locker room.

In the second half, the Hawkeyes took their first lead on a dunk and free throw from Cook with 2:13 to play. The teams traded free throws and layups in the final minute before heading to overtime.

After scoring 12 points in the first half and eight in the second half, Jok put up 15 points in the five minute overtime period. For the first time since his back and shoulder issues began, Jok was able to impose his will on a game at the offensive end.

After making 11 of his 12 free throw attempts in the overtime, he finished the day shooting 22-of-23 from the free throw line, good enough to set a new single-game record at Iowa, a record previously held by Don Nelson for 55 years (1962).

“I was surprised he missed the one,” McCaffery said of his senior’s performance at the line. “Not only does he make them, but he usually doesn’t hit anything but the net.”

After the game, Jok wasn’t exactly exhilarated over the news of being a new record holder.

“I don’t really care about all of that,” Jok said. “I just care about winning right now.”

Jok doesn’t put too much thought into his free throws. He works on them everyday, or as often as he can without upsetting his lingering shoulder issue, but he doesn’t stress over his form and mechanics.

“I don’t think about it, I just shoot with a free mind,” he said.

Jok finished with a game-high 35 points on 6-of-12 shooting from the field, 1-of-6 from three, and of course, his record-breaking 22-of-23 from the free throw line.

Aside from Jok, a number of different Hawkeyes stepped up when their number was called.

After picking up two early fouls, Cordell Pemsl played just two minutes in the first half. In the second half, he played 14 minutes and played with a lot of energy, finishing the game with nine points on 3-of-3 field goals and 3-of-4 free throws.

Ryan Kriener played alongside Pemsl a lot in the second half. He made both of his field goal attempts while also grabbing three rebounds and recording three blocks, including one on Indiana’s Curtis Jones with thirty seconds left in overtime that was the exclamation point on the victory.

Nicholas Baer continued to stuff the stat sheet as well. The sophomore finished with 10 points, seven rebounds, three assists, and two blocks. He was the only Iowa player to make more than one three pointer in the game (2-of-4). He also completed a put-back, and-1 dunk midway through the second half that pulled Iowa to within one. It turned Carver-Hawkeye Arena into a mad house.

If not for a new free throw record from Jok, the story of the game would most likely be Christian Williams’ performance. The back up point guard has seen his minutes fade and go to freshman Jordan Bohannon, but he has emerged recently as a defensive threat for the Hawkeyes, recording five steals in the team’s last three games.

It was his offense that shined for him on Tuesday. Williams scored in double figures for the first time in his career, finishing with 10 points on 5-of-6 shooting. He also added three rebounds and one assist, and more importantly, committed zero turnovers in his 21 minutes on the court.

“After I saw the first two (shots) go in, I got a roll a little bit,” Williams said.

After struggling out of the gate, Williams’ commitment to defense has allowed him to climb back into the mix as the season hits the final stretch.

“I struggled little bit at the beginning of the season, then I kind of picked things up defensively and that helped me transform my whole game.”

The deep rotation for the Hawkeyes proved to be the difference in this one. Twelve Hawkeyes played, nine of them playing double figure minutes.  While they stayed fresh, Indiana looked gassed at the end of the game. Four Hoosiers fouled out, and Thomas Bryant had four fouls, too.

The Hawkeyes next play at Maryland on Saturday at 5:00 P.M. CST on ESPN2. This will be the first of two road games against two of the top three teams in the conference (at Wisconsin on March 2). The team knows the next two games are important so that they can enter the Big Ten Tournament on a good note.