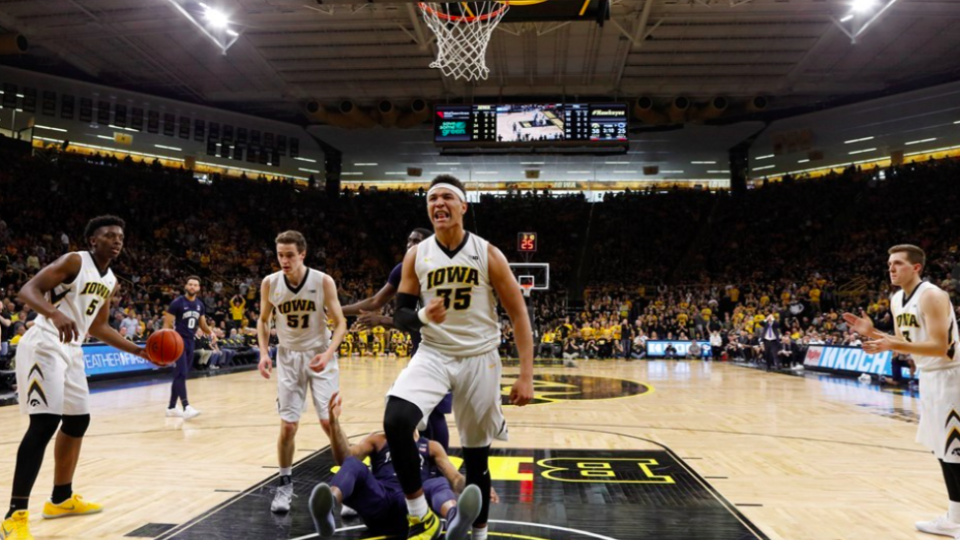 IOWA CITY, Iowa ­– Sixteen days ago, any hopes the Iowa Hawkeyes had of making the NCAA Tournament seemed to have vanished.

A four-point loss at home to Illinois on Feb. 18 was the team’s third straight loss, and the remaining schedule was not exactly favorable.

The schedule didn’t get easier, but the Hawkeyes did get better.

After beating Indiana 96-90 in overtime, Iowa had to hit the road for two games in a row, both versus ranked opponents. First, the Hawkeyes blew then-24th-ranked Maryland out of their own gym. Next, they took down #22 Wisconsin thanks to a three-pointer by Jordan Bohannon with less than 10 seconds to play.

Just like that, the Hawkeyes were starting to work their way back into the conversation for an at-large big. Beating Penn State 90-79 on Sunday to close the regular season on a four-game winning streak has them fully immersed in the bubble talk.

“There’s no better time to click than in March,” said senior Peter Jok following his 21-point performance in his (could-be) final game inside Carver-Hawkeye Arena.

As of Monday morning, the Hawkeyes’ rating percentage index (RPI) has jumped to 72 and the team’s record versus teams in the RPI top 50 is 5-7. ESPN Bracketologist Joe Lunardi has Iowa listed as one of the “First Four Out,” along with Rhode Island, Kansas State, and Illinois. Thanks to the late-season push, the Hawkeyes have put themselves in contention for an-large bid.

“I think we deserve to be in,” said Iowa head coach Fran McCaffery after the Penn State game. “What you have to do is not focus on thinking about it and talking about it.”

For a young Hawkeyes team, it may be tough to block out all of the noise and bubble talk that will undoubtedly swirl around them as they prepare for the Big Ten Tournament. Iowa’s leaders know they have to help keep the team focused on what they can control and nothing else.

“Young guys probably think about (the bubble) but I try not to let them think about it,” Jok said. “You just have to keep winning and whatever happens happens.”

While there has been some doubt from those outside the locker room, the team thought of themselves as a tournament team all season. They just needed to play like it every time they took the floor.

“We thought that we were (a tournament team) the whole season, we’ve just been playing inconsistently,” said freshman Cordell Pemsl. “I think we finally got that rhythm and that swagger back as a team.”

The team is certainly playing some of their best basketball right now. The four-game winning-streak is the longest of the conference season for Hawkeyes, and they’ve done it as a unit. Six different players have scored in double figures in the last four games, three of them have come off the bench to do so.

“If you look at how we’ve played these last four games, we’re a top team in the country,” said sophomore Nicholas Baer who has scored in double figures each of the last four games, including a career-high 20 points versus Penn State. “You want teams that are hot in in NCAA Tournament, teams that are playing their best basketball. If you look at the Iowa Hawkeyes, we’re playing our best basketball right now.”

Still on the outside looking in, the team knows there is still work to be done. The late push has been great, but they can’t let up yet.

“We do have a sense of urgency,” Baer said. “Every game is our biggest game.”

It is the general consensus that Iowa will have to win two games in the upcoming Big Ten Tournament if they want to move in to the field of 68. Iowa, the seven-seed, will face off with the 10-seed Indiana on Thursday at the Verizon Center in Washington D.C. If they survive that, they will meet Wisconsin, the two-seed, in the quarterfinals.

“We’ve got our hot streak going at the right time,” Pemsl said. “We’re hoping to carry that over into next week.”

There’s no way to predict exactly what the Selection Committee will do with Iowa until Selection Sunday arrives. The Hawkeyes know they have to keep winning, and if they win enough games, there won’t be anything left to chance.

“We just tell ourselves ‘we might as well just go win the Big Ten Tournament,’” Pemsl said. “They have to put us in then.”