This year, December came with a vengeance. Like November was pretty chill with overall fairly mild weather, and then as soon as December hit it was like WHAT’S UP HERE’S HELLA COLD AND HELLA SNOW, HAVE FUN. Since it is a brand new month in this rollercoaster of the 2016 year, I’m bringing you the next installment of Whisks + Whiskey: the column in which I get mildly to moderately intoxicated and try to bake delicious things.

We’ve officially hit ~*~Holiday Baking Season~*~, so for this month’s recipe I wanted to do something pepperminty since candy canes are definitely one of my favorite holiday candies and anything utilizing them is a winner for me.

*Mid-article mini rant: You know what I don’t get though? Weird flavored candy canes. Like why would you take something so good and so pure as the perfect flavor of peppermint candy canes and decide to be like “Why don’t we just completely get rid of the iconic peppermint flavor and replace it with something completely different?” Get out of my FACE with your Sweet Tart and Jolly Rancher candy canes. Those aren’t candy canes, they’re just misshapen suckers, okay?! End of rant; please enjoy your regularly scheduled content.*

I know last month I said the recipe was too easy, and although I meant to step up my game this month, I ended up doing a *whispers* box mix. Which I know is a bit insulting to the craft, BUT in my defense, I was making this with my boyfriend and I wasn’t in my own kitchen so I didn’t want to haul a bunch of flour and sugar and things around so we’re gonna let it slide this time. Long story short: I decided to make dark chocolate brownie cups with a white chocolate and peppermint topping.

What I’m drinking: This time around I’m drinking leftovers since I still had two each still in my fridge of October’s pumpkin ale and November’s cookie dough ale and want them GONE. I honestly don’t know why it’s taken me so long to get rid of them; I guess I just haven’t had time to drink lately. SIGH. I ended up having one of the cookie dough ales before I started and then throughout the process I had several gulps of that sweet, sweet Toasted Caramel Black Velvet whiskey. I definitely had a few more than my rules allow, but since I had supervision this time I figured I could get away with it without falling into the oven or something.

I didn’t expect this to be too difficult with it being a box mix of brownies.

Challenges (besides being intoxicated): Again, since this was mainly a box mix I didn’t really have too many challenging variables. The main one was obviously that I wasn’t in my own kitchen which is always a mild challenge. The other obstacle was that we didn’t really have any specific tools to crush the peppermint so we improvised with my bottle of whiskey and a grocery bag. 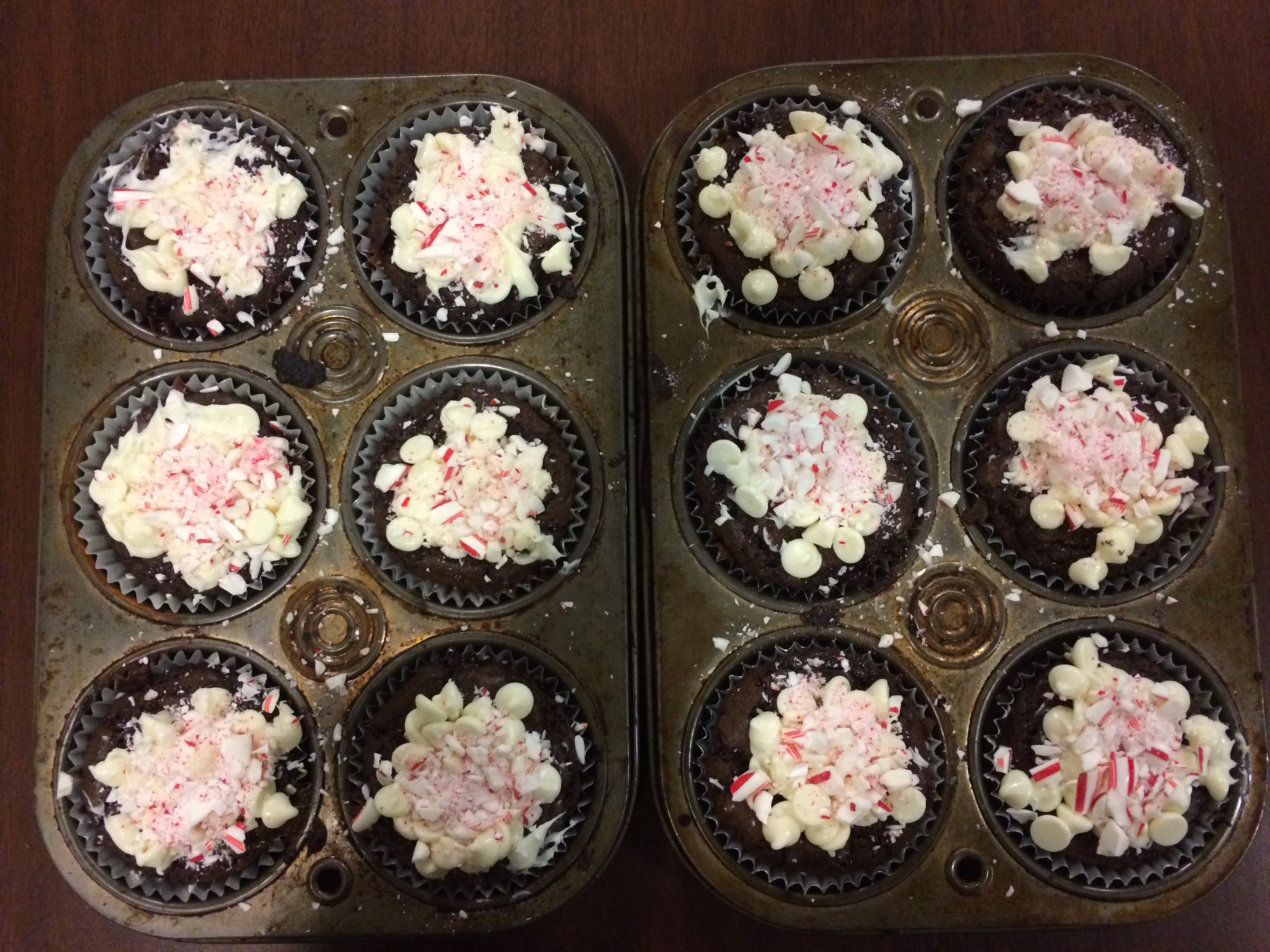 My drunk opinion:  The brownies are sticking to the liners which is ANNOYING, but otherwise they’re pretty tasty.

Jake’s opinion: This is the direct quote he wrote in my notebook: “It’s that dank ass, dank ass. 8/10, 9/10 with rice.” Which equates to “They’re good,” I think? (Also he was completely sober through this process if you were wondering.)

My sober morning opinion: They could definitely have used more peppermint flavor, otherwise they’re brownies and I can’t really complain about brownies.

Since this isn’t really a set recipe, if you’d like to try them for yourself just make a box of dark chocolate brownies in cupcake liners and add some crushed peppermint to the batter. (We only put in two candy canes and it wasn’t really noticeable, so I’d put in at least four.) Then once you pull them out of the oven, let them cool for a few minutes until they’re just warm to the touch and sprinkle white chocolate chips and crushed peppermint on top.

See you in the New Year, who knows what sort of baking adventures 2017 will bring.