Welcome back to Whisks + Whiskey, a column in which I get mildly to moderately intoxicated and try to bake delicious things. (If you need a refresher on the basic overview of the column you can checkout Episode 1 here.) It’s October which means we have officially entered ~*~THE PUMPKIN ZONE~*~

Personally, I am a huge fan of pumpkin at any time of the year. Pumpkin anything is usually amazing and I will rarely pass up the opportunity to eat something made from the beautifully orange squash—pumpkin seeds, pumpkin bread, pumpkin pie (one of the only pies I actually enjoy), pumpkin cookies, ect. However, the one thing I do not appreciate pumpkin-themed is the infamous Pumpkin Spice Latte, aka the “PSL,” from Starbucks.

Mini PSL rant: For the life of me I cannot grasp why this drink continues to be a phenomenon every single year. I get that most of it is due to the hype and everyone’s romanticized view of fall, but what I don’t get is why the masses suffer through such a mediocre coffee drink year after year. I will usually get one PSL, just one, every year at the beginning of the season solely to remind myself exactly how bland and disappointing the drink really is so that I don’t make the mistake of ordering it later in the season.

I suppose I also add to the “movement” by participating in it, but I can’t support it. The only hint of pumpkin in the drink is the potent orange color and the “spice” is tragically nonexistent. If Starbucks found a way to pump up the natural pumpkin flavor and infuse the drink with tangible spices, I would whole-heartedly support the movement; but until then I just can’t. Mini rant over.

Anyways, for this month’s installment of the series I decided to make a pumpkin chocolate chip scone recipe I found on Pinterest by a blog called Baker By Nature.

Here’s a quick refresher of the rules: 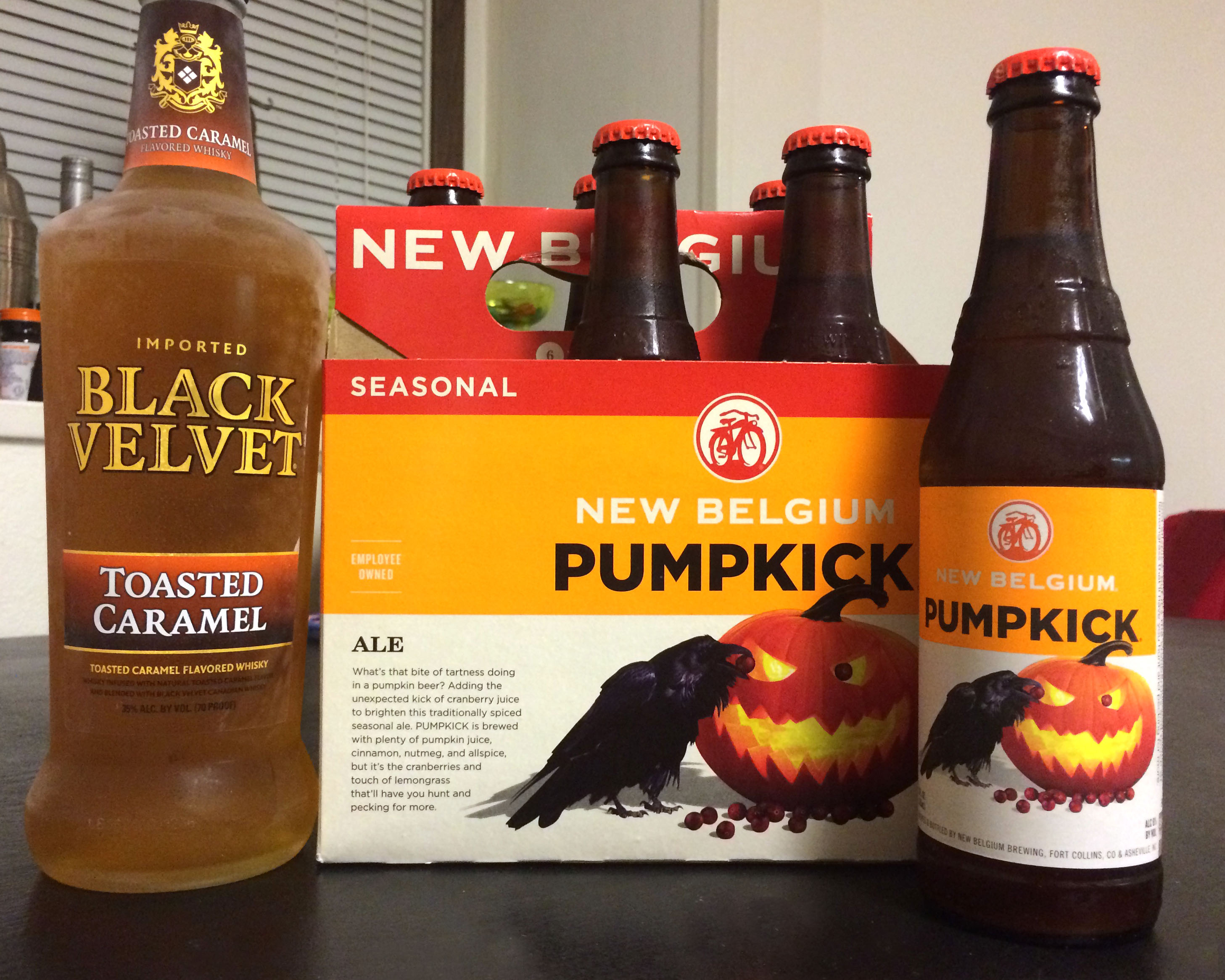 What I’m drinking: To honor the pumpkin theme even further I picked up a pumpkin ale made by New Belgium, called Pumpkick. I loved the packaging and was intrigued by the description saying that it had a splash of cranberry juice with the classic pumpkin and spices of pumpkin ale. It took me a couple of sips to taste the spice flavors, but once I did it was pretty surprising how potent it was without being overwhelming. Not sure if I’ll buy it again but it was certainly something different. After finishing my first beer, I took a shot of my Toasted Caramel Black Velvet I finally replaced. Then during the baking process I took one more shot of whiskey with my friends.

I’ve never made scones before so I wasn’t sure what to expect. Also for some reason I always associate a recipe calling for an egg wash with being more intensive.

Challenges (besides being intoxicated): Most of the measuring utensils in my apartment were dirty, which is saying a lot because we seem to have an excessive amount. I ended up making due with just a ¼ cup and ½ cup measuring cup which worked fine, but I had to measure the flour twice because I lost count the first time. Also, I only realized when the scones had 2 minutes left in the oven that I forgot to put on the egg wash and cinnamon and sugar topping. To improvise I pulled them out as soon as I remembered, added the topping, let them finish cooking for the last couple minutes and then turned the broiler on until the tops had a nice caramelized coating.

My drunk opinion: They’re super tasty, not a lot of pumpkin flavor though.

Julia’s opinion: “Yooo, they’re good! They’re really moist which is hard to do in a scone. I’d buy them.”

Rylee’s opinion: “I can’t really taste anything right now.” (Her and Julia had shared a bottle of wine at dinner.)

My sober morning opinion: I really, really like these. They are moist like Julia said, without not being scone-like enough and the mini chocolate chips add a perfect balance to the overall less sweet flavor. They are also much more orange than I expected from only half a cup of pumpkin. Maybe the PSL isn’t so unnaturally orange after all.

I love this recipe, definitely going to add it to my favorites.

Check back next month in November for something steeped even deeper in the essences of fall.