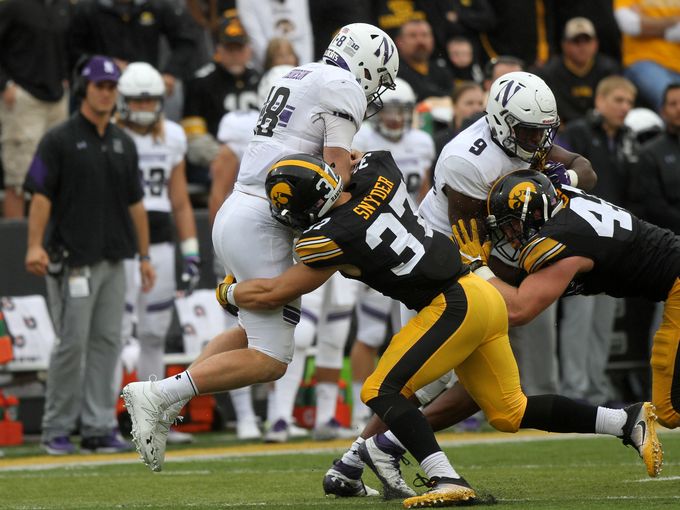 IOWA CITY, Iowa – Northwestern came to Iowa City on Saturday October 1st with the least-efficient offense in the Big Ten through their first four games of the season.

You would not have known it after watching their offense work against the Iowa defense.

In their 38-31 victory over Iowa, the Wildcats gained 198 yards in the rushing game and 164 through the air, with the bulk of those yards going to just two players.

“We do good, and then we give up too many big plays,” said Iowa safety Brandon Snyder of the Iowa defense. “We just have to be better on our assignments and trust each other.”

Northwestern head coach Pat Fitzgerald said that eliminating the mental mistakes is what made the difference in the offense compared to their first four games.

“I think the offense has been there,” said Fitzgerald postgame. “I just think that we’ve self-inflicted wounds.”

The Wildcats did not have many self-inflicted wounds on Saturday, as they were flagged just once in the game for five yards. On the flip side, Iowa was flagged six times for 70 yards.

There was a scary moment late in the third quarter when Northwestern’s Brett Walsh was blindsided while on punt coverage and needed extensive medical attention following the play. He was carted off the field and was able to give the fans an encouraging “thumbs-up” on his way out. All tests came back negative, and Walsh was able to travel with the team back to Evanston on Saturday night.

Iowa’s offense struggled yet again to run the ball, tallying only 79 net yards on the ground. Although LeShun Daniels, Jr. and Akrum Wadley each scored touchdowns (Daniels, Jr. one, Wadley two), each of their longest rushes went for just nine yards.

C.J. Beathard was sacked six times in the game, and it made it hard for the Iowa offense to get in to a rhythm, let alone stay in a rhythm.

“C.J.’s our leader,” Wadley said. “When he can’t really get going, it’s hard for the whole offense to get going.”

Beathard said that the team is not pointing fingers at one particular unit, but says the team has to play better collectively.

“We just have to play better team football as a whole,” Beathard said. “We have to get better in every part of our game.”

Much like what Fitzgerald said of Northwestern’s offense, Iowa offensive lineman Sean Welsh says it’s the mental mistakes that are plaguing the Iowa rushing attack.

“It’s the drive killers. It’s the penalties and it’s the sacks,” Welsh said. “It kills the momentum a lot. We need to be more consistent.”

Aside from the six sacks, a lot of things went well on Saturday for the Hawkeyes on offense. Beathard threw for 204 yards on the day, with the majority of those being credited to Riley McCarron and Jerminic Smith. Both players are expected to see an increased number of targets now that leading receiver Matt VandeBerg is sidelined with a foot injury for the foreseeable future.

McCarron set career highs in receptions with eight and yards with 78, and he also scored a touchdown late in the second half that gave Iowa their first lead of the game. The senior entered the game with only six receptions on the season.

On special teams, both McCarron and primary return man Desmond King had success in the return game. King racked up 162 total return yards on the day (77 punt, 85 kick), and McCarron had career longs with a 30-yard punt return and 54-yard kick return.

Even on another tough day at the office for the Iowa defense and rushing offense, there are some positives the teams can build on as they try to better themselves moving forward into the Big Ten season.

“It’s the 24-hour rule like always,” said head coach Kirk Ferentz after the game. “The bottom line right now is we’re a 3-2 football team with a lot of football left, but clearly we need to improve, and that’s the task for tomorrow.”

Iowa travels to Minnesota this weekend to play the Golden Gophers at 11:00 A.M. on October 8th on ESPN2/ABC.