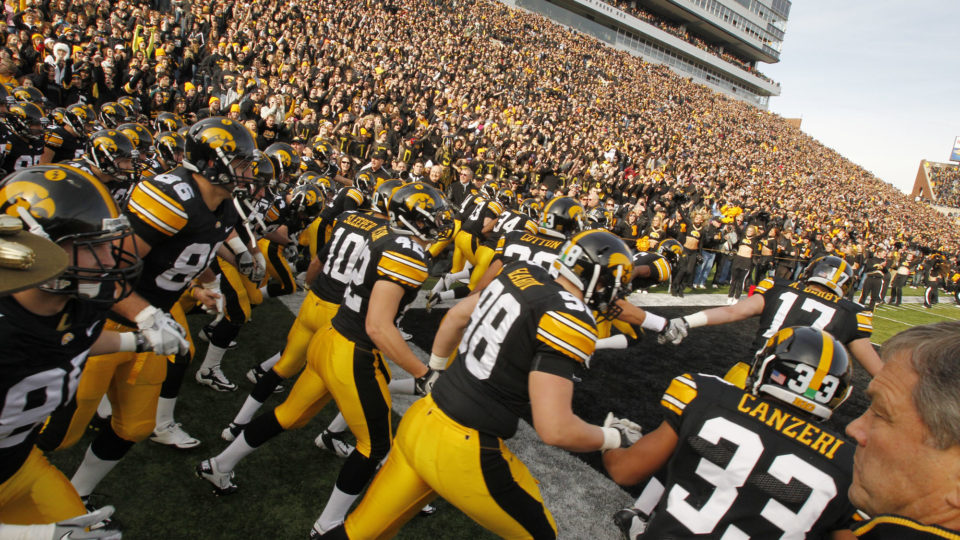 Iowa football is playing in its two biggest November home games since the 2009-10 season where the Hawkeyes held off Minnesota 12-0 to garner an Orange Bowl berth following consecutive losses, including what boiled down to a Big Ten championship against Ohio State.

Despite a roller coaster 2014 season, fans have reason to make Kinnick an electric atmosphere as two wins will likely give the home team a shot at the Big Ten title.

But, we have a few things to go over before we get to that. During my two years at Iowa, Kinnick Stadium hasn’t been what it was growing up. Noise is down, empty seats are more apparent and boos are more common than statement victories. Fans have seemingly grown tired, stale and annoyed with what has been seen. Blame can be spread from players and coaches, but don’t forget, crowds are a part of this issue, too.

Through five home games this season, Iowa has managed an average crowd of 67,415. Kinnick Stadium holds 70,585, so we’re not too far from being sold out, but can still do better. This also does not mean that 67,415 fans sit in their seats from kickoff to final score. I’ve included a few pictures gathered from Tweets showing the card stunt against Northwestern taken just moments before kickoff.

There are a few factors that can excuse Iowa from having capacity crowds throughout the entire game. First of all, for many of the games fans are either getting sunburnt or frostbite. Once you had in the 11 o’clock kickoffs on Saturday mornings, low-profile matchups such as Northern Iowa, Iowa State, Ball State, Indiana and Northwestern, and the style of play that can put the San Antonio Spurs to sleep, and quite frankly most are probably surprised we’re seating over 60,000.

That’s not even taking into account the students that begin tailgating at 5 a.m. and either can’t make it to the game, or leave at halftime. Take a look at the card stunt again and see which section is missing fans. Just getting to the ballgame is part of the issue, but that’s not the biggest focal point here.

Kinnick Stadium is full of a beautiful black and gold mixture that houses some of what I biasedly call the most passionate and loyal fans in the country. What needs to be fixed there? Timing.

The student section is the source of most cheers and noise in the stadium, so fellow students, please read on.

Not to call out our incredible cheerleaders, but they have one thing wrong: When to start the “Let’s go Hawks” chant. We all really appreciate you trying to get the crowd going, but right before Iowa is about to snap the ball is not the time.

Quarterbacks need to be able to call plays, shifts, hot routes, etc. at the line of scrimmage and the other 10 teammates need to hear him. The nosebleeds should be able to hear Kirk Ferentz chew his gum – that’s how silent it needs to be.

Clapping and applauding after the play is reasonable, but it should go right back to being silent immediately after our approval is aware. Also be wary of the no-huddle, because then snap counts and the ability to hear Rudock becomes even more crucial to the offensive flow.

On the other side of the ball, 3rd and 3 in the second quarter can be just as important as 2nd and 7 late in the fourth. We need to always make the opposing offense know that Kinnick Stadium isn’t a friendly environment. At many points, the stadium will become lackluster, especially when the game is happening on the opposite side of the student section. Iowa home games should never feel like a neutral field.

Students, don’t forget that when we get loud, the rest of the stadium is always soon to follow. If you still have your voice on Sunday, you’ve let the team down. Imagine how much fun Iowa City will be if the Hawkeyes are battling for the Big Ten Championship. Having to go a day or so with a voice that squeaks from time to time isn’t much of a sacrifice in order to help make that happen.

In its last 18 home Big Ten games, Iowa is just 10-8. That’s against what has mostly been average – at best – competition, and shows that there isn’t much of a fear going into Kinnick.

Wisconsin is going to be, by far, Iowa’s toughest contest to date. The Hawkeyes are going to need everything going their way to come out on top, and that includes the fan base. It’s up to us to force the Badgers into false starts, delay of games, miscommunications and unnecessary timeouts. Scream, go nuts and represent your school in front of a national audience to set up a potential showdown with Nebraska on Black Friday.

And then do it again.

Let’s regain what made Kinnick Stadium one of the most feared stadiums in the Big Ten just a decade ago. Back our players to fire them up from the time Back in Black sounds to when the band plays In Heaven There is no Beer. Make opposing teams get on the bus with a loss and argue about if the receiver ran the route wrong or the quarterback called the wrong play. With five seconds left, make sure whoever is visiting us has no timeouts and has to throw an unlikely Hail Mary instead of have that chance at the game-winning field goal. It’s up to us to cause these circumstances and advantages that can make or a break a game, and in some cases, a season.

On a final note, showing your disapproval for a 3rd-and-8 halfback draw is one thing, but booing the players as they head into the locker room is another. We as fans are there to help our team feel more comfortable than the other inside the bricks of Kinnick.

When Saturday rolls around do your pregame rituals, wear your lucky sweatpants and cheer your lungs out for a Hawkeye victory.

Just make sure we’re not on offense when you do.