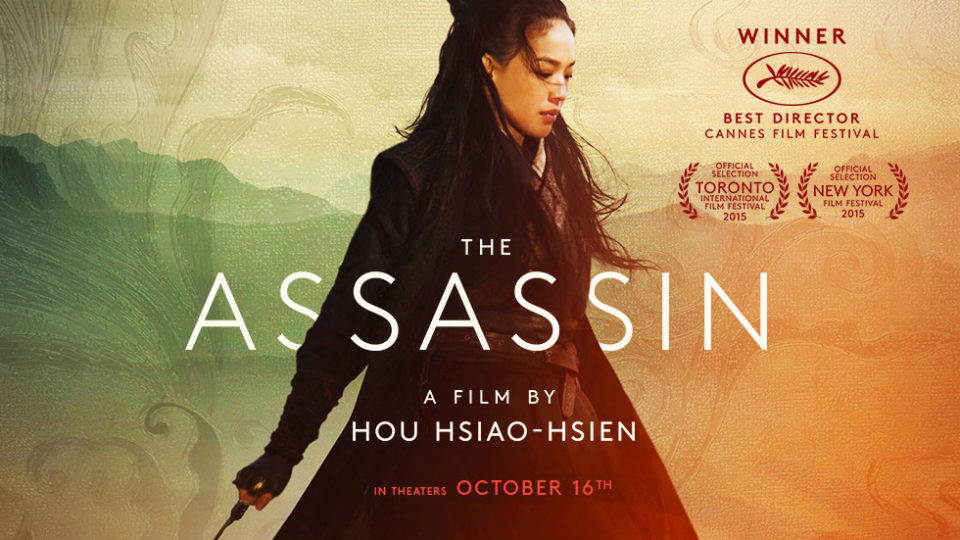 You’d be forgiven for thinking Hisao-Hisen Hou‘s newest critical darling is an action film. With a name like The Assassin and being branded under the “martial arts film” genre, there are certain expectations that viewers might approach the film with. But The Assassin is not such an easy film. The plot is both sparse and complex, and will leave the audience with more questions than answers. In fact, I won’t even go into much detail about the plot; both because I’m not exactly sure of it myself and because I don’t think its all that important. This is a film that relies heavily on its ability to frustrate both expectation and convention, and works on a filmic logic that is completely its own.

The easiest aspect of the film to praise, and the one that will stand out the most, is its sheer visual beauty. The mise-en-scéne is meticulous, ornate, and perfectly composed. Each scene feels less like a normal movie, and more like a living painting. The characters move softly and subtly, and there is drama and tension in their stillness. In the indoor scenes, we are given a view into the life and living spaces of the dynastic nobility. The period costumes and sets look phenomenal, and are presented in bright and contrasting colors. In the outdoor scenes, the raw power of nature is displayed. Characters are often filmed from a distance, making them look particularly small compared to the stunning mountain landscapes or dense forests that serve as the background. Shirking a more traditional widescreen aspect ratio for a nearly square frame also makes the screen feel more like a moving painting. In short, this is one of the most visually beautiful films I’ve ever seen.

Despite its emphasis on stillness, The Assassin manages to keep its audience engaged in unique ways throughout its duration. The camera is almost never still, yet it is often rooted in one spot for an entire scene. It slowly pans from character to character, from action to action, sometimes pushing in or pulling out. This is in sharp contrast to the general stillness and smallness of movement seen in the characters themselves. The constant camera movement is slightly unsettling, but it’s part of a greater general mood of tension and almost confusion. There are occasional instances of very slight slow motion, or a hint of distortion in the colors. Just enough to make you wonder if it might not really be there. Enough to make you question what you are looking at.

The editing also adds to the audience’s confusion. Many laws of continuity are tossed aside with shots suddenly jumping forwards or backwards in time, despite being in the same location. The film has its own sense of time and never allows the viewer to understand exactly when the different scenes are taking place. Slow dissolves help to segment the film, but it’s hard to know how far along they progress time; sometimes elipsing days, sometimes only minutes. Long and seemingly unimportant scenes are shot in long takes, and the lack of cuts builds tension as the audience waits for something to happen.

The audio is also an important but elusive aspect of the film’s atmosphere. Chirping birds by day and crickets by night create the soft background that is the only sound output for large portions of the film. Dialogue is rare, delivered softly, and often only leads to more confusion for those still trying to follow the story. It’s difficult to separate the sounds coming from the world of the story, and those that might be considered a “soundtrack”. Occasionally, characters may be seen playing musical instruments, but these visuals don’t always match up with the sounds the audience hears. A slow and dramatic drum might beat during a scene but it’s unclear if the characters can hear it, and while the tension rises it might not ever pay off.

The near silence of the majority of the film is shattered by its scenes of violence. With no background music to set the mood, each fight has the viewer holding their breath. The clash of steel and bodies is sharp and harsh; the scenes of violence leave the audience more scared than satisfied. Combat is not flowery or over played, each swing of the sword feels like it can carry the end of the characters we’ve seen. The combat scenes also don’t feature the same payoff as other action films; many duels are left unfinished as the assassin can’t bring herself to kill.

In the end, The Assassin is a difficult film. As the credits began to roll (over the sound of bagpipes of all things), I could separate the entire audience into two categories based on their reactions: Those that hated the film because it confusing and moved at a glacial pace, and those that had loved it (likely for those same reasons). So be wary with this movie. Going into it with any sort of expectation will likely only lead to disappointment. But if you’re willing to try it with an open mind, to take on an experience rather than be told a story, than you might find yourself in awe of what seen and felt.

Click here to see if the Assassin is playing in a theater near you.