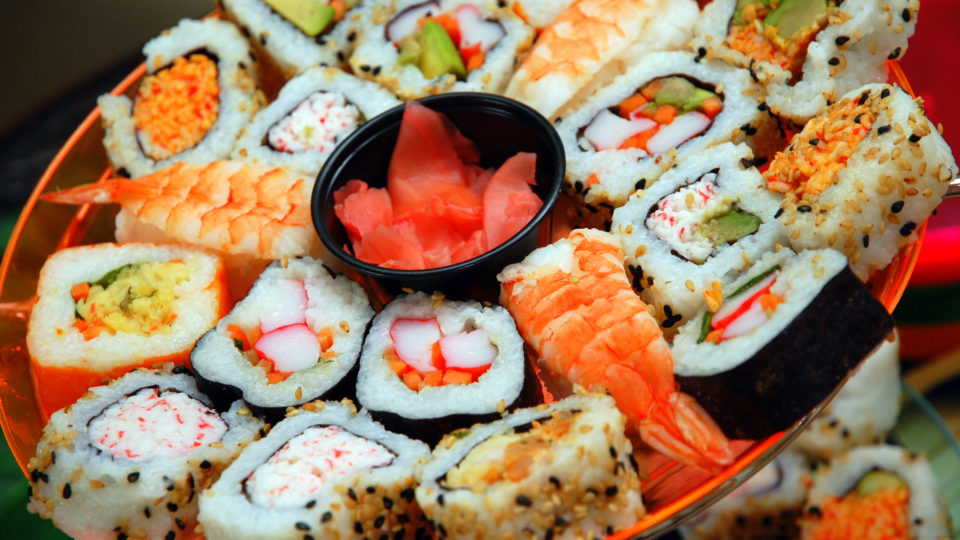 There is a general understanding that sushi is good for our health. It’s a low fat calorie diet; it has a decent amount of protein and vitamins.  But when you go to a sushi restaurant and look at all different kinds of sushi that with high calories like spider roll and tempura roll, you must be wondering how could this be “healthy”? That’s probably because there is a lot of Americanized sushi in sushi restaurants in the United States.

Sushi started its appearance in the United States in the 1960s in Little Tokyo, Los Angeles. Later sushi became more and more popular among Hollywood celebrities, as the invention of California roll boosted its popularity. Big cities like New York City and Chicago soon had their own sushi restaurants and by the late 1980s, and sushi had become very popular among the American population.

Now, sushi seems to become part of our daily diet, as different kinds of sushi are not only sold in Japanese restaurants, but also in grocery stores and even convenience stores.

But is the sushi you buy in the United States authentic?

What do the Japanese think of the Americanized sushi?

In order to find out the answer, I bought three different kinds of sushi from restaurants around the Iowa City area: California roll, Godzilla roll, and Philadelphia roll; and I invited two people to taste them and guess their names.

Let me introduce our brave tasters: Rumu Meng, the president of Japanese students and scholars’ club; and Sayaka Okumura, a former University of Iowa transfer student from Japan.

The first piece of sushi they tasted was the California roll, and none were able to correctly guess the name of the sushi.

Although the ingredients and the shape of the California roll seems identifiable to Americans, Japanese people do not seem to be able to recognize it. Sayaka pointed out that in Japan, avocado does not exist as an ingredient in sushi; traditional Japanese sushi uses raw fish instead of cooked fatty tuna; and, most importantly, Japanese sushi never put sesame inside the rice.

Although California roll was invented in Southern California in the 1970s, some Japanese chain sushi restaurants are now starting to serve California rolls in Japan, as an imported dish from the United States, according to Sayaka.

The second piece of sushi was the Godzilla roll. The Godzilla roll, for those unaware, is made of shrimp tempura in a roll, and top with cream cheese and spicy mayo. Both of the guests found the taste of the roll quite “amazing”, but still neither could correctly guess the name of the sushi.

Americanized sushi named with words from Japanese pop culture. According to Rumu, one kind of such sushi is called “Naruto roll”, which named after the main character in the Anime, is wrapped with cucumbers.

I’m sure some will be surprised to know that many types of sushi in the United States are not authentic, even though they taste good.

Do you like sushi? Are you surprised for finding out that the sushi here isn’t authentic? What do you think of the Americanized sushi? Leave a comment below.

Yihao is also the host of  the Global Perspective show on KRUI 89.7 fm every Wednesday from 3-4 pm. The show focuses on international students’ issues in Iowa City, as well as introducing different cultures around the world.

One response to “Global Perspective: Is Your Favorite Sushi “American”?”