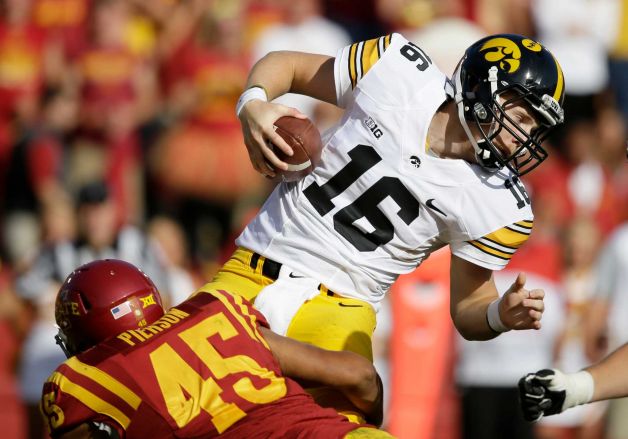 AMES, Iowa- It has been a rough week for the University of Iowa football team and their fans.

After the sudden death of former Hawkeye safety Tyler Sash on Tuesday, Kirk Ferentz and the Hawkeyes have been dealing with not only preparing for a game against their biggest rival but also mourning the loss of one of the greatest players to put on an Iowa Hawkeye uniform.

“It’s tough to deal with things like this, but the support of former players and fans have been outstanding for not only us but Tyler’s family,” Ferentz said.

After the Hawkeye’s 31-17 victory inside Jack Trice Stadium on Saturday, Ferentz was just glad they escape Ames with a big victory.

“We had some very difficult circumstances this week, and our guys battled.”

Junior quarterback CJ Beathard, who is only starting his third game in an Iowa uniform, had himself quite the game through the air and on the ground. He completed 15 of his 25 passes for 215 yards and three touchdowns on the day.

He also had 10 rushes for 114 yards on the ground, one of two 100-yard rushers for Iowa. Beathard saw good pressure from the Iowa State defensive line most of the game, and he used his legs to make something out of nothing and give Iowa a needed lift on the ground with runs of 44 and 57 yards on the day.

“I was dying after those runs though,” Beathard joked.

Beathard’s favorite target on Saturday was receiver Matt Vandeberg. Vandeberg seemed to take the role of security blanket for Beathard, especially on third down. He caught a team high nine catches for 114 yards and a touchdown on a fumble recovery, including a big 48-yard catch on a 3rd and 21 for the Hawkeyes.

Despite the win, however, Iowa did have two key players get hurt and miss the majority of the game. Senior defensive lineman Drew Ott left the game in the first quarter with a wrist injury. Ott did go to the locker room for further examination, and was back on the sidelines in the second half wearing a sling and no pads.

Also, senior running back LeShun Daniels Jr. did not play in the second half after suffering an ankle injury. Coach Ferentz said he would know more about both players and their availability for next week’s game against Pittsburgh on Sunday.

Without Ott on the defensive line, Iowa struggled at first with getting pressure on Iowa State quarterback Sam Richardson. However, they did sack the Cyclone quarterback four times. The defense also held the Iowa State offense to 67 yards on 31 plays an no points in the second half.

Nate Meier and Josey Jewell led Iowa defensively with seven total tackles apiece. Desmond King had an interception and a 50-yard punt return to overshadow his rough start to the day on special teams. The Hawkeye defense also had six tackles for loss and three quarterback hurries.

“If we want to be competitive in November like we want to, we have to win games like these and I thought our guys did an awesome job closing things out,” Coach Ferentz said.

Iowa moves to 2-0 on the season, and they will be action next Saturday at Kinnick Stadium under the lights against the Pitt Panthers. We will have the game on KRUI and krui.fm. Kickoff is set for 7:00 P.M.