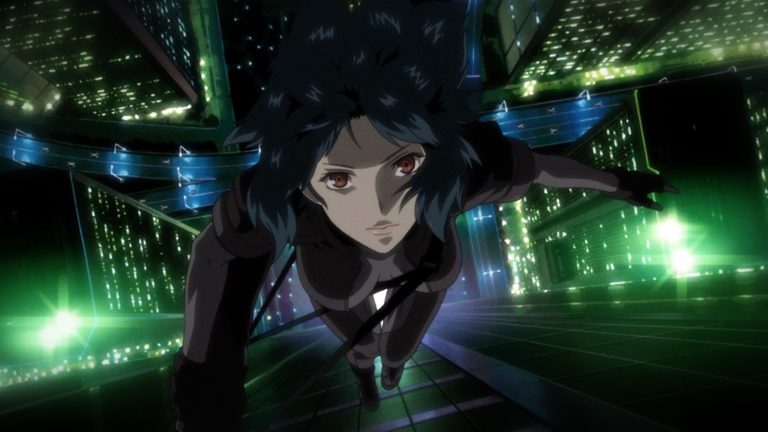 Ghost in the Shell (1995) is one of the most important animated films of all time. While it may be best categorized as a Cyberpunk film–a genre known for its near-future setting with emphases on technological advances and moral decay–to write it off as another Japanese sci-fi anime is to ignore the subtlety and care in which the film deals with a wide variety of topics blanketed in its gorgeous visuals and haunting soundtrack. 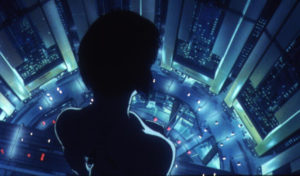 The story deals with Major Motoko Kusanagi and her police team as they try to track down the infamous “Puppet Master” hacker in futuristic (2029 to be exact) Japan. Throughout the complex and intriguing story, director Mamoru Oshii spends time pondering a wide variety of subjects. These include technology, religion, evolution, conspiracy, gender/sexuality, identity, and the meaning of life itself.

The film, at its core, asks the audience to question their ideas of life. The characters are often inhabiting cybernetic bodies, known as “shells,” while their conscious identity, known as a “ghost,” do all of their thinking. While they may have human thoughts, emotions, and “souls,” these characters struggle with being able to consider themselves human.

The film poses a number of thought provoking questions. What if some sort of artificial intelligence is able to become self-aware? What would distinguish it from a living being? Are humans really anything more than a collection of memories, internal data, and synapses processed and stored throughout our lives? 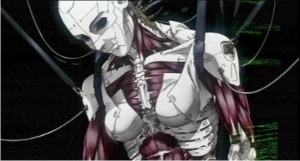 Ghost in the Shell also forces its audience to think about their ideas of evolution and the future of the human species. With technology becoming an increasingly important and irrevocable part of the human experience, how will it shape our destiny as a species? Oshii explores the idea of technologically-enhanced human bodies, as well as the possibility of Artificial Intelligence becoming a sort of “next-step” for the evolution of humanity.

Reaching even further, the film also incorporates a fascinating feminist analysis. With increased technological alterations to human bodies, the idea of gender distinctions seems to have fallen by the wayside. Major Motoko inhabits a distinctly feminine (yet not clear-cut female) body, yet her personality and position within the police force assumes a sort of masculinity. The sub-plot of Motoko’s struggle with her own identity, including her gender and sexuality lead to a very interesting discussion about the politics and power dynamics of gender in a futuristic setting.

With all of these heavy and incredibly complex philosophical themes, it is important to remember that Ghost in the Shell is still an action film. It is filled with car chases, military encounters, gunfights, and awe-inspiring martial-arts sequences. All of these scenes are beautifully displayed in a mix of hand drawn animation and computer-generated imagery. At the time, the artwork of the film was considered the technological forefront of animation, still reigning true to this day in both beauty and power. 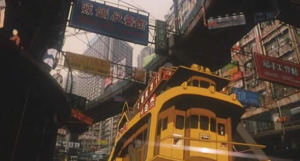 Unfortunately, there are a couple of hurdles that the average American film lover may have to deal with if they are to appreciate a masterpiece like Ghost in the Shell. First of all, there is the heavy presence of Sci-fi elements within the film. This may not be an issue for everyone, but I know that for myself, nothing will turn me off more than cheesy Sci-fi tropes. However, you can be sure that this film is able to deal with its futuristic setting in a believable and fascinating way. Another common complaint is that the entire film is animated. For many Americans, it can be hard to view animation outside of the realm of children’s cartoons. However, this film deals with a variety of mature subjects–often in gory detail–and is far from anything you might find from Western animators like Disney. Finally, there is the issue of the subtitles. The film was originally released in Japanese, and many purists believe that the original Japanese sound is the best. However, if you’re not warmed to the idea of reading all of the dialogue in subtitles, the English dub is well-acted. However, in my opinion, the English dub tends to simplify and dumb down some of the more subtly crafted Japanese dialogue.

As a side note, if you consider yourself a fan of The Matrix films, you’ll surely enjoy this film. The creators of The Matrix (the Wachowskis) are very vocal fans of Oshii’s work and many iconic shots from the film are taken almost exactly from images first seen in Ghost in the Shell.