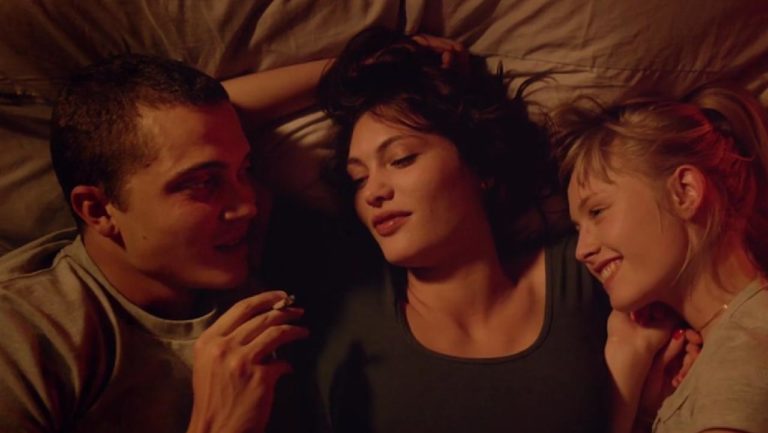 Disclaimer: This article discusses material that may not be appropriate for minors

Love is the newest film from infamous director Gaspar Noe. Released in 2015, the 3-D film immediately garnered attention for its use of nudity and explicit sex. Love blurs the line between art-house film and pornography in a way that is rarely seen, especially on such a wide scale. Love is not without its critics, and many of their points are valid; Love is not a perfect movie. But, it is certainly different, and for many, the film’s desire to push boundaries is enough to deserve attention.

The film follows Murphy (as in “Murphy’s Law“, which the film explicitly states in bold letters), a young father who wakes up on New Year’s Day deeply unsatisfied with his life. He receives a call from his ex-girlfriend’s (with the equally loaded name Electra) mother, asking him if he has seen Electra lately, fearing that she may have hurt herself. This call puts Murphy in a tail-spin, and he spends the rest of the film reminiscing on his passionate but volatile relationship.

Gaspar Noe is known as a boundary pushing director. His other feature length films, (I Stand Alone, Irreversible, and Enter the Void) all deal with tough subject matter, and his style of film making is designed to disturb instead of entertain. His work in Love is no different, and reminds me quite a bit of Lars von Trier‘s Nymphomaniac. Beyond the exploration of somewhat similar subject matter, and the explicit depictions of sex, the two films also share a fourth-wall breaking story telling technique. Love is filled with wild insert shots (including an ejaculating penis that is somewhat frightening to see in 3-D), harsh jump cuts, and non-linear vignettes. This is definitely an artsy film, and anyone coming into it with the same expectations they would have for a Hollywood blockbuster will be in for quite the surprise.

Despite all the sex and artsy film techniques, or perhaps because of it, Love still has its shining moments. There are moments of real and relatable intimacy between the characters. While romantic comedies may play on our happiest fantasies of love, Love brings to the forefront our darkest realities. There are moments and feelings in Love that are deeply human, but seem somewhat unexplored in movies. It takes a bold and honest look at a deeply dysfunctional relationship, and forces its audience to feel both revolted and sympathetic to its main characters. And that, I suppose, is enough for a piece of art, isn’t it?

Click here to see if Love is playing in a theater near you.