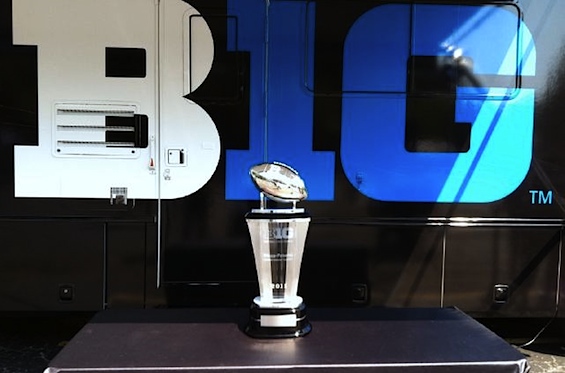 The first eight weeks of the college football season have provided us with a lot of excitement, frustration (depending on the fan base), surprises, and confusion.  The Big Ten especially fits this bill, as it got off to a horrible start, and as a result the league is for the most part, wide open.  This column will feature a rundown of every Big Ten team and where they stand currently.

Michigan State (6-1, 3-0): After an early season loss to Oregon, Sparty has won their last five games, but they haven’t made it easy.  On October 4, they led Nebraska 27-3 in the 4th quarter but had to get a late interception to hold on for a 27-22 win.  They struggled in a 45-31 win against Big Ten doormat Purdue, and struggled for one half against lowly Indiana.  While Michigan State is winning games, they need to improve if they want to get back into the playoff conversation.

Ohio State (5-1, 2-0): Ohio State got off to a rough start, as they barely squeaked by Navy in the opening and suffered Urban Meyer’s first home loss at Ohio State in week 2 against Virginia Tech.  Since then, however the Buckeyes have been firing on all cylinders and are averaging a whopping 56 points in the four games since.  Ohio State’s offense, led by redshirt freshman quarterback J.T. Barrett, appears to be finding its stride at the right time with a trip to East Lansing looming on November 8.

Maryland (5-2, 2-1): Big Ten newcomer Maryland may be one of the hardest teams to figure out.  They have a good offense, led by quarterback C.J. Brown and dynamic play-making receiver Stefon Diggs, however the defense still has some questions.  Maryland did show some mental toughness, scoring 38 of the next 45 points after falling behind 14-0 vs Iowa this past week.  Maryland’s schedule gets considerably tougher as they travel to Penn State and Wisconsin for their next two games, followed by a visit from Michigan State.  The key for the Terps will be the health of C.J. Brown, who has been knocked out of four games this season.

Rutgers (5-2, 1-2): Rutgers is another team that varies from week-to-week. After a hard fought victory over Michigan on October 5, Rutgers turned back around and got crushed by Ohio State in Columbus this past weekend.  Gary Nova is very hot and cold as a quarterback, and the offense  as a whole is inconsistent.  Rutgers might have the toughest remaining schedule of any Big Ten team, as they still have to play Nebraska, Wisconsin, Michigan State, and Maryland.

Michigan (3-4, 1-2): Where to begin with this Michigan team.  Brady Hoke’s team is coming off a bye and will be hosting Michigan State this week.  They got a huge win two weeks ago against Penn State, possibly saving Brady Hoke’s job for the time being.  However, this team is still a mess.  The offense is a complete disaster–the offensive line can’t block anybody and Devin Gardner still turns the ball over too much–and the defense is inconsistent.  It really doesn’t seem like Brady Hoke will be in Ann Arbor much longer, as the losses will continue to pile up unless something changes drastically.

Penn State (4-2, 1-2): Penn State looked like a dark horse team at the beginning of the season, even getting their bowl ban lifted.  However, their flaws were exposed in a 29-6 loss to Northwestern where they were dominated in every phase of the game.  After a bye week, they came back and lost to lowly Michigan. It doesn’t get any easier as Penn State hosts red-hot Ohio State this week.  A once promising season has faded into mediocrity for Penn State.

Indiana (3-4, 0-3): Indiana’s problem this season is the same problem they’ve had for years.  Their offense can score and be as explosive as any, but their defense remains a huge issue.  After a stunning victory at Missouri on September 20, Indiana proceeded to get destroyed at home by Maryland.  Tevin Coleman might be the best running back in the nation, but now that quarterback Nate Sudfeld is out for the season and a suspect defense, it’s hard to imagine Indiana getting many more wins.

Minnesota (6-1, 3-0): Don’t look now, but Minnesota is first in the Big Ten.  Jerry Kill’s team has gotten off to a great start, thanks to a favorable schedule, and great defense.  After dominating Michigan three weeks ago, Minnesota was able to squeak by Northwestern and Purdue the past two weeks.  The offense for the Gophers is very one-dimensional as Mitch Leidner is more of a threat running the ball than he is passing, but David Cobb is another one of the many great running backs in the Big Ten.  However, Minnesota’s last four games are brutal, as they play Iowa, Ohio State, Nebraska, and Wisconsin to end their season.

Iowa (5-2, 2-1): It has been a very up and down season for the Hawkeyes.  There was a quarterback controversy between Jake Rudock and C.J. Beathard for a couple weeks, and the offense has been inconsistent for most of the year.  While the Hawks are 5-2, a frustrating loss to Iowa State early in the season and shaky play in a lot of their other games have been cause for concern for Iowa fans.  Iowa has some big games coming up, starting in two weeks at Minnesota in a game that will be crucial for determining the division.

Northwestern (3-4, 2-2): Northwestern has had a very strange season.  They played exceptionally poorly in their first three games, losing two of them, Northwestern responded with a shocking 29-6 domination against Penn State and then beat Wisconsin the following week at home.  Unlike typical Northwestern teams, the defense is the strong part of the team and the offense has been ineffective for the most part with Trevor Siemian at the helm.

Wisconsin (4-2, 1-1): Wisconsin has been the same team for years now.  They have arguably the best running back in the nation with Melvin Gordon, however their offense is still largely ineffective thanks to a non-existent passing game.  Tanner McEvoy struggled early in the season, and was benched in their loss against Northwestern.  He was replaced by last year’s starter Joel Stave, who hasn’t been much better.  The running game of Melvin Gordon and Corey Clement is great, but Wisconsin won’t be doing anything until they have some semblance of a passing game.

Purdue (3-5, 1-3): Purdue has taken some strides in recent weeks.  Austin Appleby led the team to their first Big Ten victory in the Darrell Hazell era on October 4th at Illinois, and they hung in there against Michigan State and were winning for most of the game this past weekend against Minnesota, but lost 39-38.  Purdue likely won’t be going bowling this year, but things are looking up for the Boilermakers.

Illinois (3-4, 0-3): Illinois football is an absolute fiasco.  In the Ron Zook era, it was always the offense that couldn’t seem to get it done, and now that the offense is finally rolling, the defense can’t stop anybody.  Illinois is easily the worst team in the Big Ten, and it’s not even close.  Tim Beckman is 1-18 in his career in Big Ten play, and will almost certainly be fired after this season, if not before.

The first 6-8 games are upon us and this much is clear from the Big Ten.  There are three contenders (Michigan State, Ohio State, Nebraska), three terrible teams (Indiana, Purdue, Illinois), and then everybody else. With some of the biggest match-ups yet to be played, the Big Ten will be entertaining from now until December.