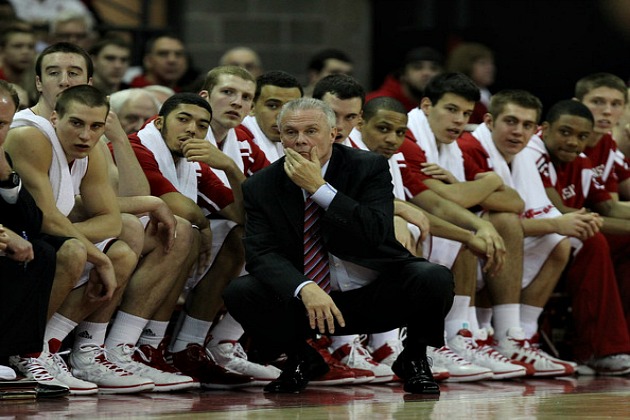 Coming off its first Big Ten win of the season last Sunday at Northwestern, the Iowa men’s basketball team suddenly finds itself hosting the conference’s top team.  No, it’s not ranked and highly-athletic Michigan, Indiana, Michigan State, or Minnesota.  Unranked Wisconsin comes to Carver-Hawkeye Arena tonight to stay perfect in conference after doing what many did not see coming–beating #2 Indiana 64-59 last Tuesday in Bloomington, Indiana.

Though many casual college basketball fans–and certainly those at Assembly Hall Tuesday night–may have been stunned by Wisconsin’s win, it’s not surprising to those who have been observing Wisconsin head coach Bo Ryan impart his skills on his team the past 12 years.  Wisconsin’s consistently dependable defense and thoughtful shooting have been Ryan’s recipe since he first arrived in Madison.

Consider that Ryan’s Badger teams have made the NCAA Tournament all 12 years he’s been head coach.  He has made the Sweet 16 four times, the Elite 8 once, and won the Big Ten regular season and conference tournament championship multiple times (he won both during the 2007-2008 season).  He has won almost 72% of his games in the Big Ten.  That winning has left not one of his 12 teams below fourth place in the Big Ten.  Ryan also won four national championships at the Division III level with Wisconsin-Platteville.

Iowa’s relationship with Ryan and his teams has been downright miserable until last year.  Iowa hadn’t swept Wisconsin since 1995 and lost nine straight games in Madison before a shocking 72-65 win over the #11 Badgers on New Year’s Eve of 2011.  Iowa completed the unexpected sweep in late February of last year, 67-66, behind another 30-point frenzy by Matt Gatens.  Admission was free that day for students.  They turned out in force and gave Carver a real advantage.  Imagine that?

Outside of last season, though, most of the Hawkeyes’ games against Wisconsin–under Steve Alford and Todd Lickliter–had been wretched blowouts.  Perhaps things are changing under Fran McCaffery, but no team ever has the upper hand over Ryan for very long.  And some have had no hand at all in the series as of late.  Indiana, for instance, has now lost 11 straight to Ryan to give him a 17-3 career record against the Hoosiers.

This game will be just as tough for Iowa as the Indiana and Michigan State games were, if not tougher.  Iowa lost both of those contests at home by four points or less, but Wisconsin has a special way of punishing its opponents off turnovers because Ryan’s players do not return the favor: Wisconsin commits the fewest turnovers per game than any team in 345 Division 1 teams (8.9 per game).  The young Hawks seem to turn the ball over more when things aren’t going well, but also display frustrating habits like turning the ball over in transition.  Guards Anthony Clemmons and Mike Gesell have, on multiple occasions, heaved the ball out of bounds when attempting the fast-break lob down the court.

If Iowa wants to win, it must slow down its game and play Wisconsin’s style.  It seems unlikely that an Iowa squad averaging about 65 points per game in Big Ten play is going to suddenly unleash 80 on one of the country’s most disciplined teams.  Iowa must also knock down more than a handful of three-point baskets if it hopes to come out on top. That means Josh Oglesby has to be in rhythm.  Devyn Marble and Zach McCabe are also equipped to hit threes, but a hot Oglesby increases Iowa’s chances to win dramatically.  That was the case at Northwestern (he was the only one who made a three-pointer, going 4-of-9).  Iowa’s players and fans don’t realistically believe that a Big Ten regular-season championship is in store this year–especially after an 0-3 start–but a win over Wisconsin is a big step toward the team’s first NCAA Tournament birth since 2006.