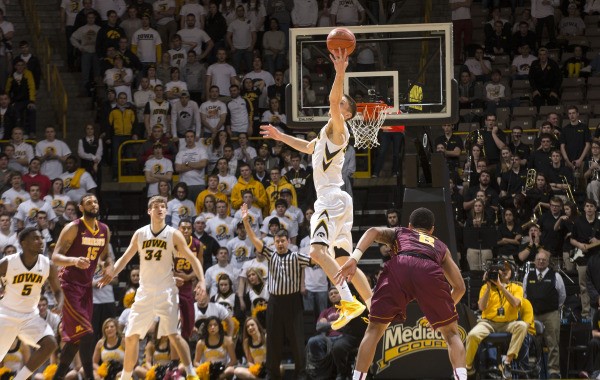 The first half was rather uneventful for the Hawks, Jok had a nice breakaway layup and the Hawks were up four at one point but they had an 8-minute stretch without a basket. Aaron White put an end to that with a 2-handed jam with one minute left in the half that gave Iowa a little momentum heading into halftime.

The Gophers went into halftime with a 23-19 lead.

The halftime show was one of the best ones this season. The AcroDunks are a bunch of high flying dunk artists which brought life back into the Hawkeye crowd.

The second half was better than the first half by a far margin. The Hawks regained the lead with 13-minutes left at 31-30. The teams traded baskets until Andre Hollins drained a 3 to put the Gophers up 39-37.

The Gophers had a 10 point lead with two minutes left and Uthoff nailed a 3 to cut the deficit to 7. Then the Hawks applied the all-out full-court press swapping Jok and Clemons for offense/defense.  Pulling within 5 with a minute left.

Jarrod Uthoff had a great leaping steal off an in-bounds play near mid-court and dished it to White for the dunk to make the score 59-56 with 56 seconds left. After fouling Minnesota and Hollins making both free throws to put them up 61-56 with 27 seconds left.

Iowa came back down the floor with a screen for Uthoff to pop a 3. Minnesota committed the cardinal sin of basketball fouling on a three-point shot. Uthoff drained all 3 free-throws to make it 61-59 with 20 seconds left.

Minnesota was fouled immediately and made one of two free-throws keeping it a one possession game at 62-59.

Mike Gesell drove to the hoop with 11 seconds left and ran right into Chris Walker with no foul called, Walker gained possession and iced it for Minnesota 64-59.

At times the Hawks looked gassed and that lead to some costly turnovers (16 total). Another issue was being gun shy shooting the ball. They became focused on execution and movement, Fran said “We were not a master of shooting when open tonight.”

Neither team shot well from beyond the arc tonight, which may have played a factor in Iowa being gun-shy from downtown.

Andre Hollins led all scorers with 20 and Nate Mason added 12 from the bench.

Woodbury had 4 points, 3 rebounds along with 2 assists before fouling out.

Off the bench Gabe Olaseni contributed 2 points, 4 rebounds and 3 blocked shots. Dominque Uhl chipped in with 2 points and 3 rebounds. Anthony Clemons added 5 points, he was also poked in the eye but after review it was unintentional.