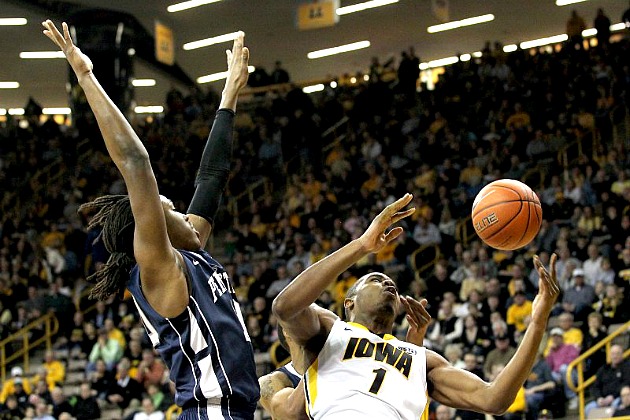 At 4-7 in the Big Ten and 15-9 overall, the Iowa men’s basketball team’s trip to the Bryce Jordan Center Thursday night to challenge Penn State is as important a road game as any the Hawks have had this season.  To this date, the importance stems from what Iowa has failed to do since Big Ten play started: win close games.  Before the conference slate began, Iowa’s fans, players, and coaches looked at the team’s trip to Happy Valley as just another road game.  Many likely thought (and still think) it’s winnable.  No one would mistake a trip to play Penn State at home in front of a few thousand blue and white-clad fans for a death march into East Lansing.

But if Iowa wants to creep into the NCAA tournament, they must win this game for a number of reasons.  First, the schedule the team has played thus far has left them in with a losing conference record in what is widely considered the best Division I basketball conference this year.  Iowa has lost five games by four points or less to conference teams, and was within two possessions late in a nine point loss at #13 Ohio State.  The NCAA committee may look at losses such as Iowa’s three point home loss to top-ranked Indiana or Iowa’s double-overtime loss at Wisconsin (keep in mind that the Badgers have won at Indiana and beaten Michigan) as forgivable, but the credit of being in a game until the end only extends so far.  Iowa must close out its last six games with a bang.  The Hawks are highly unlikely to gain an at-large NCAA tournament birth with a losing conference record.

Second, Penn State has not yet won a Big Ten game.  The Nittany Lions sit at 0-11 in conference and 8-15 overall, and are, without a doubt, the worst team in the conference.  Iowa has already vanquished the Lions at home, 76-67, in a tougher-than-expected game.  Upcoming Hawkeye opponent and conference third-tier member (that is, hanging with Iowa near the bottom of the Big Ten) Nebraska has shown improvement as of late, winning three of their last six conference games after starting 0-5.  The Cornhuskers have righted the ship because of good defense.  Illinois, another peer near the bottom, has won their last two conference games–over #1 Indiana at home and at #18 Minnesota after starting 2-7 in conference.  Casual fans may not know that Illinois had one of the best non-conference performances of any team in the country, beating Butler and Gonzaga (in Spokane, a tough place very far away).  The Illini also blew out Ohio State before slumping for most of January.  Still, Iowa is in the easiest portion of their schedule.

Throw those stats out the window, though.  As evidenced by Iowa’s first encounter with Penn State, Chambers never stops prodding his players to keep playing hard.  He will sit his team down and characterize Iowa as their best chance left for a victory, and he’s right.  Penn State closes conference play with only two games at home (after Iowa) in their last six–those two being Michigan and Wisconsin.

Close losses to good teams are frustrating for fans, but any loss to the conference’s worst team–especially if it’s Penn State’s first win in conference–will sicken fans and slap a figurative demerit on Iowa’s record under the spotlight of the committee.  Interestingly, Iowa has not won at Penn State since the ’05-06 season.  The incentive to win this game could not be greater.