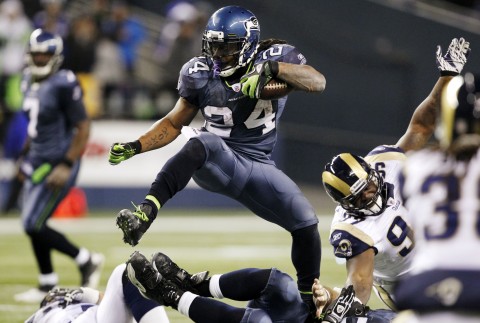 Prior to the start of the 2012 NFL season, the Seattle Seahawks were not on many people’s radars. They finished the 2011 season with a 7-9 record, were ranked in the bottom 10 of ESPN Power Rankings: Post Draft Edition, and would be starting rookie quarterback Russell Wilson.

They kicked off their season with a loss to Arizona, started down the road to redemption  – and the playoffs – with a controversial Week 3 win over the Green Bay Packers with a call that many believe was a key factor in ending the referee lockout, and went on to finish the season with an impressive, and surprising, 11-5 record, boasting wins against teams seen as far superior to them, including the Chicago Bears and New England Patriots.

As a result, analysts and NFL fans alike began to take Seattle more seriously and in the ESPN Week 15 power rankings, they broke in to the top 10 for good.

As their level of play steadily improved throughout the season, they still were not assured a spot in the playoffs because there were teams with better records who, with a strong finish, could shut them out.

All the pieces came together, however and when the Seahawks beat the 49ers in Week 15, they secured a spot in the postseason with their first 10-win season since 2007.

Russell Wilson had a standout rookie season earning a 100.0 passer rating and throwing for 3,118 yards, racking up an impressive 26 touchdowns along the way. When the Seahawks gave Wilson’s arm a rest with running plays, Marshawn Lynch led the squad with 315 carries for 1,590 yards and 11 touchdowns. His stellar play ignited the ground game for the offense and was instrumental in the Seahawks win against the 49ers. Scoring two first quarter touchdowns, he gave the team a huge confidence boost that carried them to a blowout win at home.

Bobby Wagner leads the Seahawks defense with 140 tackles and Richard Sherman intercepted quarterbacks eight times in the regular season. They allowed a league low of 245 points scored by opponents, are 6th in the league in opposing passing yards and 10th overall in opposing rushing yards.

The Seahawks take on the Atlanta Falcons (13-3) on Sunday afternoon at the Georgia Dome in hopes of continuing their unexpected playoff run. Both Lynch and leading receiver Sidney Rice are injured but listed as probable for Sunday’s game; missing either one of those players would put the Seahawks at an unfortunate disadvantage, before even considering the away-game atmosphere.

The Seahawks and Falcons did not play in the 2012 regular season; their last meeting came in 2011 and resulted in a 30-28 Seahawk loss. Tomorrow’s contest should prove to be a hard fought game. The Falcons are fighting to continue their impressive season and the Seahawks are aiming to prove that they belong in the post season.

Though the Falcons have home field advantage and a better record, the Seahawks are riding a six game win streak and Wilson has found a great rhythm with his first NFL team. I believe the Seahawks will ultimately upset the Falcons at home and go on to the NFC championship game.