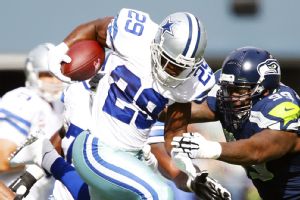 A strengthened defense, along with an outstanding rushing attack, has the Dallas Cowboys out to a fast start in the 2014 NFL season.

Yes, you read that correctly. The Dallas Cowboys are 5-1, after defeating the defending Super Bowl champion Seattle Seahawks 30-23 in Seattle.

How ‘bout them Cowboys?

This marks a five-game winning streak for the Cowboys who, after going 0-4 in preseason, dropped their regular season opener to the San Francisco 49ers.

Things didn’t look good for Dallas week one against San Francisco. DeMarco Murray fumbled on the opening drive, which was recovered and taken back for a touchdown by 49ers cornerback, Chris Culliver.

With three Tony Romo interceptions, the Cowboys had four total turnovers that against the 49ers and were unable to comeback 28-3 halftime deficit, losing 28-17.

Since then, Dallas has powered its way to a 5-1 record with wins over Tennessee, St. Louis, New Orleans, Houston, and Seattle.

What’s with the turnaround you ask?

The Cowboys entered this season with many questions after displaying what was supposed to be an NFL defense in 2013.

How bad was it? Bad. The Cowboys ranked dead last in defense in 2013 and had no answer when it came to halting the passing game. In 2013, NFL teams combined for 4,800 yards through the air, sending the Cowboys to a third straight 8-8 record. (Not to mention allowing a franchise record 6,645 yards in 2013).

Well America: Not this year.

A lot of the success on defense is accredited to the promotion of Rod Marinelli to defensive coordinator for the Cowboys. Prior to Marinelli, Monte Kiffin looked to rejuvenate the Cowboys defense by switching from a 3-4, to a 4-3, with little to no avail (please see Cowboys/Broncos 2013 box score).

The biggest difference for the Cowboys defense is the play of their linebackers and in the secondary. Many wondered if Dallas could bounce back after middle-linebacker, Sean Lee, suffered a torn ACL prior to the 2014 season. The play from guys like Barry Church, Justin Durant, Rolando McClain, J.J. Wilcox, and Bruce Carter have made the Dallas defense a much more respectable group. Dallas now boasts the 15th ranked defense in the league, a far cry from the 2013 ranking of last.

The defense allows for Dallas to open up the playbook offensively too. In 2013, there were too many times where opposing teams new that the Cowboys would abandon the run game early, because they had so much ground to make up.

How about that Cowboys offense?

It’s hard to believe that I have gone this long about the Cowboys 5-1 record without mentioning the dominance DeMarco Murray has displayed. The offensive game plan for the Cowboys this season has been simple:

Run the ball. A lot.

Murray, in his fourth season with the Cowboys, has rushed for league-leading 785 yards and is averaging 26.5 carries through six game. That average is  ten yards more than in his 14-game average in 2013. Murray is tied with Jim Brown at six for most consecutive games with 100+ yards to start a season.

The fact that Murray leads the league in rushing gives Tony Romo plenty to be happy about.

Romo underwent surgery last December to repair a herniated disc in his back. He’s coming off a great 2013 campaign where he chucked 31 touchdowns and threw only ten interceptions. He’s off to a fast start in 2014 with 11 touchdowns and five interceptions and just outside the top ten in passing yards.

The running game for the Cowboys gives Romo the ability to not screw things up. While I’m a firm believe that Romo isn’t always to blame for the unfortunate fourth quarter interception, it’s hard to take the blame away from someone holding the smoking gun. Am I right?

Romo has been a beneficiary to the dominant ground game due to the fact he isn’t dropping back to pass all the time, which is keeping him out of dangerous situations with potential for injury.

While it’s all high-fives and happy times in Arlington, Texas; the Cowboys still have a lot of hard work ahead of them.

Dallas has a week 11 bye, but prior to that they face the New York Giants, Washington Redskins, Arizona Cardinals, and the Jacksonville Jaguars.

While the NFC East has a left a lot to be desired (who really knows what the New York Giants are going to do this year?), the Cowboys will look to capitalize on the next four games.

While winning four more in a row could be tough, there is a strong possibility Dallas goes 3-1 over the next four weeks. That means the Dallas Cowboys could be sitting at 8-2. If the Cowboys could go 8-2, they would just need one more win to avoid another 8-8 season.

This team has higher aspirations thought.

The Dallas Cowboys have a legitimate shot to win the NFC East and make the playoffs this year. America’s Team has a chance for something special this year, let’s just hope they can continue what they’ve been doing so far in 2014.