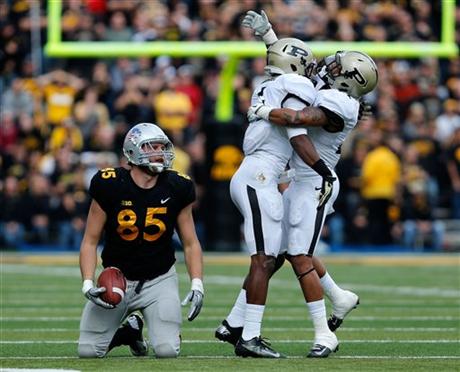 I feel it is my journalistic duty to admit when I am wrong. Well… I was wrong. A month ago I wrote an article praising the Iowa Hawkeye Football team for their heart and resiliency after winning their first two Big 10 games. A month has passed and I have a different outlook

I am not going to be the one to question effort because I thoroughly believe the Hawks are giving their best effort week in and week out. What I am going to question is something that is so blaringly lacking on this team it’s sickening. That thing is speed. The Hawkeyes are slow. They are slow on offense and on defense. On offense they don’t have a deep threat or an intermediate threat at  wide receiver. The offensive line is not performing well. On the other side of the ball, speed backs and receivers eat the Hawks defense alive.

What does this lack of speed and athleticism add up to? A likely 4-8 season. A season that has Hawkeye faithful suggesting that Kirk Ferentz is on borrowed time. The offense has been much to blame for the struggles. James Vandenberg has been dismal. After throwing 25 touchdowns last season he as thrown just five this season. The receiving core is plagued by drops and disappointment.

As bad as the offense has been, the defense in the last four games has been just as bad. Since the Michigan State game, the Hawks are giving up, on average, 475 yards per game. They miss a lot of tackles, they are undisciplined, and to top it off, like I said earlier, they are slow.

When a team has a dismal season such as the one the Hawkeyes are currently in, fans always want to look for hope. They want to see a rare bright spot. Two seasons ago Marcus Coker’s breakout game in the Insight Bowl was that bright spot. This year, there are none. There is no reason to be excited about what is coming back next year. There are no signs that this team will be improved.

Kirk Ferentz better be worried because if he has another season similar to this one, then he will be on borrowed time. At the same time, another season like this one looks very possible.