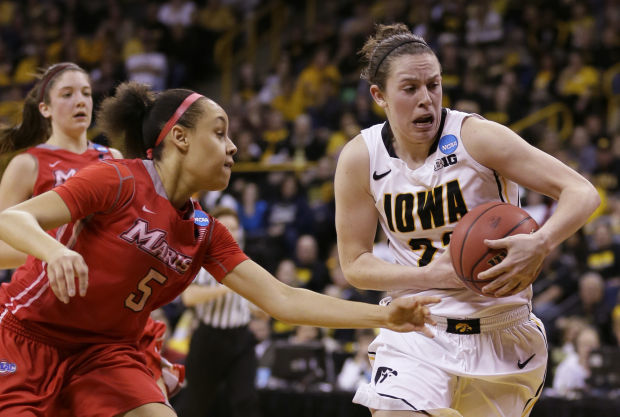 Lost at Carver-Hawkeye Arena, but as the technical “road” team? Check.

Rough night beyond the arc? Check.

A year after dropping a 74-57 decision to Notre Dame, in a game where the Hawkeyes missed all 11 of their three-point attempts, the sixth-seeded Iowa women saw their season come to an end at the hands of the third-seeded Louisville Cardinals, falling to the nation’s No. 4 team 83-53.

The Hawkeyes missed their first 15 three-point shots, with only a Melissa Dixon three-pointer with 2:21 to go saving the Hawkeyes from another three-less game in Round 2. The 1 for 16 performance was far below Iowa’s season average of 34%. Louisville, on the other hand, shot 53.1% from the field and knocked down nine three-pointers.

Iowa had played the Cardinals even, 11-11 through the first four and a half minutes of the contest. Iowa head coach Lisa Bluder said Louisville’s defensive effort, as well as her own team’s inability to score, allowed the Cardinals to take control.

“I felt like for some reason we went away from things that were working for us in the first few minutes of the game,” Bluder said. “They did a great job defensively, and I thought they did a nice job of really keeping the ball out of Sam (Logic)’s hands.”

Louisville’s defensive effort forced 19 turnovers from the Hawkeyes, including nine from the typically sure-handed Logic. The Cardinals capitalized on Iowa’s mistakes, scoring 20 points off Iowa miscues. Louisville’s own star guard, Shoni Schimmel, had no such issues, scoring 26 points, dishing out 7 assists, and recording 5 steals and 5 rebounds.

The brightest spot for the Hawkeyes was the performance of freshman Ally Disterhoft. The Iowa City native poured in 15 points, and grabbed 8 rebounds to cap a sensational rookie campaign, in which she posted the second highest freshman scoring total in school history, behind only Jaime Printy.

The Cardinals return home to the KFC Yum! Center in Louisville, Kentucky for the Sweet 16 on Sunday afternoon. Louisville will battle seventh-seeded LSU with the winner facing the Tennessee-Maryland victor for a trip to the Final Four.

“It’s a big advantage, but it isn’t going to guarantee a win,” Louisville head coach Jeff Walz said of playing at home. “The familiarity you get from being able to play at home, I hope we can take advantage of it.”

As for the Hawkeyes, Iowa finishes with a 27-9 record, the highest win total in the Division-I coaching career of Lisa Bluder, and the second-highest in Hawkeye history. Iowa will likely return four of its five starters in 2014-15, losing Theairra Taylor. Bluder was at a loss for words when asked to describe Taylor’s career at Iowa.

“The team loves her,” said Bluder, who was overcome with emotion. “We wanted this for her really badly.”

Taylor said her memories of Iowa basketball won’t be defined by a disappointing loss in her final game. Rather, she stated shewill remember the successes, and bonds she forged as a Hawkeye.

“I’ve played with so many players, and they still contact me now,” Taylor said. “Building those relationships that last longer than those basketball memories, that’s what I’ll remember most.”