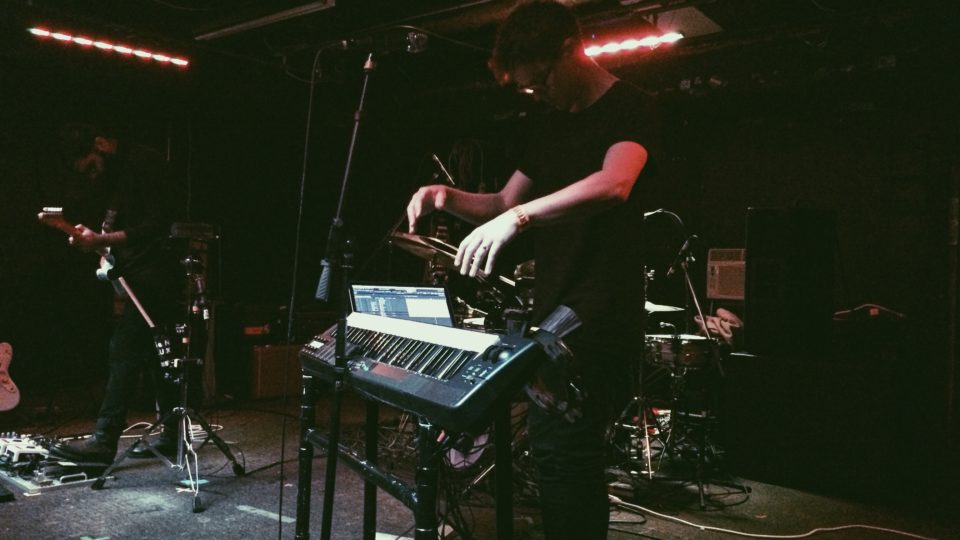 Son Lux is bringing their show to day two of Mission Creek Festival 2016. But up first, Field Division opened to a crowd of a little over a dozen on the second floor of Gabe’s in Iowa City. Evelyn Taylor and Nicholas Frampton were the duo onstage, drawing the small crowd in with their dreamlike folksy vibe. I took it upon myself to become familiar with the band’s sound a few days ago, and right away I noticed the way Taylor’s outrageously smooth vocal abilities are able to perform just as neatly as they do on record.

About three songs in, Frampton takes lead vocals, and the duo’s harmonizing strengths become evident in this folksy swaying tune. Field Division proclaims their “dreaminess” in their music, arching to convey a fluid journey through both their lyrics and sound. I noticed, however, the way the dreaminess in their recorded instrumentals somewhat slips away in a live atmosphere. But where the dreaminess is lost in live acoustic guitar’s melody, it comes out in the bluesy electric guitar element they’ve added onstage with a third player.

They then promoted their EP, released in October of 2014, with a song I recognize called “Modest Mountains.” The duo describes the tour they went on to embrace the mindset of this song, which they recently made a music video for. They then closed their set with a catchier harmonizing tune, proving once again that they excel in vocal captivation. The opener’s set (and Taylor’s black boho-esque attire) leaves me both pleased and aesthetically envious.

The next opener takes me by surprise, and not exactly the pleasant kind. Next to take the stage is a group from Chicago, who call themselves Good Willsmith. They fill the room with an electronic intro, resembling distorted white noise, in an energetic build-up—or so I thought. This band is capable of one thing and one thing only: a mountainous tumbleweed of noise, in which I am waiting for what feels like an inevitable and satisfactory drop, but it’s that kind of relief I never got.

I would perhaps describe it as a spaceship malfunction. Overheard at a table near where I sit is a man recapping his own interpretation of the music to his neighbor: “…a bunch of sounds kind of… fucking stringed together”. Maybe not so eloquent, but accurate nonetheless, man in the striped crewneck tee. According to their Facebook page, the band classify themselves as “drone/noise/psychedelic/improv”. I can’t say I disagree, but I’m also not sure it’s a genre I would submit myself to again in any scenario. Simply and bluntly put: the Good Willsmith live experience was disengaging monotony.

However, I end this set on a less negative note with a nod to the guitarist. Decked out in a wide brim cap and a corncob printed on his t-shirt, he really did let that prolonged spaceship malfunction they call music course through his stage presence. I respect his ability to connect with your internal musical being, even if I got nothing out of it myself.

It wasn’t until the headlining act that I felt completely engaged in the show. Son Lux brought the energy that was missing, something reciprocated in full by their audience. This has almost everything to do with lead Ryan Lott’s powerfully engaging vocal capacity. Notably a few songs in, his hollowed projecting vocals convey the utmost emotion and vulnerability.

Good Willsmith was obvious amateur foreplay to the way these guys can manipulate a beat. Where their opener lacked in vocals, Son Lux picked up the slack and showed that they are capable of intertwining synthesizing instrumentals in a diverse fashion, while also complimenting them with a strong leading voice. Take-away lyric of the night: “You drink your wine from my heart.”

Son Lux thanked the audience for “a warm welcome” for the group’s first time in Iowa City. The audience is notably affected by the way this trio performs onstage. Climactic builds and drops of songs are especially effective in this live environment, earning sincerely ecstatic applause from their crowd. Feeding into the crowd’s evident enthusiasm is Lott’s theatrically involved singing, an obvious lead in stage presence. This being said, the drummer’s exuberant play and carefully executed drum energy is not be ignored.

As the last song draws to a close, and Lott detaches his mic from the stand above his keyboard to do some back and forth with the rowdy audience members, I come to the conclusion that a live show is most definitely the place to familiarize yourself with Son Lux. The interaction between deeply invested vocals and inevitably toe-tapping instrumentals is, for lack of a more specific or concrete explanation, an experience. And one I would eagerly repeat.