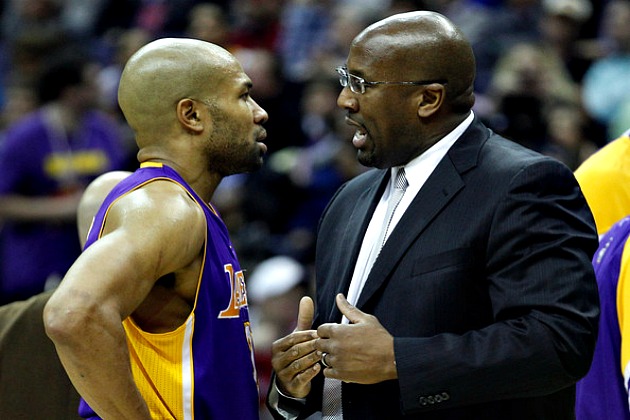 Don’t Lose Your Mind: On Thursday, former Maryland men’s basketball coach Gary Williams told a Washington radio station that the Kentucky Wildcats could defeat the Washington Wizards in an exhibition game.  Mr. Williams has just earned a spot on this week’s starting Bottom 5 team for that ludicrous comment.  Yes, the Wizards are horrible this year, as their record currently stands at 11-38, and they’re the second worst team in the NBA right now.  I also believe that Kentucky will be national champions on Monday, with four of their players likely high-round draft picks in June.  I am not taking anything away from Kentucky.  They are outstanding as a college team.  Orlando head coach Stan Van Gundy put it best by saying, “Kentucky may have four NBA players on their team, but Washington has thirteen and besides, when was the last time a team won using just rookies?”  Thank you Mr. Van Gundy for pointing out Gary Williams’ stupidity.  No matter how good a college basketball team is, it can never beat an NBA team.

No Fish in this Lake: Derek Fisher made his triumphant return to the Staples Center on Thursday night as a member of the Oklahoma City Thunder.  I have previously nominated the Lakers’ front office in an earlier edition of my Bottom 5, but the nomination this week goes to the entire Laker roster and the coaching staff.  They get the nod here because they suggested to the Lakers front office that they can win a championship without Fisher.  They initially dealt him to Cleveland, a team well out of the playoff race, but he ended up clearing waivers and signing with the Thunder—the number one seed in the Western Conference.  Fisher may have the last laugh—as he defeated his former team on its home floor—and the Thunder are my favorite to win the Western Conference and advance to the NBA Finals.  What I do not understand is why the Lakers would want to dump Fisher anyway, because of his veteran presence in the locker room?  He has been on the team as long as Kobe Bryant, and the only member of the team that previously could have told Bryant what to and what not to do.

Bitter Departure: The reason I came up with the title for this week’s edition is because of Donovan McNabb, the third lucky recipient of my Bottom 5 distinction.  Recently, he insulted his former coach Mike Shanahan by saying [Shanahan’s] system would waste Robert Griffin III’s talents.  RG3 is projected to be the 2nd overall pick in the draft, and the Redskins are extremely close to reaching a deal with him before they select him officially on draft day.  However, McNabb, who is most likely feeling the bitterness of being let go by the Redskins, took cheap shots at his former team’s offensive game-plan, saying they would not play to RG3’s strengths and that the team would have him run plays that would not benefit him.  Maybe McNabb is just jealous that the team found a suitable replacement for the bumbling QB, or maybe Momma McNabb just won’t cook her son Campbell’s Chunky soup anymore due to his homeless-man beard.  Either way, McNabb should have some class and move on.  I hear the Arizona Cardinals need some QB help, so try there or head down to the unemployment office.

No Love Lost in Montreal: Thursday morning, the Montreal Canadiens fired their General Manager  Pierre Gauthier after the team compiled an abysmal 29-24-14 record, second-worst in the NHL.  While the team is scrambling to find their next GM, rumors have begun swirling about relocation.  Quebec City, the province’s capital, wants the NHL to return, so the Canadiens may be on the move.  While the Phoenix Coyotes are the likely favorites for relocation, Gary Bettman, the NHL’s commissioner, may not want to move the an NHL franchise out of Phoenix after such a hard and grueling process to get a team there in the first place.  However, growing unrest about the failure to get the Habs to the Stanley Cup Finals has been dreadful to watch.  Pressure continues to grow because of Canada’s immense pride in hockey.  They did get close two years ago, coming off a major upset over the number one seed Washington Capitals and the Pittsburgh Penguins, but they have not reached the Stanley Cup Finals in a long time.

U.S. Declining in Men’s Tennis: Tennis is not a sport I follow very closely, but I have noticed a serious drop in the number of great American male tennis players.  How many people can name an elite, current U.S. men’s player?  I can’t, and the only one who come to mind are the long-retired Pete Sampras and Andre Agassi.  Novak Djokovic, Rafael Nadal, and Roger Federer garner almost all of the attention in men’s tennis, while Andy Roddick pops up here and there as the U.S. number three behind Mardy Fish and John Isner.  While Fish is number one in the U.S., he is more off the radar than Roddick, perhaps due to Roddick’s apparent celebrity.  So, where are the U.S. players on the international level?  If the U.S. could generate some international stars, we could get on the map and spark more interest in the sport.  As it stands, men’s tennis will continue to devour the back pages of print and side links of sports websites unless a Federer vs. Nadal matchup occurs.