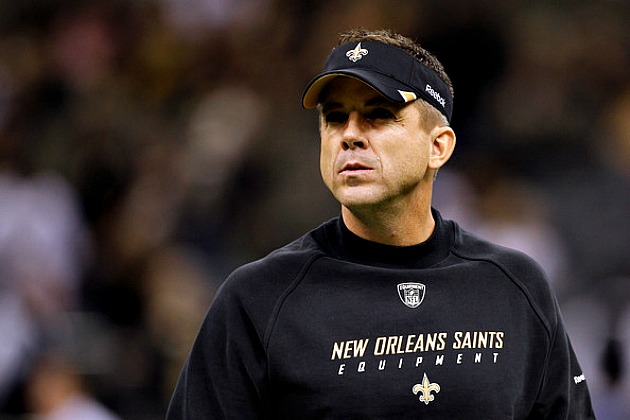 Unhappy Saint: The NFL has lowered its shoulder on New Orleans Saints head coach Sean Payton for running a bounty system in New Orleans, crippling the Saints chances of being the first NFC South team to win its division in back-to-back years since the division first formed in 2002.

While defensive coordinator Gregg Williams was initially said to be the ringleader, Payton knew about the system and did nothing to stop it.  As punishment, Payton has been suspended for the upcoming 2012 season and fined a whopping $5.8 million.  The NFL needed to make a stand here and while I bashed Gregg Williams for the bounty system in another edition of my Bottom 5, Sean Payton gets the unwanted recognition of making my list this week.  Maybe the Saints should stop turning football into a blood sport and find a way to win playoff games, which has been a serious issue for this franchise throughout its history.

Sorry Soria: Recently, Kansas City Royals closer Joakim Soria will undergo elbow surgery and miss the entire 2012 season.  The Royals have not been relevant in baseball since 2003, but many baseball analysts have predicted positive results for the Royals this year.  Injuries happen in baseball—and it is unfortunate that Soria is in my Bottom 5 this week—but no team can make a playoff berth without a good closer.  This also affects hundreds of fantasy baseball rosters, but not mine.  I do not expect the Royals to do anything this season except finish last in the AL Central, and with Soria on the shelf for the whole year, that is the most likely scenario.

Clipping Del Negro?: The Los Angeles Clippers are fading fast in the Western Conference playoff outlook.  While many bandwagon and recent NBA fans see this as a surprise, the Clippers are considered one of the worst franchises in any of the four major U.S. sports, let alone the NBA.  Sources have pointed out earlier this week that head coach Vinny Del Negro has lost command over his players and they no longer desire to play hard for him.  They are currently in the sixth spot for the playoffs, but one game separates them from the ninth spot (and watching the playoffs from their couch).  Perhaps a coaching change is in order right now, but one thing is for sure: Del Negro has had a history of motivating his players during his days with the Bulls, but perhaps he is not cut out for coaching in the NBA.

NCAA Brackets: This is pretty obvious here, but I just wanted to point out a few things from NCAA tournament brackets.  ESPN has the most-used NCAA men’s and women’s bracket out of any other sports websites.  However, I should point out that since ESPN started those back in 1998 online, no one has ever predicted a perfect bracket.  This is a statement to the fans: you don’t know squat!  This is probably the most bizarre Bottom 5 nomination I have ever done, but it needed to be done nonetheless.  The people who fill out ESPN brackets—average people, sports stat gurus, and celebrities alike—can never call a perfect bracket.  Norfolk St. and Lehigh are this year’s biggest bracket busters, and that’s just a start.  Who would have ever thought that Louisville, an early exit last year, would best Michigan St. in the Sweet 16?  Not many fans predicted that.  What boils me the most is that I often hear people say that “so and so” has a walk to the Final Four!  Newsflash people, NOBODY has a walk to the Final Four, no matter what seed they are.

Greek Soccer Violence: For lack of a better title, the final Bottom 5 nomination I have this week is for The Greek soccer club Panathinaikos.  This past week, there was a violent fan riot at their stadium with archrival Olympiakos that left 20 policemen injured.  Sports fans need to take their passion down just a bit.  I know this is hard to do in European soccer leagues.  I also know that Greece’s recent financial indebtedness played into the recklessness and frustration behind the riot, but they have already had enough tumult on the streets.  Leave the game alone!  As punishment, Panathinaikos has been docked 3 points and must play four home games without any spectators.  What an humiliating scenario.  I guarantee that next year, people will think that not having any fans at your games will be the ultimate insult.  Who wants to play in front of empty seats?