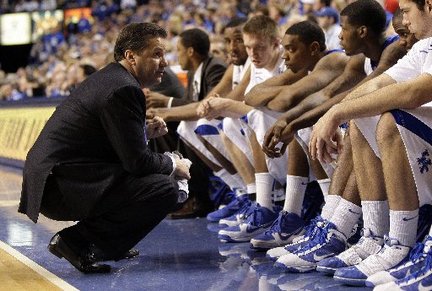 There’s no doubt that Kentucky’s men’s basketball coach John Calipari knows how to recruit. Since he was at Memphis, he’s been known for sweet-talking some of the best four- and five-star recruits into coming and playing basketball for him.

In return, Calipari practically guarantees that these collegiate stars can head to the NBA by the end of their freshman year.

It began with Derrick Rose. During his tenure at Memphis, Calipari turned the Mid-America school into a national basketball powerhouse. In the 2007-2008 season, he had then-freshman Rose lead Memphis all the way to the NCAA national championship game. Rose and the Tigers ultimately lost the game to Kansas, 75-68.

Nonetheless, young Derrick was a force to be reckoned with during that entire college basketball season. He was only a freshman, but he tore up teams left and right.

And just like that, he left. He has since been the youngest NBA player to win an NBA MVP award. He plays for the Chicago Bulls.

But Derrick wasn’t the only one. Soon after, a young man by the name of John Wall came along. He, too, played under Calipari—this time more recently at the University of Kentucky.

John Wall was not only a leader for the Wildcats that year, but he was a national phenomenon. He created the most exciting plays since the ‘08 Kansas team. He was the most electrifying basketball player since Reggie Miller.

The kid walked out on the court to his own song for crying out loud.

Wall led the Wildcats to the NCAA’s Elite Eight that season before losing to West Virginia.  Soon after, Wall declared for the NBA Draft and left for a professional basketball career. He now stars for the Washington Wizards, dance and all.

These “One ‘n Done” scenarios are something that Calipari is known for. He’s always been able to recruit many of the top McDonald’s All-Americans from around the country. In return, such freshmen sensations will guide one of the top teams in the land as far as they can. Once that’s over and done—with a national championship or not—they can potentially receive paychecks a year later.

It’s been frowned upon by experts, yet Calipari’s teams continue to win. Kentucky and Memphis are both proof of it. Under Coach Cal, Memphis was 105-10 between the 2006-07 and 2008-09 seasons. Those seasons were the beginning of his “One ‘n Done” schemes. That tactic led to an average of 35 wins a year with the Tigers.

Once he jumped to Kentucky, the success only continued, as well as the “One ‘n Done’s.” John Wall was the first one to go. But just last season, Calipari had three talented freshmen headline his Wildcat roster: Brandon Knight, Terrence Jones, and Doron Lamb.

After a 29-9 record, an SEC Championship and National Semifinal season, all three of the freshmen were on lock to be drafted to the NBA. If the picks fell right, all three of them could have been taken in the first round.

As it turns out, only Knight left the team. He currently stars for the Detroit Pistons.

Jones and Lamb passed up millions of dollars to sit back and watch this year’s Wildcat freshmen guide the number one team in the land.

Anthony Davis is the most notable, as he’s not only in line to possibly be the number one overall pick in the next NBA Draft, but he’s also a contender for college basketball’s national player of the year honor. The monster frosh leads Kentucky in scoring and rebounds per game.

The other two notable freshmen are Michael Kidd-Gilchrist and Marquis Teague. All three prospects are projected to not only enter the draft after this season, but to be high picks.

What is it about this “One ‘n Done” game-plan that has every one of Calipari’s teams not only ranked among the top teams in the nation, but to have his young guns NBA-ready in a matter of months?

Some famous athletes you may have heard of include Kevin Durant and Kevin Love. Both are now NBA All-Stars and have stuffed their trophy cases and lined their home’s walls with awards.

Heck, even Duke’s Kyrie Irving left after two semesters of classes. Duke has only let a grand total of nine players leave early in its storied history. Only nine. Ever.

Calipari could possibly tie that number in about two months.

But no need to worry, UK fans. If Davis, Kidd-Gilchrist and Teague do decide to leave at season’s end, Coach Cal already has the next set of superstars geared up for battle. Already signed to play for the Wildcats next season are Archie Goodwin (No. 4 Overall SG), Alex Poythress (No. 3 Overall SF) and Willie Cauley (No. 10 Overall Center).

No matter who comes in for a year on John Calipari’s basketball team, they win. This “One ‘n Done” formula works to near perfection. There’s no doubt about that.

The only oddity is that Calipari has yet to win the national championship with this newly found game-plan. Maybe if he were to hang on to some of his recruits, he’d have a couple of rings by now.

Then again, why let them hang around when they’re already NBA ready?

One response to “The Calipari model: one ‘n done”