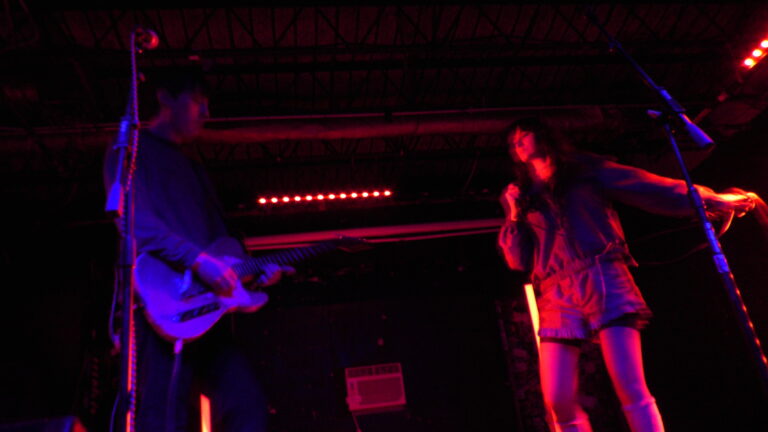 When I first arrived at Gabe’s on the night of April 7th, I was greeted with two signs, one informing me that the Corridor show was canceled and another giving an epilepsy warning for the Tempers show. Corridor had a case of Covid-19 in their band and had to call off this leg of their tour last-minute. Iowa City artist Lake Villain put on a neat electronic set to open the show, but in the couple of hours that followed, the quiet emptiness of the room weighed heavy. It would be up to Tempers to save the night.

My main curiosity going into this show was how this two-person band would operate. Of course, Jasmine Golestaneh sings while Eddie Cooper plays guitar, but like much of their catalog, Tempers’ most recent album New Meaning is full of pounding beats and has an ethereal atmosphere. How would these two capture their music on stage? Not unexpectedly, the third member of Tempers is a Macbook that sits to the left of the stage, playing through the setlist of songs with just enough time in between for the audience to applaud and for Golestaneh to voice a quiet “thank you”. It covers the drums, synth, bass, and any other tones not made with guitar or voices. This fits with the tradition of darkwave and wasn’t too surprising, even if part of me hoped a secret third member would hop out of the shadows to tap a launchpad or midi keyboard. Unfortunately for anyone hoping to join the band as a touring musician, people and instruments take up vital space in the touring van reserved for Tempers’ assortment of flashing light fixtures.

Even with my preference towards live instrumentation at shows, I’m glad to say that the personality Tempers brought to their performance made up for it completely. Golestaneh displayed a rawness in her vocal performance, which is only hinted at on the band’s records. She is a rare vocalist that knows exactly how to excel with reverb. Cooper’s laidback guitar lines allowed him to pull off some infectiously groovy dance moves while playing, and the minimalist playing made his tremolo freakouts all the more exciting. They boldly played what is probably their biggest song, “Capital Pains,” in the first half of their set. Their mastery and energy during this song and many others was clear. Occasional waves of feedback would crash into the set, which only served to elevate the intensity of the performance. Tempers puts on a great show, inspiring chill dance moves and moments of high transcendence.