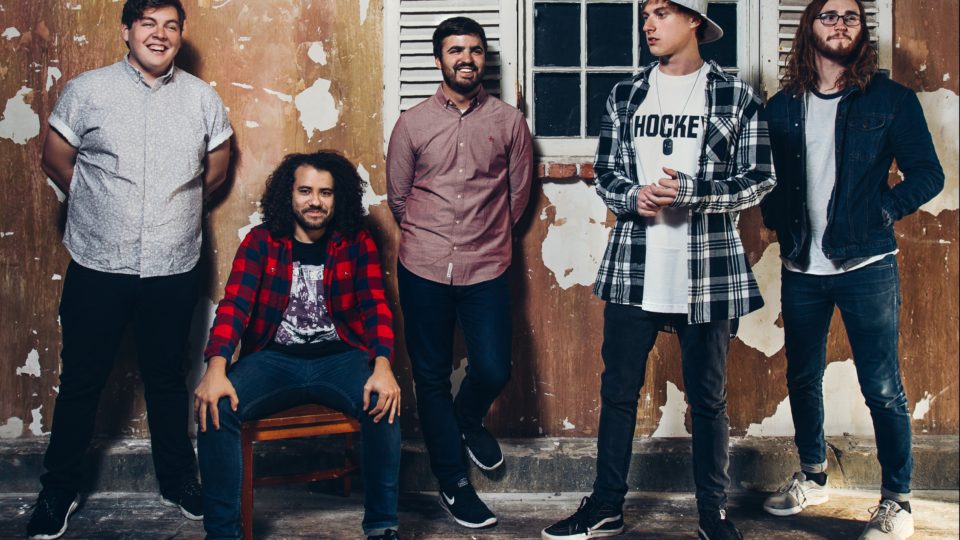 There’s nothing quite like a pop punk show at Gabe’s in Iowa City. The twinkling lights that dangle from the ceilings, the kids that rashly run around the mosh pit, and most importantly the intimate vibes between bands and fans as a result of the smaller environment. This State Champs concert was no exception.

Iowa City’s very own Starry Nights came on stage, a pop punk “witchy” “queercore” band (as described by their Facebook page.) Lead singer Kate Kane leaned in the microphone and let out a whiny “Hiiiii,” before jumping right into their first song. Their fast riffs and powerful drums were held up by Kate’s strong and wailing voice. They powered through their short setlist, stopping only to take sips of water and a mumbled “Thankssssss, you guyssssss.” They were clad in dark t-shirts and tattoos. (As you would expect from any pop punk band). They drew in a smaller crowd, but nonetheless they got the crowd prepped for the next acts.

Up next was a pop punk band from Cedar Rapids, Iowa (shout out to my hometown) called Know The Ropes. Aside from some relatively familiar faces on stage, lead singer Ryan Ask kind of reminded me of Parker Cannon, lead singer of largely-known pop punk band The Story So Far, not only in his husky scream-filled voice but also in his stage presence (besides the whole Parker drop kicking fans off stage part). Ryan would start the song with his back shyly facing the audience and his head hung, before the music engulfed him and they all head-banged and danced around the stage. It was really fun to watch them live, even not having known any of their songs before.

From Des Moines, Iowa, the next band up was Words Like Daggers. Their alternative sound brought a different vibe to the venue, the crowd enjoying the change in pace. The lead singers unique and silvery voice was backed by fast paced guitars and vigorous drumming, pumping the larger crowd up. They played a lot of songs off of their latest release, Perfect Weather. While I do enjoy alternative music, I found myself eager for Words Like Daggers to finish up and for State Champs to take the stage.

The wait for State Champs wasn’t painful, but actually memorable. Gabe’s, like most venues, plays songs between acts. However, this night the music was especially great. They played the latest Pierce The Veil track, a popular tune from Neck Deep‘s latest album, a PVRIS song, and most memorably, Sum 41‘s infamous “In Too Deep” from 2001.

The crowd jammed out to the nostalgic song as crew members set up the stage. It was a nice moment during the show that brought on a sense of unity throughout the crowd, and reminded me of why I fell in love with pop punk in the first place.

Finally, the moment we were all waiting for. State Champs, a pop punk band from Albany, New York, took the stage and opened with “Secrets” off of their latest album Around The World And Back. Girly screams shook the room and the tiny space between you and the person in front of you was suddenly closed as fans pushed their way to get closer to the band.

“We didn’t want to miss Iowa City!” said frontman Derek Discanio. State Champs took an off-day from their tour with A Day To Remember to perform at Gabe’s in Iowa City, a city they haven’t been in since October 2014 (click here for some footage of that concert).

Derek’s vocal chords range from low and throaty to high and ringing, making their pop punk sound a unique one in the scene. The crowd was definitely not still, with a mosh pit in the middle of the venue that was encouraged by the band members themselves. While my friend and I mainly stayed to the right and jumped up and down with the crowd, punk kids let themselves go in the mosh pit and ran rampant.

A lot of people also opted for crowd surfing, even though most of the people towards the front were us girls with chicken arms and wobbly legs. Nonetheless, it’s fun to watch people hold up the sweaty bodies of kids who just want to get close to the stage.

The songs they played came equally between their two most recent records, some songs being:

Check out State Champ’s latest record Around The World And Back below!